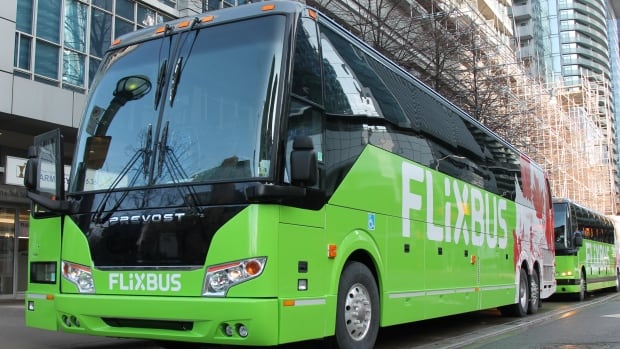 
FlixBus, a German company that says it’s the world’s largest-reaching bus provider, launched its Canadian operation this week in Toronto.

“It’s a dream bus market for us,” said Pierre Gourdain, managing director of FlixBus North America, about rolling into Toronto with three flashy green coaches to start routes in Ontario.

That may sound like encouraging words for bus passengers and transportation advocates who felt abandoned when Greyhound pulled out of Canada in May 2021.

The sleek silver dog had been limping along for years, saying many routes it had licences to operate weren’t sustainable before the pandemic stripped to the bone whatever market Greyhound had left.

Experts say the arrival of FlixBus, which operates in 37 countries serving more than 2,500 destinations, is good news for bus customers, but it’s not clear if it will help underserved communities and whether private bus operators can create a national bus network without government support.

“Given the catastrophic situation of the industry and the poor level of service we have in the country, that’s a really complex question,” said Jean-Baptiste Litrico, an associate professor of strategy at the Queen’s University Smith School of Business in Kingston, Ont.

In essence, FlixBus is a tech company that partners with local bus companies who own the coaches and hire the drivers.

It provides a ticket app and website, a pricing structure, route planning, and marketing, charging a 25 to 30 per cent commission on sales.

The FlixBus plan is to establish profitable high volume routes between Ottawa and Toronto, Niagara Falls and Toronto and Waterloo and Toronto before developing routes with less demand.

The company is moving into Canada after the nation’s largest province opened up its intercity bus industry to competition last summer. Deregulation in Ontario offers FlixBus and other carriers access to routes Greyhound couldn’t go after when it was here.

Flix also does research on customer demand and demographics and according to Gourdain, several key factors make Ontario and Quebec a “dream bus market” for the company.

Gourdain said the provinces both have a “crazy high student population” and a lot of foreign students, who are frequent bus customers.

The company also sees potential customers in the roughly 30 per cent of Toronto households that don’t own cars, and Gourdain believes their ticket app will appeal to the high number of Canadians who shop online.

Where to next? Not small towns

This summer FlixBus plans to start cross-border routes into the U.S. from Ontario and B.C. The next priority will be to get a licence for routes in Quebec, where regulation remains a barrier to accessing the market.

The company isn’t rushing to create a national network or reach underserved communities, though some smaller destinations may come later.

Gourdain said all bus carriers are struggling to recover from the pandemic, and FlixBus is no different.

According to the American Bus Association, which tracks the industry in both the U.S. and Canada, almost 24 per cent of bus carriers went under in 2020, and in 2021 revenues were still 62 per cent below 2019 levels.

“First you start the Tier 1 routes, so be a bit patient with us,” said Gourdain.

Several regional carriers have maintained and even tried to expand service over the past few years in different parts of the country.

Saskatchewan-based Rider Express is trying to span a big part of the country.

After starting out with two large vans for a Regina to Saskatoon route in 2017, Rider Express has grown to 20 buses, with plans to add another five as soon as possible.

Using Rider Express and its partner Ontario Northland, customers can travel all the way from Vancouver to Toronto. It also has a number of routes in the western provinces.

It’s not an easy business, he said.

“So that’s how we operate.”

“I don’t think they’re going to run those small cities,” he said.

However they will be rivals on the Toronto-Niagara route, which Rider Express is starting as well.

Can this new player in the Canadian bus business help the sector turn a corner for the better? 1:55

FlixBus also does interline with other bus companies, selling their tickets on its platform. But collaboration alone won’t solve the problem of servicing thinly populated areas in such a large country.

In Canada, said Litrico, “it’s a problem that we see over and over again, in a number of essential public services, not just transportation.”

With FlixBus being valued at more than $3 billion, and having bought Greyhound’s U.S. operations last year, it’s not asking for government support. Gourdain said help should go to small operators, to create more jobs.

Uray said the government could help with fuel costs for operators in small centres or “by purchasing small vans for the local bus companies” in underserved rural areas.

Not matter what the approach, Litrico said governments have to address “how to protect and maintain the level of service that’s equitable.”