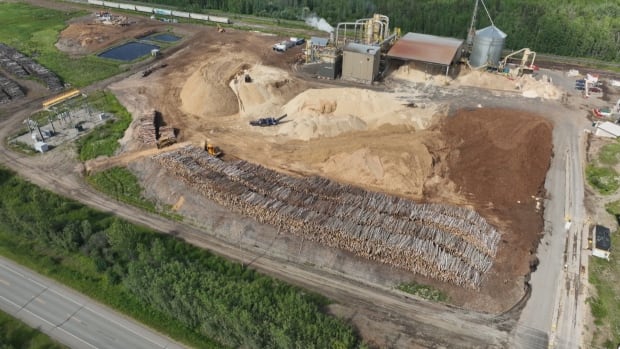 
From the highway just south of Prince George, B.C., you can see the logs, thousands of them, piled neatly in rows.

They were cut from trees in old growth and primary forests in the province’s Interior.

This timber won’t be used to build homes or furniture, or even to make paper. These logs will be ground and compressed into tiny pellets, shipped to Europe and Asia and burned to produce fuel for electricity.

The industry and the B.C. government pitch wood pellets as a renewable source of energy that will help countries meet their climate targets, and as a way to create jobs in the forestry sector.

An investigation by CBC’s The Fifth Estate has found that Drax catapulted a small industry it says is green into an investor-driven, international operation dependent on logging in areas that include B.C.’s old growth and primary forests.

Activists, scientists and environmentalists argue that far from being green, wood pellet production generates few jobs and actually makes the climate crisis worse. And they say it’s all happening with the support of B.C. Premier John Horgan’s NDP government, long criticized for being too close to the forestry industry.

“The greenwashing of the pellet industry needs to stop,” Bob Simpson, the mayor of Quesnel, a town in B.C.’s Interior whose fortunes rise and fall with the forestry sector, told The Fifth Estate.

The industry says it is renewable because trees grow back while fossil fuels do not. Scientists say that forests take decades, even centuries, to regenerate, and that burning wood produces more emissions than coal.

“We need to see it for what it is: It is a money-making machine for a few people based on subsidies in the U.K. at the expense of British Columbia,” said Simpson.

The wood pellet industry has been endorsed by Horgan, who calls it a “win-win” for the economy and the environment. B.C. Forests Minister Katrine Conroy has promoted the expansion of the sector into Asia.

Concerns about the industry and its relationship with those who oversee it were exacerbated earlier this year, when the province’s longtime chief forester, Diane Nicholls, was hired by Drax as a vice-president.

“Whenever a bureaucrat jumps ship lockstep to an industry that that bureaucrat has made decisions about supporting, I think a polite term is messy,” said Simpson. “I think it begs an investigation.”

Horgan declined an interview with The Fifth Estate. In a statement, Conroy said Nichols was “instrumental in ushering in a new era of forest management planning” and the wood pellet industry helps reduce waste in the forest.

The wood pellet industry says it uses sawmill residue and what it calls “harvest residuals,” the tops of trees and branches left in the forest after logging.

The province exported $174 million worth of wood pellets in 2012, according to Statistics Canada data, mostly to Britain. That figure more than doubled to $378 million last year, or 2.4 million tonnes, with Japan now closing in on the U.K. as a recipient.

Drax gets its pellets from forests around the world, including the United States, Europe and South America. The company has plans to almost double pellet production by 2030, from five million tonnes globally to eight million tonnes.

Drax’s plans to expand have many observers in B.C. wondering where that increased supply will come from, and what it will mean for the province’s forests.

Drax operates in areas that include ‘old growth forests’

The wood pellet industry has already been facing a barrage of criticism on both sides of the Atlantic over its green promises, both for what is happening in the forest and for the carbon emissions produced by burning the pellets.

Michelle Connolly, a director with the Prince George, B.C.-based group Conservation North, has uncovered data showing that pellet companies not only depend on the logging of forests, but they are also getting licences to log themselves.

“The wood pellet industry in B.C. is set to expand in a big way,” said Connolly. “And the only way they can do it is if the B.C. government continues to allow the logging of primary forests for this purpose. And this has to stop.”

Conservation North teamed up with Ben Parfitt, a Victoria-based policy analyst for the Canadian Centre for Policy Alternatives (CCPA). He scoured the Harvest Billing System, a publicly available provincial database, and discovered Pinnacle Resources, which was purchased by Drax in 2021, obtained numerous logging licences.

“Drax and the government are consistently telling a story that says this industry is fuelled on waste,” said Parfitt. “I think it is extremely deceptive … We never hear them talking about the fact that hundreds of thousands of whole logs are ending up in pellet facilities every year.”

In the fine print of their March 2022 annual report, Drax acknowledges it is now “operating in regions that include old growth forests” in B.C. The report states that Drax was complying with “interim” restrictions the provincial government had placed on some of those old growth forests, pending a review.

Joe Aquino, Drax’s director of sustainability, told The Fifth Estate’s Lyndsay Duncombe that the company only uses lower quality trees from logging operations that otherwise “would have no other purpose.” Higher quality logs are used by sawmills or other manufacturers, according to Drax.

During a tour of the company’s Meadowbank facility south of Prince George, Aquino said 80 per cent of the plant’s pellets come from sawmill waste. The other 20 per cent comes from forest materials, including “roundwood” or what he called “biologs.”

Central to Drax’s green argument is that it uses sawmill residue and also what it calls “waste” left behind in the clearcut forest — including tops of trees and branches — known as slash piles.

Common logging practice is to burn those slash piles, partly to prevent wildfires from spreading in the dead debris.

“We’re using material that would get burnt anyways,” Aquino told The Fifth Estate.

In B.C., the practice of burning slash piles has itself been widely criticized as a significant source of the province’s carbon emissions. The Horgan government once promised to tax logging companies that created and burned slash piles. Now, it is a booster of the industry that promises to burn that wood overseas, far from British Columbia.

In England, the carbon coming out of the Drax smokestack is making headlines and fuelling anger.

“It’s increasing carbon emissions in the atmosphere in the short and medium term and it’s being subsidized to do so,” said Duncan Brack, a policy adviser with the London think-tank Chatham House. He advised the U.K. government on renewable energy between 2010 and 2012.

More than 50 members of Parliament signed a letter in December 2021 demanding an end to wood pellet subsidies, calling the burning of trees for energy a “scandal.” In 2021, Drax received two million pounds a day in subsidies from the U.K. government — more than five billion pounds to date, or $7 billion Cdn.

More than 500 scientists and economists also wrote a letter demanding an end to those subsidies, calling burning wood a “false solution” to the climate crisis, and saying “trees are more valuable alive than dead, both for climate and for biodiversity.” Drax was recently dropped from the S&P’s green energy index.

“Now that we understand so much more, we can’t any longer think ‘Oh well, that means [burning wood pellets is] better than coal … better than gas.’ The reality is that we know it’s not,” he said.

“If you burn wood in the presence of oxygen, it generates more carbon dioxide per unit of energy generated than if you burn almost all types of coal.”

Drax is noticing the opposition. In a report to shareholders in 2021, the company warned of a “risk” that “detractors” might “influence” politicians, leading to “reduced support” for the industry. And in a separate report, it outlines a strategy to counter that by “maintaining strong relationships” with government officials, including in Canada.

Adam Olsen, a Green Party member of the B.C. legislature and his party’s forestry critic, said the Horgan government’s support of the wood pellet sector is part of a larger crisis within the province’s forest management.

“This government, this institution in British Columbia, is entirely captured by industry.”

Olsen points to the recent departure of Nicholls, the province’s top forestry official whose forest management strategy had included efforts to expand the pellet industry. Two years ago, she took part in a promotional video for the Wood Pellet Association, and in 2019 she was part of a trade mission to Japan.

This past spring, Nicholls left her post to join Drax as its vice-president of sustainability for North America. The company did not make Nicholls available for an interview.

[The pellet industry] could be a vacuum for all our remaining primary forests. And that’s what became our biggest fear.– Michelle Connolly, Conservation North

While the logging industry overall has declined in B.C. in the last two decades, losing half of what was once almost 100,000 jobs, wood pellet production has ramped up.

Thirteen pellet mills now operate across the province. Drax has ownership stakes in eight of them.

Detractors say it’s low-value production that doesn’t put the wood to its best possible use and provides little economic stimulus. Using data from two labour unions, the CCPA’s Parfitt estimated that the pellet mills directly employed about 300 people in 2020.

On the other hand, once those mills are built and operating, Parfitt said it’s not easy for the government to ask them to shut down.

“Once you create a beast that requires a massive amount of wood to feed it, they’re going to get that wood, and they’re going to get it in the cheapest way possible,” Parfitt told The Fifth Estate. “And if that means whole logs for Drax, then that is exactly what Drax is going to use.”

Connolly, the forest ecologist and conservation campaigner, says the pellet industry “could be a vacuum for all our remaining primary forests.”

“And that’s what became our biggest fear,” she said. “The claims that these companies are making that they’re green and sustainable, this really turns that into a massive lie.”

In the heart of one of B.C.’s most forest-dependent regions, Simpson said he understands the allure of potential pellet industry investment for hard-hit logging towns. But he said there’s better uses for the province’s timber, whether it’s bioplastics or engineered wood products like fibreboard, and it just takes creative thinking and government leadership.

“Pull the subsidies, stop the silly math of disappearing the greenhouse-gas emissions today from this. It becomes self-evident that it’s not an industry that we should be supporting.”

Watch The Fifth Estate Thursday at 9 p.m. on CBC TV.

If you have any tips about this story please call Harvey Cashore at 416-526-4704, send an email to Harvey.Cashore@cbc.ca or a DM on Twitter @HarveyCashore