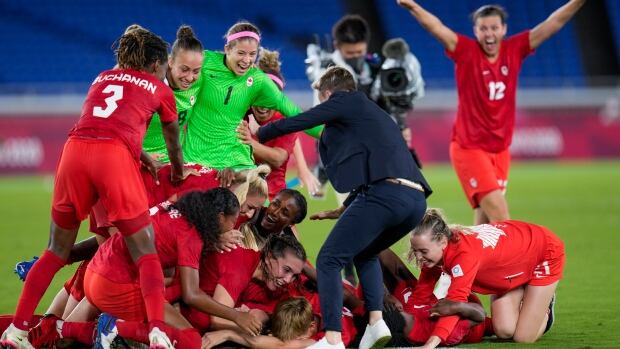 
The Canadian women’s soccer team conquered the Olympics last summer in Tokyo, reaching the medal podium for a third consecutive time. Now it has its sights set on winning on the sport’s biggest stage for the first time in its history.

Saturday’s draw in Auckland will determine Canada’s opening-round opponents for the 2023 FIFA World Cup, which runs from July 20 to Aug. 20 in Australia and New Zealand. Canada qualified for the World Cup by reaching the final of the CONCACAF W Championship staged in Mexico in July, losing 1-0 to the United States after posting shutout wins in its previous four matches in the competition.

Since then, the Olympic champions have won four friendlies against lower-ranked nations that will be competing at next year’s World Cup, including a pair of victories against co-hosts Australia in September.

A rash of injuries left Canada undermanned and coach Bev Priestman scrambling her lineup for two games earlier this month. Among those missing from October’s training camp were iconic captain Christine Sinclair and fullback Ashley Lawrence. But the plethora of absentees barely slowed down the Canadians, who mowed down Argentina 2-0 and followed that up with a 4-0 defeat of Morocco in southern Spain.

These comprehensive performances showed that the team’s depth is one of its greatest strengths. Still, the Reds would be well advised to arrange friendlies against stronger opponents going forward in the buildup to the World Cup, according to Canada Soccer Hall of Famer Amy Walsh, who earned 102 caps for the Canadian women’s team from 1997 to 2009

“Canada, while hampered by injuries to team mainstays, is using every opportunity to evolve and grow,” Walsh said. “Two key victories and comprehensive performances down under against World Cup hosts Australia were an important step on the journey to next summer’s World Cup, and recent victories over Argentina and Morocco provided fringe players the opportunity to contribute and get meaningful minutes.

“However, despite players such as Évelyne Viens, Cloé Lacasse and Jade Rose staking their claim to be a part of Priestman’s World Cup roster, Canada needs to be tested against [higher-ranked] opponents such as Sweden and France in order to truly gauge their progress.”

The 32 World Cup teams have been split up into four pots based on the latest FIFA world rankings released on Oct. 13. Saturday’s draw will divide the 32 nations into eight first-round groups at the World Cup.

Cameroon plays Thailand in the first game of the Group A playoffs with the winner advancing to take on Portugal four days later. The winner of that contest qualifies for the World Cup. In Group B, Senegal takes on Haiti, with Chile awaiting the winner. Group C sees Chinese Taipei taking on Paraguay and Papua New Guinea facing Panama, with the winners moving on to the final for the right to play for a World Cup berth.

Here are the four pots (world rankings in parentheses) for the draw:

The draw will start with each team from Pot 1 being drawn into one of the eight groups: Group A-H. As co-hosts, New Zealand automatically goes into Group A and Australia is in Group B.

Once Pot 1 has been drawn, they’ll move onto Pot 2, then Pot 3 and finish with Pot 4. After each team is selected, a second draw will be held to determine the position for each nation within the group. Pot 1 teams are automatically assigned position 1 in each group — so, for instance, New Zealand is A1 and Australia is B1. The positions are important because they determine in what order the teams in each group will face each other.

It’s also important to note that countries from the same confederation or geographical region cannot be drawn into the same group. So, for example, Brazil (from Pot 2) and Argentina (from Pot 3) can’t be in the same group.

However, this rule doesn’t apply to Europe. As there are 11 European nations (and possibly 12 if Portugal wins its playoff), each group will have at least one but no more than two teams from Europe. Thus, three (or four) out of the eight groups will have two European teams. Also, because the winners of the playoffs haven’t yet been determined, there is a slight chance there might be non-European teams from the same confederation that end up in the same group.

The geographical restrictions also mean that Canada (in Pot 2) can’t be in the same group as fellow CONCACAF nations the U.S. (from Pot 1), and Costa Rica and Jamaica (from Pot 3). As a result, Canada will end up being drawn against one of Australia, New Zealand, Sweden, Germany, England, France or Spain from Pot 1.

At some point, Canada will need to beat a top-ranked nation if it’s going to win the World Cup. But avoiding one of those teams in the group stage could pave the way for the Canadians to win their group and set them up against a weaker second-place opponent in the next round.

“I love Canada’s chances against top opponents, but I’m truly rooting for them to be drawn with one of the co-hosts because this Canadian team has traditionally struggled in the World Cup,” Walsh said. “I’d like them to build confidence against weaker sides, get out of the group comfortably as the top team and face a [second-place team] in the round of 16. Canada’s veteran core knows how to navigate the rigours of tournament play and can pull from their Olympic gold medal experience.”