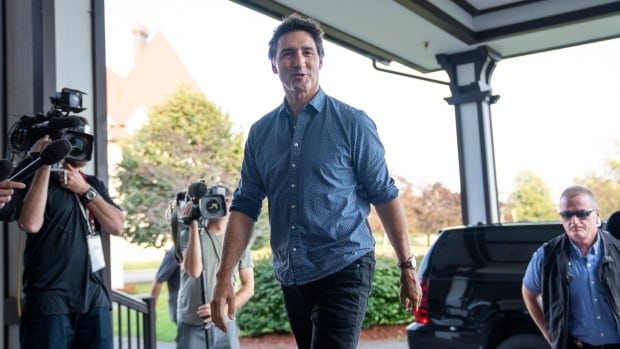 With Poilievre’s victory, some Liberal MPs hope party will pivot to the centre


Some Liberal MPs say the party needs to refocus as it prepares to go head-to-head against a new brand of Conservatives — including being “less woke,” according to Radio-Canada.

A handful of MPs spoke to the French-language arm of CBC — most on the condition that they not be named — as the party gathers for a caucus meeting in the coastal resort town of Saint Andrews, N.B.

The meeting is meant to underline the party’s priorities ahead of the fall sitting, which will see a new face leading His Majesty’s Loyal Opposition: Pierre Poilievre.

With his firebrand style, Poilievre has promised to fire Bank of Canada Governor Tiff Macklem, accusing him of failing to rein in inflation, railed against COVID-19 restrictions and the federal government’s vaccine mandate for travellers and public servants, and vowed to take on the elites.

With a new Conservative leader making inflation a central theme, some Liberals said they believe that economic issues, such as the cost of living and labour shortages, must be brought back to the heart of government priorities.

“We need to reframe the message. We need to have both hands on the wheel when it comes to the economy. We dropped the ball on this,” said one MP, who spoke on the condition they not be named.

Another said the party needs to be better at showing it’s listening to Canadians and their concerns.

“You have to go back to the basics, to a more direct link with the people,” they said.

Within the Liberal ranks, some said they would like to see the party adopt more centrist positions to counter Poilievre.

“We must return to a federal centre, centre-right party,” said another MP, also on the condition they not be identified. “We need a government that is down to earth and less woke.”

Earlier this year, the Liberals struck a deal heading in the other direction. The party has agreed to launch a new dental care program for middle- and low-income Canadians and advance a number of other NDP priorities in exchange for New Democrats propping up the federal government until 2025.

Opinions on the deal were divided at caucus in New Brunswick.

“I am very comfortable with the alliance with the NDP for the stability of the government,” said Alexandra Mendès, MP for Brossard-Saint-Lambert.

“Sometimes, we are so preoccupied with petty politics that we forget big politics.”

Several Liberal sources said they believe that the delay in issuing passports was particularly damaging to Liberal voters, including many newcomers who were waiting for their travel documents to visit relatives abroad.

“We had a difficult summer and it’s not over,” said Mendès. “After two years of confinement, what were we expecting?”

Behind the scenes, some elected Liberals whispered that the minister responsible for the file, Karina Gould, was not up to it.

“It hurt us. It could have been avoided,” said one MP, who didn’t want to be named.