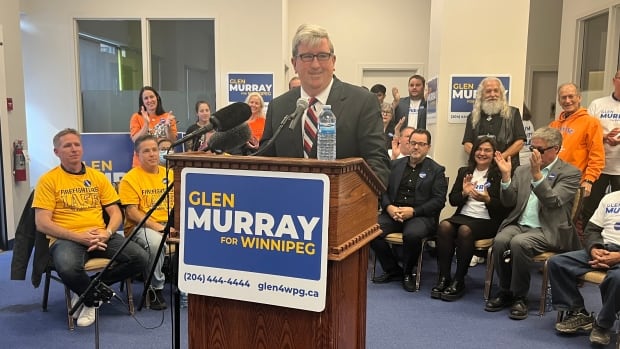 
Winnipeg mayoral candidate Glen Murray denies allegations he physically harassed a former employee of the Pembina Institute during his one-year tenure as head of the environmental organization — and that employee is standing by his claims.

The allegations were first reported earlier Thursday in a CBC News investigation into the 370 days Murray spent in 2017-18 in what he called his “dream job” as executive director of the Calgary-based clean energy think-tank.

The investigation also revealed allegations Murray used sexual innuendo in the workplace and drank to excess at some organization functions before being forced out following complaints about his management.

Duncan Kenyon, who served as the Pembina Institute’s oil and gas director and as its Alberta director, alleged Murray rubbed up against him, pelvis to buttocks, during a company social function in Banff, Alta., in March 2018.

Kenyon said he’s not surprised his former boss would deny his allegations because, while he told his supervisor and several colleagues about the alleged incident, there was no documentation of what Kenyon says happened.

He also questioned whether Murray would know what happened that night, given Murray’s alleged level of intoxication at the time.

On Thursday afternoon, Murray showed up a half hour late to a media availability he called to address the allegations. He arrived to a standing ovation and chanting from supporters gathered inside his campaign headquarters.

Murray said since being approached with questions about his time at the Pembina Institute, he’s been “going over in my mind every interaction, every conversation and every opportunity where something could have happened.”

“I’m not perfect. Who is?” Murray said. “But I am certain the reported sexual harassment from today is not true.”

Murray said while his time at the Pembina Institute was a time of ambition and hard work, it was also a time of great change in his personal life.

“And it is clear that I allowed that pressure to spill over into my work life. I am sorry for this and I take responsibility,” he said.

Glen Murray apologized to the people he worked with at the Pembina Institute, but denied he sexually harassed anyone there, after several ex-staffers spoke out in a CBC story about his time at the Alberta environmental think-tank.

Murray said when it became clear his leadership style wasn’t a good fit for the culture of the organization, he and the Pembina Institute’s leadership team together “came to the realization that parting was the best way forward.”

Documentation obtained by CBC News shows Murray was presented with a termination notice and was given the option to resign instead, which he did on Sept. 9, 2018.

Murray did not take questions from reporters following his remarks.

The CBC News investigation into Murray’s time at the Pembina Institute also prompted several of his campaign rivals to call on him to withdraw from the race.

“I would like to see all people running for mayor, for the sake of the city, to come out and ask Glen to withdraw,” Kevin Klein said.

“I think that that’s the appropriate thing to do here. They’re serious, serious allegations.”

Rana Bokhari later followed Klein’s lead, saying Murray needs to “sincerely apologize to the people he has wronged” and bow out of the race.

“How many passes do we give him? Is this who we want to represent Winnipeg?” Bokhari wrote in an emailed statement.

Scott Gillingham said what Murray and his campaign do now is up to them. Gillingham also said he would worry about how Murray might treat city staff as mayor, given the allegations about his management at the Pembina Institute.

“There’s a pattern that seems to follow him from city to city to city. The article presents a picture of chaos and instability,” Gillingham said.

Shaun Loney called the allegations against Murray concerning, but stopped short of asking him to withdraw — although Loney said he thinks the details revealed about the front-runner may improve his own chances in the race.

“When you’re running for office, you bring your past with you. And I’m bringing my past here with me today,” Loney said.

“For me, I’m just glad that I’ve conducted myself in such a fashion that my co-workers would stand here with me today.”

Winnipeg mayoral candidate Glen Murray was forced to leave his “dream job” as the head of a clean energy think-tank after one year, following complaints about his management, according to former staff and communications obtained by CBC News.