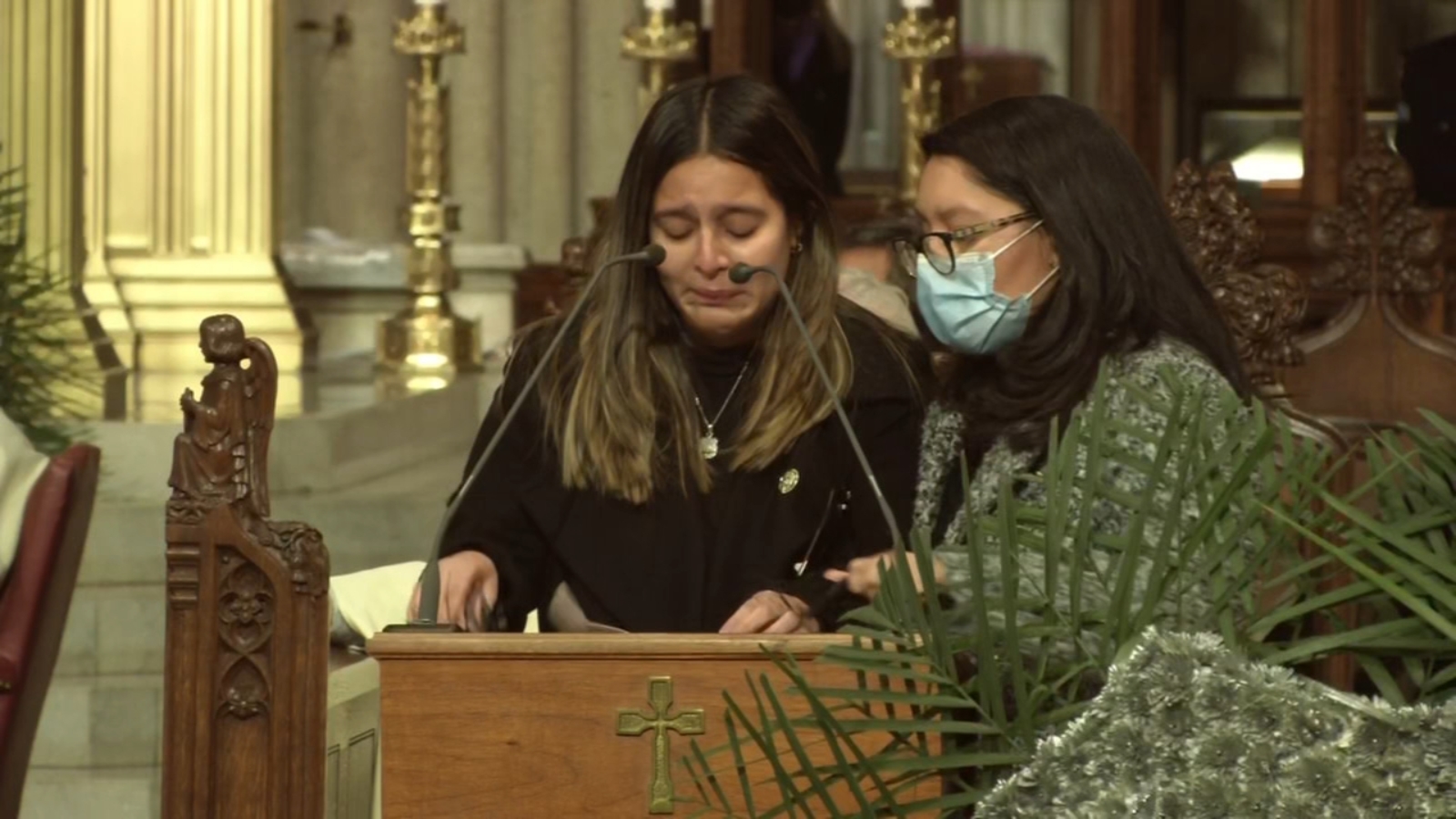 NEW YORK CITY (WABC) — It was an emotional funeral service for NYPD Detective Jason Rivera who was laid to rest after a shooting in Harlem last week claimed both his life and his partner’s.

There were seven eulogies, all impactful, but notably heart-wrenching was the one by his 22-year-old widow, Dominique Luzuriaga.

After tearing up and breaking down into tears at the lectern, Luzuriaga said, “I would say good morning to you all, but in fact, it’s the worst morning ever.”

Wearing a silver necklace with a charm of her husband’s badge, Dominique recounted in heartbreaking detail the fight she had with her husband the day he died.

“This Friday was different. We had an argument. This Friday we were arguing because I didn’t want you to use your job phone while we were together. You were so mad,” she said, recounting the minor spat that turned out to be the last time they ever spoke.

“We left your apartment, and because I didn’t want to continue to argue, I ordered an Uber. You asked me, if ‘Are you sure you don’t want me to take you home? It might be the last ride I give you.’ I said, no. And that was probably the biggest mistake I ever made.”

Then she recounted in detail, just what it is like to be the wife of an officer and receive the call no one ever wants to get.

“Later that day I received the call I wish none of you that are sitting here with me will ever receive. I had gotten a notification from the Citizen App, which was my central. And I saw two police officers were shot in Harlem. I immediately texted you and asked you, ‘Are you
OK. Please tell me you are OK. I know you are mad right now, but just text me you are OK. Just tell me you are busy.’ I get no response. We used to share locations on Find my iPhone. And when I saw yours, you were at Harlem Hospital. I thought maybe you were sitting on a perp. But still, nothing. I called and then called again and then called one more time. And this time I felt something wasn’t right.”

It was then she learned the terrible news, that her husband was one of the shot officers.

“And then I get a call asking if I am Jason’s wife, and had to rush to the hospital. Walking up those steps, seeing everybody staring at me, was the scariest moment I’ve experienced. Nobody was telling me anything. Dozens of people were surrounding me, and yet I felt alone. I couldn’t believe you left me. Seeing you in a hospital bed, wrapped up in sheets, not hearing when I was talking to you, broke me. I asked why. I said to you, ‘Wake up baby, I’m here.’ The little bit of hope I had that you would come back to life just to say goodbye or say I love you one more time had left. I was lost. I’m still lost. Today I’m still in this nightmare that I wish I never had, full of rage and anger, hurt, sad, and torn. Although I gained thousands of blue brothers and sisters, I’m the loneliest without you,” she said.

Then, directing her emotions at the new Manhattan District Attorney Alvin Bragg, she said, “The system continues to fail us. We are not safe anymore, not even members of service. I know you were tired of these laws, especially from ones from the new DA. I hope he is watching you speak through me right now. I’m sure all of our blue family is tired too, but I promise your death won’t be in vain. We’ll take the watch from here.”

Rivera was posthumously promoted to detective first class during Friday’s funeral service by the police commissioner.

Officer Mora’s viewing and funeral will take place at St. Patrick’s next Tuesday and Wednesday.