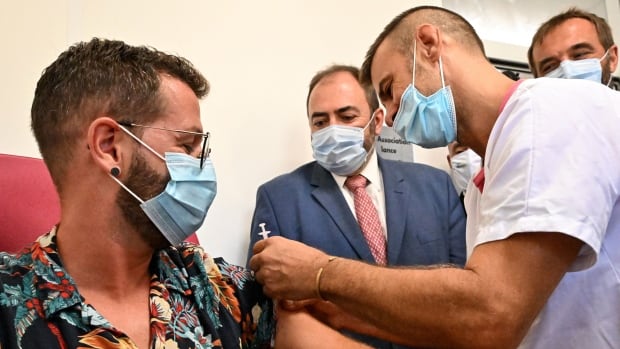 Why wiping out monkeypox could be impossible, with more outbreaks expected in the years ahead


Monkeypox cases surged in countries around the world throughout the spring and summer, but there’s hope this unprecedented global outbreak may be finally winding down.

Health officials in several regions are even optimistic that this virus — which has spread to more than 100 countries, causing over 60,000 infections this year alone — could be eliminated within certain borders.

“Our goal is to eradicate; that’s what we’re working toward,” said Dr. Demetre Daskalakis, the deputy co-ordinator of the U.S. government’s monkeypox response team, in the New York Times this week. “The prediction is, we’re going to get very close.”

In August, officials elsewhere expressed similar hopes — that this virus could be contained in Canada, even eliminated in Europe.

But other scientists warn monkeypox will remain a global threat, with future outbreaks a near certainty. And as a growing number of human hosts offer the virus more chances to multiply and mutate, there’s a chance it could evolve in ways that might make it more transmissible and tougher to tackle in the years ahead.

“Just because a disease like monkeypox appears to be controllable does not mean it will stay controllable,” wrote six American and Swiss scientists, in a letter published this week in The Lancet scientific journal.

With that message came a warning: “Waiting until the number of cases is high would give monkeypox virus — or any emerging pathogen — the opportunity to adapt substantially to humans.”

The latest World Health Organization (WHO) situation report on monkeypox, released on Wednesday, offers mixed signals on how the current global outbreak is progressing.

Overall, there’s been a downward trend in new infections, with the number of weekly new global cases going down by 22 per cent in mid-September, compared to the week prior, and largely fuelled by drops in both Europe and the Americas.

The outbreak has also stayed primarily within sexual networks — with sexual activity now considered a main driver of transmission — and is still largely affecting men who have sex with men, with more than 97 per cent of global cases to date among males.

In a Thursday conversation with CBC News, Dr. Rosamund Lewis, the WHO’s technical lead for monkeypox, said it’s clear the global outbreak has peaked in certain areas, and she attributed that success to various public health measures, engagement with affected communities and vaccination campaigns.

But the virus is still popping up in new countries — the latest being Guam, Ukraine, and Bahrain — while nearly two dozen nations have reported a rise in new weekly infections.

“It is a mix of good news and not-so-good news,” Lewis said.

What’s not fully captured by WHO surveillance reporting is the extent to which this virus is circulating within parts of Africa, where monkeypox has long been endemic. That’s because cases remain underreported given the limited access to medical care in rural areas, said virologist Oyewale Tomori, a former president of the Nigerian Academy of Science.

He also stressed there’s long been a dearth of research into the animal reservoirs of this virus, and scientists remain in the dark on the range of species capable of carrying it. (Monkeys, as the virus’s name implies, can be infected; so can various rodents, prairie dogs, squirrels, shrews and dogs.)

Tomori is among those who expect there will be ongoing transmission around the world, even as this year’s explosion of cases slows down. He warned that in countries like Nigeria and the Democratic Republic of the Congo, interaction with animals — through activities like hunting — will continue to give the virus opportunities to pass back and forth between species, while global travel allows it to easily spread beyond Africa’s borders.

“As outbreaks wane over time, and hopefully they will in most locations, there will still be the possibility of importation of cases through travel from anywhere in the world,” she said.

Against that backdrop, University of Manitoba microbiologist Jason Kindrachuk said there’s a high chance of future global outbreaks. And if this year’s high case counts fizzle out in hot spots like Europe and the Americas, then it’s time to “pour the resources into endemic areas where we know there is a massive amount of circulation,” he said.

As it stands, no country in Africa has access to the monkeypox vaccines that are in high demand elsewhere. Kindrachuk, a Canada Research Chair of emerging viruses who has studied monkeypox extensively, said broader vaccination programs are essential, as is research into household transmission and animal reservoirs to understand how an outbreak starts.

“The alarm bells have been ringing for a long period of time,” he said. “And we’ve known there were these major knowledge gaps.”

A key concern among scientists for the future is that an ongoing outbreak on a global level could provide this virus with opportunities to evolve and better infect humans.

“The million-dollar question on all our minds right now: What is the future of monkeypox going to look like?” Kindrachuk said.

A preprint study from a German research team, which has not yet been peer-reviewed but was shared online in July, identified various genetic changes to the virus, which now appears capable of “sustained human-to-human transmission.”

“Among the most pressing issues in surveillance is the identification of potential markers of human adaptation,” the researchers wrote, noting that a lack of data from infections that occurred before this global outbreak does add a “major challenge.”

The team warned the monkeypox virus that infects humans in the near future might not resemble the pathogen scientists “have known for the last 64 years.”

Sorting fact from fiction about how monkeypox spreads

The World Health Organization says monkeypox is spreading rapidly with no signs of slowing down, but so is misinformation about the virus. Health experts break down how it’s spread and where you’re unlikely to catch it.

Tomori agreed that as this virus continues infecting humans, it will learn to adapt over time. But he stressed that won’t necessarily be a rapid process, since DNA-based viruses like monkeypox mutate more slowly than RNA-based viruses like SARS-CoV-2, the pathogen that causes COVID-19.

“The luck we have is that this virus does not mutate like COVID,” he said.

In their joint letter in The Lancet this week, several scientists said that monkeypox has long been known as an infection with a reproductive number — the expected number of cases directly generated by one infection in a susceptible population — of less than one. In other words, it’s not a highly transmissible virus.

That reproductive number is now likely higher, meaning more people are infected each time, which could be the result either of evolution within humans or other species.

“Regardless,” the scientists wrote, “now is the time — probably past the time — to put resources into controlling outbreaks before they grow larger and have time to evolve further.”

Kindrachuk stressed that given the limited research and surveillance on monkeypox prior to the surge of cases in 2022, it’s hard to predict exactly how this virus will mutate and spread in the future.

“We can look back historically and say we haven’t seen rampant evolution for monkeypox … but that doesn’t mean that it can’t, if it’s given the opportunity.”