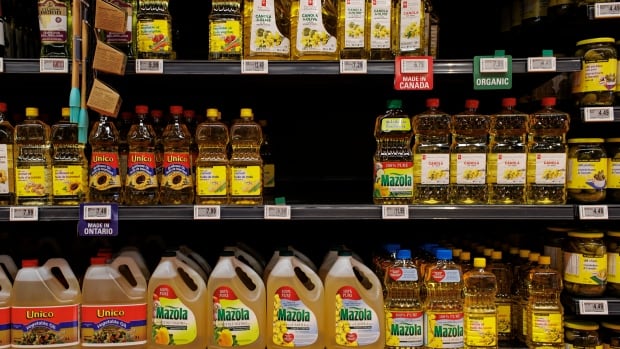 
A stroll through a grocery store can be a stressful experience these days, given the hike in the price of many foods.

And among the many items that have gotten more expensive in the past year, vegetable oil tops the list. Between August 2021 and August 2022, a three-litre container of vegetable oil increased from $8.45 to $12.01, a difference of $3.56, according to the most recent Statistics Canada retail data, compiled by CBC News.

Johnny Esposito, the owner of Esposito’s, a small grocery chain in Montreal, said he’s seen the price of oil climb dramatically — and yet shoppers still reluctantly add it to their carts.

“People complain. It’s so expensive, but you need it,” he said in an interview. “Oil is a staple product. It’s like having a car without gas.”

The increase in the price of vegetable oil is the most dramatic example of a more general rise in food prices. Overall, grocery prices increased at a pace of 11.4 per cent in September compared to a year ago, according to Wednesday’s inflation update from Statistics Canada.

That’s the fastest pace of increase in grocery bills since August 1981. It’s also the 10th straight month that food prices have outstripped the overall inflation rate, which dropped to 6.9 per cent in September, down from seven per cent in August.

Loblaw Companies Ltd. — the country’s largest grocery chain — came under fire earlier this week for its pledge to freeze the prices on its house brand, which includes more than 1,500 grocery items (including vegetable oil), until the end of January 2023.

The announcement was panned by critics as a public relations move amid soaring inflation.

A fixture, and a key ingredient

A multitude of factors has pushed up food prices. Statistics Canada attributed the rapid increase in grocery prices to weather conditions, higher prices for fertilizer and natural gas and Russia’s invasion of Ukraine.

“We’ve seen as a result of droughts around the world, but also the Ukrainian-Russian conflict, massive increase in the global price of grains,” said Simon Somogyi, a food professor at the University of Guelph.

Vegetable oil — a blanket term for oil derived from ingredients including palm, sunflowers, soybeans and canola — has been particularly hard hit, said Somogyi.

The effects of such an increase are wide-ranging. Vegetable oil is not only a fixture in home kitchens and restaurants, but also a key ingredient in many processed foods — driving up the price of those items as well.

Meat — including stewing beef, chicken and pork — have also substantially increased in price.

“The production of meat and the processing of meat requires a lot of human effort, movement of stock, fuel costs, labour costs,” Semongyi said.

“Animals, particularly the ones that we consume, have a fair diet of grains as well, and the grain prices have been spiking.”

When it comes to vegetable oil, the increase in prices began two years ago and has climbed almost ever since.

An analysis by the International Food Policy Research Institute, a global research group, noted that supply tightened prior to the Russian invasion of Ukraine due to drought in South America, a typhoon in Malaysia and labour shortages due to restrictions on mobility during the pandemic.

Esposito said the crates of sunflower oil that arrived at his two stores this week cost $28 more than those a week prior — working out to $7 more for a three-litre bottle.

But Semongyi said he expects the price of many staples, including vegetable oil, to stabilize in the coming months.

“We have seen over the last four-to-six months a lowering in vegetable oil prices, due to a slowing of the Ukraine conflict and better global supply, and those decreases typically take some time to be felt as lowered shelf prices, which should be imminent,” he said in a follow-up email.

WATCH | What shoppers have to say about food price increases:

Increases in the price of food are out of control, and on the streets of Toronto on Tuesday, Canadians told CBC News about what they are doing to deal with them.