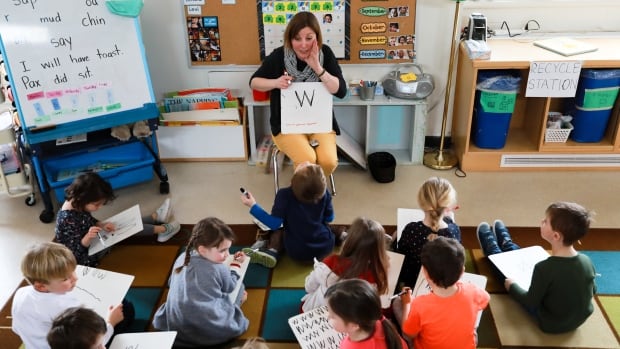 
When Emily Moorhead’s son Aiden was struggling with basic reading in Grade 1 several years ago, the two of them worked out a deal. Every time he got so frustrated that he wanted to scream, he could go outside, run around the house, come back in and try again.

“It gave him a little break and a little time, but he was running way more than he was reading,” she said. “A lot more.”

Those were tough days for Moorhead and her child. During homework sessions, she said the two of them would often be crying — filled with feelings of anger and despair. Aiden could not grasp the basic concepts of reading, unable to recognize even a simple word like “look” from one page to the next. He was showing early signs of dyslexia, a learning disability which makes it difficult to process text.

An elementary school teacher, Moorhead said she was baffled to find she was still hopelessly ill-equipped to help her own son address his reading difficulties.

The Kingston, Ont.-based teacher was one of many who told their stories to the Ontario Human Rights Commission (OHRC) Right to Read Inquiry. Launched in 2019 to examine potential human rights issues that affect students with reading disabilities, it recently released its findings.

The inquiry’s recommendations are non-binding, but it has already spurred Ontario’s government into action.

The inquiry’s report is a scathing indictment of Ontario’s elementary school curriculum, the institutions that train teachers, and the screening system for students with potential disabilities.

At public hearings across the province, the inquiry heard many similar stories.

Parents and educators spoke about being let down by the education system. Children and teenagers with reading disabilities shared stories of the hardships they endured as they struggled to keep up with classmates under Ontario’s current reading curriculum.

WATCH | Parents and students describe their issues with reading education to the Ontario Human Rights Commission’s Right to Read Inquiry:

Speakers address the Ontario Human Rights Commission’s Right to Read Inquiry in London, Ont., on Jan. 29, 2020. The Commission was looking into whether Ontario’s Elementary school curriculum is adequately serving all children, and it filed its report and recommendations on Feb. 28, 2022. 4:15

“The inquiry has found that schools are not using evidence-based approaches to teach early reading, and as a result, students with reading disabilities and other students are failing to learn to read,” DeGuire said.

The inquiry also notes that public schools are relying on a teaching method known as the “three-cueing” approach, where children are taught to draw meaning from context or pictures. According to the report, this approach is outdated and there is not enough emphasis on phonics or “Structural Literacy” education.

As the commission’s senior legal counsel Reema Khawja put it, “The current approaches are rooted in a philosophy that suggests by immersing children in spoken and written language, they’ll discover how to read.”

The report urges a revision of Ontario’s kindergarten language curriculum to require systematic and direct instruction in foundational reading skills. It also calls on teacher education programs to better equip teachers to deliver the critical components of reading instruction.

To those who follow literacy and language education issues, this is just the latest chapter in what is often referred to as The Reading Wars, a series of academic arguments over the best way to teach reading in schools. One side says that basic phonemic awareness is the key to literacy. The other argues that phonemic awareness plays a smaller role, and that cultural context clues are key to deriving meaning from text.

Among those critical of the Right to Read report is Brock University professor Diane Collier, who represents a group of literacy researchers from nine different education faculties across the province. Her group wrote a formal submission to the Right to Read Inquiry midway through the process, saying its approach was too narrow.

“There is no one-size-fits-all for reading,” she told CBC News.

“A highly systematized, step-by-step approach is not necessarily accessible for all students who have all kinds of needs, so it could further marginalize readers.”

Collier says that while phonemic awareness is important, she believes there is a lot more to literacy than just decoding letters, arguing the “three-cueing” method still has a place in our education system. She points to a lack of proof of the power of a phonics-intensive approach.

“We don’t have really any evidence that this works long-term, that this particular kind of approach makes better readers, makes better students and learners.”

There is, however, common ground between those on both sides of the so-called Reading Wars. Collier notes that the OHRC’s inquiry had a tight focus on those with reading disabilities, and her group agrees that it’s important to hear those stories.

“For sure, kids with reading disabilities need more help with phonics and phonemic awareness,” she said.

Reading is a human right

While there is disagreement over the best approach, universal access to effective reading education became a constitutional right in Canada in 2012, when the Supreme Court of Canada ruled in the case of Moore vs. British Columbia.

It was the culmination of a 15-year fight by the family of Jeffrey Moore, a severely dyslexic student who was not getting adequate support within B.C.’s public system. The Supreme Court ruled unanimously, saying students with learning disabilities have every right to receive an education that gives them an opportunity to develop their full potential.

CBC News report on the 2012 Waterman vs. B.C. decision by the Supreme Court of Canada

On Nov. 9, 2012, the Supreme Court of Canada ruled unanimously that children with reading disabilities have the right to receive publicly funded special reading instruction. The case of Moore vs. British Columbia took 15 years to make its way through the courts. 2:02

The Ontario Human Rights Commission’s new report notes that this right is not being realized equally across the province.

Immediately following the release of the report, the Ministry of Education in Ontario announced sweeping changes.

“Our government is committed to creating a highly literate workforce that gives young people the self-confidence, and essential life and jobs skills they need to succeed,” Minister of Education Stephen Lecce said in a statement.

“Ontario is overhauling the language curriculum with a focus on phonics, investing in new reading supports for students, and hiring more specialized staff to help put our province and country on a strong footing to compete globally and thrive economically.”

The Right to Read Inquiry’s report was also concerned by the varied screening methods and early-intervention supports used across jurisdictions, even within school boards, for students with specialized needs. The report calls for consistent, standardized screening and assessments, so that children with reading issues can be found early and given assistance.

The provincial government’s response states that as an immediate first step, Ontario is making a $25-million investment in evidence-based reading intervention programs and professional assessments to enable school boards to immediately begin meeting the needs of struggling readers. Funding is being made available for this school year and will carry through into the 2022-2023 year.

Emily Moorhead didn’t wait for big curriculum changes from the Ministry of Education. As she told the Right to Read Inquiry in 2020, she learned many lessons from her son’s experience with a reading disability about a decade ago, and so she initiated elements of structured, phonics-based learning in her kindergarten classroom.

When Aiden wasn’t getting the help he needed at school, she enrolled him in an intensive tutoring program at a private reading school in Kingston. Thanks to a phonics-based, one-on-one approach, she says Aiden began to understand texts.

“My son, from the very first day at The Reading Clinic, had a change in the way he felt about reading,” Moorhead told a 2020 Right to Read public hearing.

Impressed by her son’s progress, she enrolled in a summer course in Structural Literacy instruction. Since then, while still adhering to the play-based curriculum mandated in Ontario, she has also been giving her students an early education in reading, in what might be seen as a preview of the changes recommended in the OHRC’s inquiry report.

In her classroom at Winston Churchill Public School, Moorhead now spends 15 minutes each morning decoding the sounds that different letters make and teaching rules that apply when putting them together to spell a word.

“Some of those kids are still three, and they’re already figuring out these sounds and putting the pieces together,” Moorhead said.

Other teachers in her board have also taken an interest, educating themselves on their own time through online courses on Structural Literacy. With the full support of the current principal, intensive phonics are now part of what’s taught in many classrooms at her school.

Moorhead presents reading instruction to the children as a “code” that needs deciphering. She teaches the sounds of each letter one at a time, and later begins putting them together so the children can form sounds, and ultimately words.

“It was miraculous that the changes in the kids at school were overwhelming right off the hop,” said Moorhead, who added that she has found this teaching technique benefits those with disabilities as well as those without. “They were keen. They were excited.”

That excitement has been noticed by parents, including Danna Hull, whose children Britton and Clara both had Moorhead in kindergarten. Hull says both kids found “code time” to be a highlight of their day, and they brought their excitement home.

“A few times they’d come home with little Ziploc baggies, with the little letters written on paper and instructions to the parents,” Hull told CBC News. “We’d get to choose three letters and put them in an order, and then they’d have to read them. They thought it was amazing — and we thought it was amazing, because this game was teaching them to read.”

During the at-home school days early in the pandemic, Debra Hamer, a mother whose seven-year-old son Max was in Moorhead’s kindergarten class, said she noticed that the phonics lessons were the only time he actually sat in front of the screen and paid attention.

“Miss Moorhead would say, ‘It’s code time,’ and he would get into his zone and go get his piece of paper and his pen, and sit in front of her as if he was in class,” Hamer said. “So, even with the pandemic, my kid was reading like he was off to the races.”

However, Brock University’s Collier cautioned there is more to literacy than phonics, and is concerned that more classroom research needs to be done on the idea of Structural Literacy to warrant sweeping curriculum changes.

“Reading has to be contextualized,” she said. “Phonics or sound-word based study is just such a very small fraction of what we think of when we think of both reading and literacy more broadly.”

Watch full episodes of The National on CBC Gem, the CBC’s streaming service.