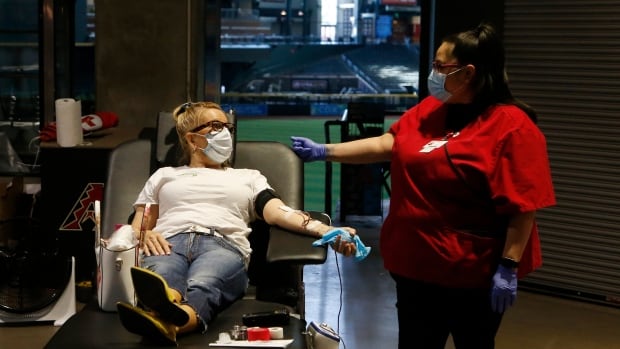 
Some former blood donors in Thunder Bay say they’re frustrated that Canadian Blood Services is appealing for donors while failing to offer clinics in the northwestern Ontario city.

Kathleen Murphy and Jennifer Jones are among northern Ontarians who have responded to donor appeals on the non-profit service’s Facebook page by posting complaints in the comments section.

“It’s almost insulting, because there’s a lot of pressure to be giving something that I can’t give. There’s sort of a guilt trip there that there’s this desperate need, and we need you to give, but they’re not providing the opportunity for us to do so.”

Canadian Blood Services stopped holding mobile donor clinics in Thunder Bay in 2012 and also shut down a plasma centre in the city.

Murphy, who had been a regular plasma donor, said she was disappointed by that move.

‘Healthy veins that aren’t being put to use’

“We have a lot of people who are socially responsible and community oriented who would be happy to give blood,” she said.

“We’ve got lots of healthy veins that aren’t being put to use.”

Jones said she’s frustrated to see Canadian Blood Services purchasing blood products from the United States that are made with American paid-donor plasma when there are willing volunteer donors at home.

The chief supply chain officer and vice-president of donor relations for Canadian Blood Services said the lack of clinics in Thunder Bay is the result of “a geographical constraint.”

The blood products most needed by hospitals nowadays require that blood be processed within 24 hours of collection, Rick Prinzen explained.

The nearest processing centre to Thunder Bay is nearly eight hours away, in Winnipeg.

“If we were to have a four-hour collection event in Thunder Bay, the very first donor, the unit would be sitting in the collection centre for at least four hours, and then you’ve got the eight-hour transit time. … and then you have the production processing time,” Prinzen said.

“So when you stack all of that up, it becomes very, very tight — I’ll admit not impossible, but difficult.”

Canadian Blood Services is considering partnering with private firms that pay for plasma donations to help with a lack of adequate plasma supply.

Pressed for why his agency wouldn’t make the effort if it’s as desperate for donors as its appeals indicate, Prinzen said it is focused on communities where it can achieve the highest number of “bed hours available per 1,000 population.”

“We look at a market and we say, ‘Are we able to collect to the anticipated target or market potential available?'” he said.

“Thunder Bay — I don’t mind being quite candid — was a little bit of a challenge in that regard, in terms of its ability to meet what we thought the market potential had available.”

The cost of putting a blood processing centre in the city would be prohibitive, Prinzen said, even though he acknowledged having a presence in Thunder Bay might help the agency build relationships with Indigenous people and further its aim of increasing the number of Indigenous stem cell donors.

However, Prinzen said, registering as a stem cell donor can be done online and by mail and is a way for people to contribute to what the agency calls “Canada’s lifeline” without visiting a clinic.

Women from around the world descend on Antigonish for leadership lessons