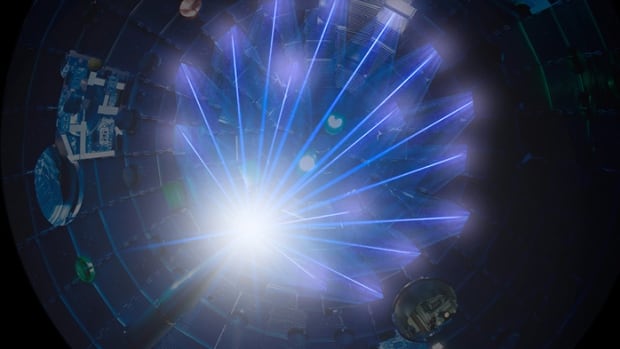 
Many achievements in science are called breakthroughs. The announcement this week that scientists at the National Ignition Facility (NIF) of Lawrence Livermore Laboratory in the U.S. achieved a breakthrough nuclear fusion reaction, literally was one.

It was a major step forward in fusion research. The next step is to keep the reaction going longer.

“Breakthrough” is the term used in fusion science for the point at which the energy produced from a fusion reaction was more than the energy needed to run it. However, the NIF’s technique of using 192 laser beams to implode a tiny nuclear fuel pellet for a fraction of a second, like an enormous flashbulb, is not likely the method that will be used to generate clean energy in the future.

This isn’t surprising, really, as the NIF facility wasn’t designed to test energy generation. Its primary function is to do research related to thermonuclear weapons and materials.

The lab can only generate one of its laser-driven fusion flashes every few days or so. If we want to generate electricity, we need the equivalent of a spotlight that shines constantly which requires a different technology called magnetic confinement using a design known as a tokamak.

Think of a large circular chamber shaped like a hollow doughnut. Around the outside of the chamber are a set of incredibly powerful superconducting electromagnets that create what is referred to as a magnetic bottle, a ring-shaped magnetic field inside the doughnut.

The next ingredient is hydrogen gas — actually deuterium or tritium, which are hydrogen atoms with extra neutrons. This is heated to the point where its electrons are stripped away and it becomes an electrically charged plasma, which is then injected into the magnetic bottle.

The plasma is then further heated to 150 million degrees C until fusion occurs. Because the plasma is confined by the magnetic fields, it doesn’t melt the walls of the chamber.

The concept is to start a fusion reaction then keep it going continuously as a self-sustaining burning plasma so the energy can be used to generate electricity. Burning plasmas have been created in tokamaks such as the Joint European Torus in England. It set a world record in 2021 by creating a fusion reaction that lasted five seconds — but it still took more energy to heat the plasma and drive the fusion reaction than the actual fusion process produced. The fusion fire wouldn’t stay lit without external help.

The next step for fusion research lies in Southern France, where the world’s largest tokamak is currently under construction. The International Thermonuclear Experimental Reactor, or ITER, is expected to go beyond the break-even point and produce 10 times more energy than it takes to run it.

ITER will be a research reactor that is designed to study the nature of plasmas, how to keep them burning for extended periods of time and study the effects of the reaction on materials used in the walls of the chamber to ensure future fusion reactors — ones that will actually be designed to produce electricity — will operate properly.

ITER’s first plasma was scheduled for 2025, but construction and manufacturing delays, as well as the COVID-19 pandemic, have created concern that the deadline will slip.

All the apparatus of lasers and magnetic bottles is necessary because atomic nuclei do not easily fuse together unless they are under extreme conditions. The sun does it through its immense mass that produces extreme pressures and temperatures at its core that force hydrogen nuclei to fuse into helium, giving it the energy to shine brightly. Here on Earth those conditions are extremely difficult to duplicate.

Squeezing a plasma into a confined space and maintaining it at a temperature 10 times hotter than the centre of the sun has been compared to trying to hold onto hot Jell-O with a rubber band.

ITER the leading candidate for a fusion energy system, but it’s not the only one. In the U.S., a tokamak called SPARC, under development, at MIT is expected to achieve the same results on a smaller scale thanks to advances in electromagnet technology. And several private companies have arisen with their own systems and plans, including Vancouver-based General Fusion who plan to contain their fusion reaction in pressurized molten lead.

The ultimate goal is to capture the energy from burning plasmas and turn it into emissions-free electricity without the volume of nuclear waste products that fission reactors produce. Some of the electricity from the reactor will be cycled back to power the electromagnets that contain the plasma so the entire reaction becomes self-sustaining — a miniature star here on Earth.

If ITER or SPARC, or one of the private projects are successful, commercial fusion reactors are hoped to be in operation sometime in the 2030’s. But fusion research timelines have been difficult to keep in the past because the task is so difficult.

Meanwhile, the timeline for disastrous climate change is also drawing close. This does invite the question, will fusion power be ready in time to really make a difference?

The 10 most bizarre golf courses in the world

Revolutionary telescope will soon alter what we know of the universe