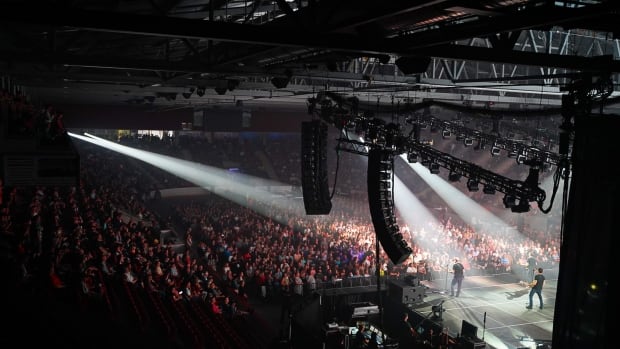 Why Bryan Adams’s P.E.I. concert was a step forward for solar power


When Bryan Adams opened his North American tour on P.E.I. on Aug. 31, people behind the scenes were attempting another first that he didn’t know about.

The concert was being held in Summerside, and the small city’s electrical utility was trying to make the concert the first evening concert in North America to be entirely solar-powered.

BluWave-ai, the company whose software powers Summerside’s smart grid, came up with the idea.

The plan involved adjustments to the grid that required the city’s permission — and Summerside’s director of economic development said the city jumped at the opportunity.

“To showcase our capabilities as a leading North American municipality, we decided to deliver a 100-pert-cent green solar energy concert experience at our arena,” Mike Thususka told CBC News.

The city has a large solar farm adjacent to Credit Union Place, the arena where the concert was being held. Since the show was at night, that meant all systems would have to run off battery power from energy that had been collected during the day.

Devashish Paul, the CEO of BluWave-ai, said this requirement made the opportunity stand out as a potential North American first.

“There are some venues with solar power, but not with battery storage,” he said.

The success of the experiment was by no means a sure thing. There were two key unknowns.

The company could make estimates, but it didn’t really know how much energy it would take to power the sound, lights, and even air conditioning for the huge space.

In the end, Paul said, they were sure the battery would have enough capacity — 276 kW, roughly what it would take to run 3,000 100-watt light bulbs for three hours — to get through the concert.

What’s Mother Nature going to give on that day? Because what Mother Nature gives and Bryan Adams uses kind of has to match up.—Devashish Paul of BluWave-ai

And there was the second concern.

“It was going to be a partially cloudy, partially sunny day, and it was a bit fickle in terms of cloud coverage. So basically we felt like there was a chance that it would all work out, but we didn’t really know.”

As things turned out, it was close, but at the end of the show, there was still a little juice in the battery.

With this test proving the technology works, Paul said BluWave-ai will be looking for other opportunities to use it.

The potential is significant. Paul noted that the halftime show at the NFL’s Super Bowl is run off a diesel generator on the sidelines, because the production company is concerned about how robust the stadium’s electrical systems are.

That’s a much larger scale, but what happened at Adams’s Summerside concert could work for the Super Bowl halftime show as well, said Paul.

“Just charge up these batteries and truck them in, just like you’d truck in diesel, and you can run the Super Bowl halftime show off daytime solar with these batteries,” he said.

Using electric trucks to transport those batteries could make for a 100-per-cent clean show, Paul added.

“We can decarbonize and still run our shows.”