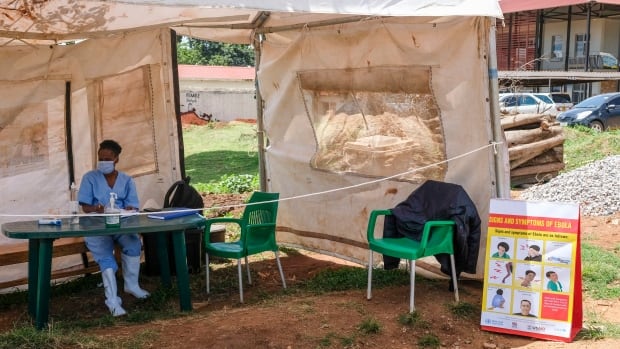 
World Health Organization chief Tedros Adhanom Ghebreyesus said on Wednesday a clinical trial of vaccines to combat the Sudan strain of Ebola could start within weeks as an outbreak of the disease in Uganda reached the capital, stirring alarm.

The East African country declared an outbreak of Ebola on Sept. 20 and said infections were being caused by the Sudan strain. Uganda’s health ministry has confirmed a total of 54 Ebola cases and 19 deaths.

Health minister Jane Ruth Aceng confirmed a first case in the outbreak was detected in the capital Kampala.

“A sample confirmed that he had Ebola,” Aceng told reporters.

A man from central Uganda had travelled to seek treatment at a hospital in the capital, but his condition deteriorated and he died on Oct. 7. A sample was obtained from his body before burial, which tested positive for Ebola, she said.

There have been worries the spread of infection in Uganda could be difficult to control because currently there is no vaccine for the Sudan strain. The epicentre of the infections is a cluster of five districts in central Uganda.

In a virtual address to a meeting of Africa regional health officials in Kampala, Tedros said several vaccines were currently being developed that could deal with the Sudan strain.

Two of those vaccines “could be put in clinical trial in Uganda in the coming weeks pending regulatory and other approvals from the Ugandan government,” he said.

“Our primary focus now is to rapidly control and contain this outbreak to protect neighbouring districts as well as neighbouring countries.”

The Current10:27Scramble to contain Ebola outbreak in Uganda

Uganda is experiencing an Ebola outbreak — a rare variant known as the Sudan strain, which has no vaccine. Robert Keango, the medical coordinator for Doctors Without Borders in Uganda, discusses efforts to contain it.

Tedros did not provide details of the vaccines due for trial such as their names or which firms developed them.

Ebola, a hemorrhagic fever, mainly spreads through contact with the bodily fluids of an infected person. Symptoms of the viral disease include intense weakness, muscle pain, headaches and a sore throat, vomiting, diarrhea and rashes, among others.

Although it has no vaccine, WHO has previously said the Sudan strain is less transmissible and has shown a lower fatality rate in previous outbreaks than Ebola Zaire.