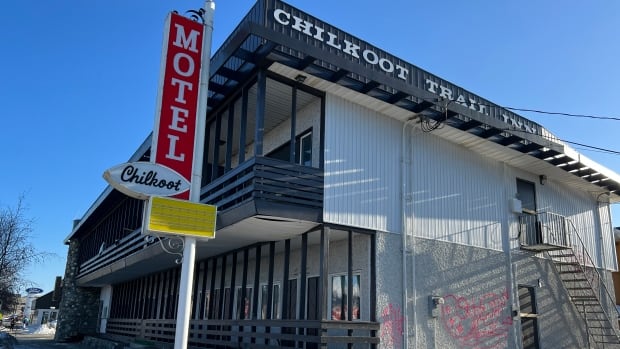 
The owners of Whitehorse’s Chilkoot Trail Inn, a dilapidated downtown motel ordered to close earlier this year by city fire inspectors, want to re-open the facility as housing for vulnerable people.

That’s essentially what it was before it shut down, but now the owners are hoping the government will help pay for expensive repairs, and a local NGO will manage the building as supportive housing.

“We recognize that there’s a need for affordable housing options for the vulnerable population in our city. That’s the bottom line,” said Marc Perreault, a spokeperson for the owners of the Chilkoot Trail Inn.

“The owners are very community-minded and they’re willing to continue providing the asset they have as an option for those clients.”

The 39-unit motel has already been used for years as housing, often by people struggling to find an affordable alternative.

In January, those residents were all given two weeks notice to clear out. A fire months earlier had sparked an investigation by the city’s fire department and the building was found to be unsafe.

There were “significant deficiencies affecting fire and life safety,” the city’s fire chief told CBC in an email.

The non-profit Safe At Home Society then stepped in to help find solutions for the people suddenly left homeless.

Closure ‘meant to be temporary’

Speaking in January, Perreault estimated that the needed repairs would take two to three months and that the owners intended to then allow people back into their old rooms.

“When it was closed, it was temporary. They, you know, meant it to be temporary. That was the initial intent,” Perreault said.

Speaking on Wednesday, Perreault said some initial repair work was done but the building is still boarded up and vacant. In a letter to the territorial government last month he estimated that the needed repair work would cost between $400,000 and $700,000.

“At this time we here in Whitehorse are not in a position to lose 39 units of affordable housing and our goal is to ensure that does not happen,” the letter reads.

It suggests that once repairs are done, the motel owners would seek an agreement with a local NGO to manage the building for a fee.

Perreault told CBC that the motel owners are simply “trying to find ways of coming up with a solution.”

The opposition Yukon Party pressed the government for an answer this week in the territorial legislature.

“What they’re proposing is a unique solution, similar to what we’ve seen with other hotels, for instance, the High Country [Inn],” said Leader Currie Dixon, referring to a former hotel just down the street from the Chilkoot Trail Inn that’s now being converted into supportive housing units.

“I think it’s understandable that a private hotel owner would look at the model used elsewhere in this city and ask if they could be a part of that as well.”

But Ranj Pillai, Yukon’s housing minister, is non-committal, saying “there’s still a lot of unanswered questions around this property [the Chilkoot Trail Inn].”

Pillai also stressed that the former High Country Inn is no longer a hotel business — it was sold to the Safe At Home Society, making the housing project eligible for government funding. The Chilkoot Trail Inn is a different story, he said.

“I would put it this way: if there was a solid plan that was put in front of us, that showed a governance structure and an ownership structure that met the criteria for our programs, we’re always open to having those discussions.”

Kate Mechan, executive director of the Safe At Home Society, says there are also larger discussions to have about the territory’s hotels being used as housing.

“I mean, we have essentially trapped people in cycles of homelessness and in hotels and motels because our market rental rates are now completely unaffordable,” she said.

“Hotel and motels are not permanent housing solutions.”