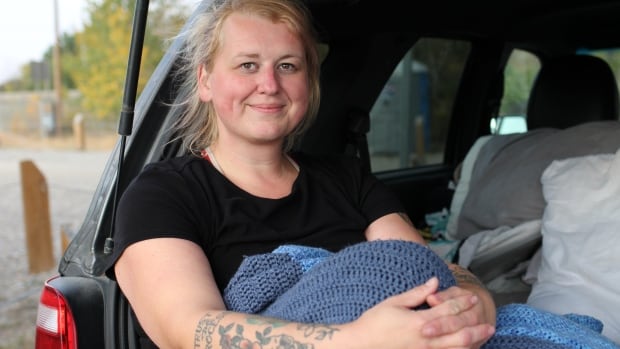 Where to live when you can’t find an affordable rental? For this woman — it’s her SUV


Courtney Dahoy, 34, moved back to Calgary this summer for work, after a short period spent living in Camrose.

So far, she said, the job is going well. But amid Calgary’s tight rental market, the search for a place to live is not.

Nowadays, she said the going rate seems to be $800 or $900 — and sometimes, there’s nothing available at all.

Dahoy is confident she’ll find something sooner or later. But without a better option in front of her, she’s now living out of her SUV.

It’s not a perfect situation, she said, but it’s not that bad. Through a mix of internet research and trial and error, she has found parking lots throughout the city that are friendly to travellers and people living out of their cars.

Plus, she said, she’s not the only one out there.

“It’s almost like a trend these days,” she said.

How common is this?

It’s a difficult trend to put into numbers. Data isn’t tracked about the number of people in Calgary who don’t have a fixed address and are instead couch surfing, sleeping in their cars or finding other temporary arrangements.

But anecdotal evidence suggests their numbers may be growing.

The YWCA told CBC Calgary its outreach team has noticed more victims of domestic violence staying in their vehicles because there aren’t enough affordable rentals.

Chaz Smith, with the street outreach organization BeTheChangeYYC, said he, too, is aware of people in this situation.

And Trystan Taylor, an employee at a Calgary campground, said the number of people trying to live at the campground  — rather than staying there recreationally — has been up about threefold over previous seasons.

University of Calgary social work professor Jeannette Waegemakers Schiff said this isn’t surprising. She said homelessness has risen during the pandemic and been made worse by inflation.

Waegemakers Schiff said it doesn’t need to be this way.

“There has to be the political will to say that housing becomes social responsibility and not just a privilege.”

As for the word “homeless,” Dahoy doesn’t think it describes her. As long as she has her vehicle, she has a roof over her head and protection from the elements.

Work and the search for a rental keeps her busy during the day. Tim Hortons and McDonald’s are frequent haunts, she said, because of the free Wi-Fi.

At night, she stays alert and keeps a sun visor up for privacy and safety. And while most people in the parking lots keep to themselves, she said there’s some comfort in knowing she’s not alone.

“You see the same folks around and they look like they’re decent people,” she said.

Dahoy does worry about the coming winter. Still, she believes in staying positive and, when all else fails, turns to music for inspiration.

“You Won’t Break My Soul — Beyoncé — that song is pretty much repeating in my head if I find myself getting down,” she said.

Tell us your story

CBC Calgary is looking at housing for our next community-driven reporting project. What has been your experience looking for a place? Is there anything you’ve learned?

Add your cell phone number in the box below to join. It’s confidential. Unsubscribe anytime.