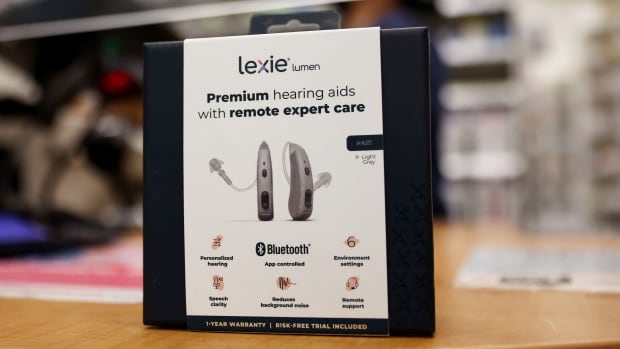 What over-the-counter hearing aids in the U.S. could mean for Canada


Hearing aids just got dramatically cheaper in the U.S., now that major retailers and pharmacies are permitted to sell them over the counter.

The change has many Canadians wondering whether it will happen in this country.

The move to allow Americans to obtain certain hearing aids without a prescription took effect this week, more than five years after the passage of a law directing the U.S. Food and Drug Administration (FDA) to create rules for over-the-counter sales of the devices.

Studies by audiologists estimate that around three million Canadians have some degree of hearing loss that could be improved with hearing aids, yet 80 per cent don’t wear them.

Cost is thought to be a major reason: the most basic hearing aids available in Canada start at around $2,000 a pair. Stigma, difficulties getting hearing aids to work properly and unwillingness to admit to a hearing problem also factor in.

Here’s what you need to know about over-the-counter (OTC) hearing aids.

Why are over-the-counter hearing aids a big deal?

There’s broad consensus that this change will make hearing aids more affordable for millions of Americans who need them.

Until the FDA was ordered to change its rules, hearing aids could only be obtained in the U.S. with a prescription. That required a visit to an audiologist or a specialist physician, with a full-fledged hearing test and medical evaluation. The cost of all those services were rolled into the sticker price of the hearing aids.

Those requirements were unnecessary and served as “red tape and a barrier to more companies selling hearing aids,” said the White House in a statement.

Who could use OTC hearing aids?

OTC hearing aids are intended for adults with “mild to moderate hearing loss,” according to the FDA’s new regulations.

Over-the-counter models would not be suitable for adults with severe hearing loss or for children.

What do they cost?

U.S. retailers began offering hearing aids online and in store on Monday, when the new rules kicked in.

The companies describe these OTC hearing aids as “comparable” to versions that specialty hearing clinics sell for anywhere from $2,000 US to $8,000 US per pair.

That’s also roughly the price range in Canada, where hearing aids are currently only available by prescription. The cost includes all the services of an audiologist, from initial testing through to follow-up adjustments.

In the U.K., hearing aids are provided free by the National Health Service.

What are the pros and cons?

The chief argument in favour of OTC hearing aids is their affordability.

“I see these self-fitting over-the-counter devices as really being an opportunity to bring patients who maybe normally wouldn’t [wear hearing aids] to actually try them out,” said Carolyn Falls, director of audiology at the University Health Network’s Toronto General Hospital.

The main concern that audiologists raise is that people may find OTC hearing aids don’t work well and give up wearing them.

Their warning in simple terms: if you buy hearing aids off the shelf like you buy a television, you might not choose the model best suited to improve your hearing.

“Hearing loss and auditory system deficits are best managed through the development of a customized, person-centered treatment plan that audiologists are uniquely qualified to provide,” says a statement by Speech-Language and Audiology Canada, the organization that represents the profession.

WATCH | What would it take for OTC hearing aids to come to Canada?

What over-the-counter hearing aids in the U.S. could mean for Canadians

Hearing aids are now available south of the border in such stores as Best Buy and WalMart for as little as $200 US per pair.

A range of people connected to the field of hearing loss expect that Canada will follow the lead of the U.S., but there’s no consensus on how quickly that will happen.

The path forward is made slightly more complicated by the reality that it would require both federal and provincial governments to make changes.

Health Canada regulates hearing aids as medical devices, so the federal agency would have to approve OTC models for sale in Canada.

It’s up to the provinces to decide whether such hearing aids could be sold over the counter. For instance in Ontario, provincial law says only a registered health professional can prescribe a hearing aid, and prohibits providing anyone a hearing aid without a prescription.

Dr. Paul Mick, an ear nose and throat specialist and associate professor at the University of Saskatchewan, said he believes there is a very good chance that hearing aid regulations will change in Canada.

“I think this is a great opportunity, what’s happening in the United States, to learn what works and what doesn’t work and then take that knowledge and build our own program,” Mick said in an interview with CBC News.