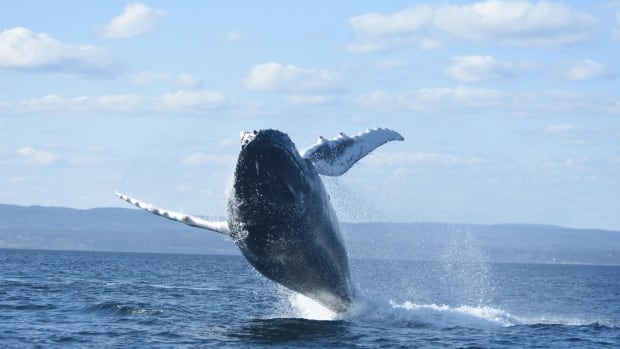 
Experts are noting that the number of whales observed in Quebec’s St. Lawrence River is low, even though whale observation season isn’t over.

Specialists believe the whales’ habits may be changing, according to the Group for Research and Education on Marine Mammals (GREMM).

Tim Perrero, who is responsible for the census of large whales with the GREMM, said the whales’ stays in the estuary are “extremely short” compared to their usual stays. Some remained in the area for only a week, while others only stayed for a few days, he said.

That was the case for a humpback whale nicknamed Tic Tac Toe, who only did several short stays in the estuary this season, despite usually coming and staying long-term.

In addition, fin whales, normally faithful to the estuary, still haven’t been seen this year. Perrero said there are usually at least four that spend about half the season in the area.

Samuel Turgeon, an ecologist with Parks Canada, said his data also suggests that the animals aren’t staying as long, choosing to explore elsewhere. The Mingan Island Cetacean Study (MICS), in northern Quebec, also found that the number of whales using the Jacques-Cartier strait has declined over the years.

Meanwhile, whale sightings are on the rise in other regions of the province. In the Saguenay-St-Lawrence Marine Park, near Tadoussac, Que., the number of humpback and fin whales has exceeded seasonal averages since 2018.

Véronique Lesage, biologist at Fisheries and Oceans Canada, said that even if the number of whales seems low in the estuary, it’s not yet at a historic low compared to the last decade.

So far, seven fin whales have been identified this year, a number similar to levels seen between 2014 and 2017, she said. There have been 37 humpback whale sightings, which surpasses previous years, except for 2021.

In the Gaspésie region, about 20 humpback whales and a few fin whales were observed at the start of the season, but have rarely been seen since.

The GREMM underlined that it is normal to see fewer whales in July than in June, but that it is unusual to see a complete absence of blue whales and only a few fin whales.

Experts looking into the changing habits of the whales suspect that the issue may have to do with their prey, as whales mainly visit the St. Lawrence River to feed.

Disturbances in the ecosystem, including warmer waters and less ice cover, could be affecting their food supply.

Sask. nurse says she’s burnt out only 8 months into the job

Woman in pool struck by tree, killed in Riverdale, Bronx