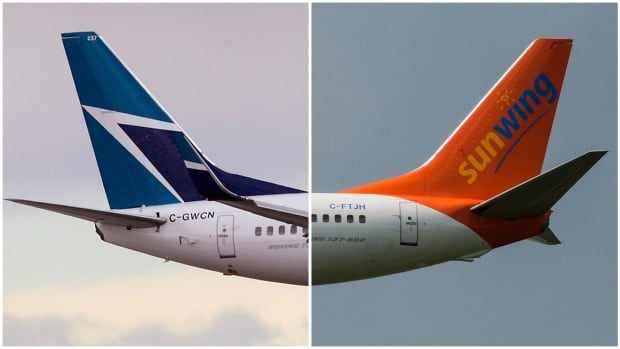 WestJet released a statement on Wednesday confirming the news, adding that “the transaction will bring together two distinctly Canadian travel and tourism success stories.”

Crystal Hill, vice-president of CUPE 4070, the union that represents WestJet flight attendants, said executives informed her that the purchase announcement would be going ahead Wednesday.

Terms of the acquisition remain unclear, with a virtual town hall between management and employees planned Wednesday in Calgary, where WestJet is based.

Both airlines are privately held. Toronto-based Sunwing is controlled by the Hunter family and WestJet was purchased by Onex Corp. in 2019.

Shortly after the announcement of the acquisition, the federal Competition Bureau said it would review the proposed transaction.

“Under the Competition Act, the Competition Bureau has a mandate to review mergers to determine whether they are likely to result in a substantial lessening or prevention of competition,” the statement read.

The acquisition would increase WestJet’s flight footprint to sun destinations and European cities after what has been a tough two years for the airline and travel industries.

‘Bloodbath’ on the horizon for airline industry, says expert

The acquisition isn’t going to be the last one we see, said John Gradek, a lecturer and co-ordinator of the aviation management program at McGill University in Montreal.

“Consolidation is starting to happen in the industry,” said Gradek.

With airlines like Porter and Flair planning to expand their presence in Sunwing markets, Gradek said a “bloodbath” is on the way.

Flair Alirlines is planning to expand its fleet to 30 planes by mid-2023, with a goal of reaching 50 planes in five years.

“Sunwing knows it’s either get out now while the going is good and there’s value or you go through a severe downturn in terms of competitive presence and a reduction in profitability,” said Gradek.

As for WestJet, Gradek said its interest in Sunwing is likely driven by its brand appeal and the opportunity to expand into the Eastern Canada market.

“What I think WestJet is doing is really getting themselves into the eastern Canadian leisure market,” said Gradek, adding that expanding the WestJet brand into Eastern Canada instead would be a costly endeavour.

Lawyers for families argue gunman’s spouse must be witness in N.S. shooting inquiry