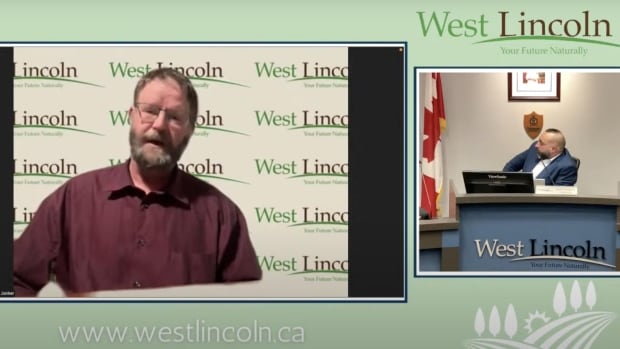 
Councillors in the Niagara-area township of West Lincoln, Ont., have voted against asking the local integrity commissioner to investigate whether Coun. Harold Jonker violated its code of conduct by taking part in the anti-mandate protest around Parliament Hill.

An investigation, proposed by Councillors William Reilly and Cheryl Ganann, would have also looked into a “welcome back party” that saw a long line of trucks and other vehicles honk and parade throughout the town Monday night.

But it failed to find support during a committee meeting Tuesday evening, with five council members, including Jonker, voting against it.

“Just because you think you have these absolute freedoms, you can just go and do whatever you want to do, you are not exempt from consequence,” said Reilly before the vote.

Jonker countered he was “saddened” some councilllors wanted an investigation, adding he believed it would be a waste of taxpayer money.

“Whatever the integrity commissioner says … it will not change my resolve of what we did, the change we made,” he said.

Jonker, an owner of Jonker Trucking Inc., previously told CBC he was the captain of the Niagara contingent of the convoy, and he and his wife were in the first truck to arrive in Ottawa on Jan. 28.

When reached in Ottawa last week, he said he was resolved to stay, despite all three levels of governments declaring a state of emergency, and Ottawa police serving notice to protesters who remained there that they would “face severe penalties” if they did not “cease further unlawful activity” and leave.

Jonker has not responded to an email or phone messages from CBC this week seeking comment on whether his bank accounts had been frozen, if any of his trucks taking part in the occupation had been seized or if he or any of his employees were among the 191 people police say they arrested.

Reached by phone Tuesday, Tim Jonker, traffic manager at Jonker Trucking, said he did not wish to comment on whether the company had been impacted.

“If I see some CBC articles about the tyranny of our government then I might,” he said.

During Tuesday’s committee meeting, West Lincoln Mayor Dave Bylsma spoke out in defence of Jonker and said the councillor hadn’t broken any laws.

“He hasn’t been charged, or fined or anything like that, despite what the public opinion may or may not be,” said Bylsma.

The mayor also said anyone who voted in favour of the integrity commissioner investigation was trying to “silence” debate and take part in “intimidation.”

CBC has not independently verified the mayor’s statement about Jonker not facing charges.

Ottawa police also did not immediately respond to emails seeking information about arrests and whether Jonker Trucking vehicles had been seized.

The committee meeting was heated at times, with both Bylsma and Reilly being asked by the chair to control themselves.

Ganann read out the resolution, which asked the integrity commissioner to investigate Jonker’s actions “including his leadership and involvement” in the convoy and in the parade that took place in West Lincoln Monday night.

It suggested sections of the township’s code of conduct that may have been violated, including those around accepting gifts, use of influence, refraining from making false statements and recognizing councillors represent the township.

Both Reilly and Ganann said they’d received emails, calls and messages from community members asking about Jonker’s presence in Ottawa and what council was doing about it.

The community concerns included a convoy that greeted Jonker and others as they returned home, according to Ganann.

“Your wonderful welcome back party that you so appreciated turned into something that was not appreciated by people who were trying to put their children to bed on a school night,” she said.

Bylsma pointed to the gathering as proof of support for Jonker and the protest.

“There were residents lined up in the longest parade ever known to West Lincoln to receive these people who protested on their behalf in front of the halls of Parliament,” he said.

Niagara police said officers responded to “concerns regarding the large number of trucks” in West Lincoln.

“We recognize that protests and demonstrations can be frustrating to the community as a whole,” read an email from spokesperson Stephanie Sabourin. “At this time, no charges have been laid.”

‘You don’t get to pause’ being a councillor: Reilly

Coun. Jason Trombetta, who voted against the investigation, compared the parade to soccer fans honking and cheering after their team won the Euro Cup. He also said there’s nothing to stop anyone, including members of council, from filing an complaint on their own to the integrity commissioner.

Other council members who voted against the integrity commissioner investigation spoke about the high cost it could carry and said Jonker went to Ottawa as an individual, not a councillor.

Reilly pushed back, arguing previous integrity commissioner investigations and the town’s code of conduct show councillors represent the township at all times.

“You don’t get to pause, you don’t get to say, ‘Hey listen, I’m not going to be a councillor right now. Right now I’m just going to do what I believe in’ … even if it’s contradictory or not in the oath that we’ve taken to go into office.”

He added that Jonker did more than just protest by taking part in interviews, including one with Fox News.

Mike Rehner, one of the representatives for Ward 1, said he believed the investigation would amount to spending a lot of money to win an argument and that should be settled at the next municipal election in October.