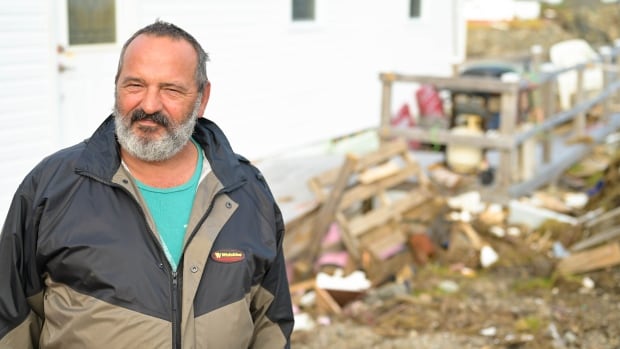 Weeks after Fiona hammered Port aux Basques, residents are still cleaning up — and looking to tomorrow

They speak of houses lost, of belongings crushed, and of a cleanup effort that’s really still in its infancy, even though the storm was weeks ago.

On Sept. 24, post-tropical storm Fiona ripped the coastline down to bare rocks, swallowing everything in its path, including many homes — and even one life — on Newfoundland’s southwest coast.

People have been picking up the pieces ever since, but the town has changed — forever.

“I know today is pretty bleak,” said Channel-Port aux Basques Mayor Brian Button this week. “I know it’s been a lot of stuff has been shattered in one’s life. But I’m figuring that tomorrow we’ll, we’ll get to a brighter day and we’ll get through.”

The streets are coming alive in Port aux Basques, but a blanket of sombreness covers the people.

There’s a man sifting through earth a foot deep in his basement. He’s looking for his power tools, buried somewhere in the rubble. One by one he plugs them in — nothing. Like it did to the home he spent decades working on, the salt water has ruined each one.

A woman talks of her elation on finally getting temporary housing. But in moving the few belongings she has left, she falls and breaks her wrist, and her small victory is dampened by pain and lessened mobility.

A man gives spiritual thanks to those who were looking out for him and his brother. During the storm, his brother’s house shook, ready to leave its foundation. The man grabbed his boots and headed next door to help. His brother was caught in a wave. Grabbing his brother’s hand, he pulled one way, while the ocean pulled the other. Luckily for both, that grip, and help from his son, brought his brother to safety.

A couple lament the change in their neighbourhood. Houses are missing and the view is different, but it wasn’t the buildings that made this place, they say — it was the neighbours. Their friends. And without them nearby, their place no longer feels like home.

‘This was her world’

From the outside, his house looks intact, but there’s three feet of water in his basement, mixed with home heating oil that streamed in from a ravaged home nearby.

He’s now in temporary housing but has no word on what will happen beyond the winter. His house has been condemned, he said, but it’s hard to let go.

“It’s things that you lose sleep over,” he said. “Everything is on your mind. “It’s not just friends, it’s basically family. We speak to each other, we acknowledge each other, we help each other … I want to [stay] in Port aux Basques. This is home.”

Taylor moved into the home 28 years ago and finished paying the mortgage two years ago. He’s done a lot of modifications over the years, including installing a wheelchair ramp for his adult daughter, who in non-verbal and has Pitt-Hopkins syndrome, a rare genetic condition that causes cognitive and physical impairment.

“[It’s like] she was just ripped out of her house, put in a car and took away and she can’t understand why she can’t go home,” said Taylor. “It’s all she’s know, this was her world.”

Taylor and his wife are in their late 50s. He was eyeing retirement in two years. It’s too late to start over, he says.

Taylor says he is waiting to see if insurance will cover damages to the home before they decide what to do. Until then, he figures they will remain in temporary housing until the spring. It’s hard leaving the old neighbourhood.

Todd Charlton has lived in his downtown neighbourhood for less than two years, but it’s home for him and his family.

His house faces the ocean, separated from the shorelines by a road and what was neighbours’ homes and sheds across the street.

He was evacuated for the storm, stepping over lines strewn across the ground from fallen poles, but moved back in when his home passed inspection.

“I have three kids that I had to worry about, but everything, I guess, turned out good.”

Charlton and his family were displaced for about two weeks. Now that he’s back in the home, he doesn’t plan to go anywhere else.

“They can fix the street,” he said. It just needs some dirt to fill in the holes and a little more gravel, he said.  “As long as we don’t have another hurricane.”

Charlton, who grew up in Ontario, says he’s been heartened by the way the community has reacted to the devastation, and the unwavering support shown for everyone displaced.

Rene Roy edits and runs the Wreckhouse Press, a weekly newspaper based in Port aux Basques. From covering the storm first-hand to stories of recovery in the following days, he says, Fiona was like nothing else.

“The feeling in the community now is definitely altered,” he said. “Before, you used to be able to go to a grocery store and say, ‘Hi, how you doing?’ And, ‘How’s your day going?’ And now when you go to a grocery store, you just merely nod or shake your head.… This is something that’s impacted everybody, not just people who lost their homes.”

Port aux Basques is an area of Newfoundland that’s used to storms. Perched on the southwest corner of the island, it’s usually the first to battle unwanted weather from the Atlantic, and regularly sees winds over 100 km/h.

Its people have grown accustomed to it, says Roy, but there’s a new appreciation now for what Mother Nature can deliver.

“I’ve heard a lot of people say that this is something they’ve never seen before and hope to never see again,” he said. “But I have to think that it’s made a lot of people more cognizant of watching the weather now.”

‘We will get there’

Mayor Button has punched the busiest three weeks of his time in office.

From daybreak to dusk, he’s been on the phone or computer, or meeting with people to facilitate the continuing cleanup efforts.

Button says he’s always known Port aux Basques as a community filled with people who look out for each other, and he wasn’t surprised to see that shine through the devastation of the past few weeks.

People understandably become upset when the town is not always able to provide the answers they need, the mayor said. Button says he’s borne the brunt of that frustration at times over the past few weeks but harbours no resentment or ill will.

“I totally understand. I get it. If I were in your shoes, I’d be probably doing the same thing of wondering, you know, what’s happening?” he said. “If I thought that people weren’t working and we weren’t getting the effort to try to get us there, I’d be ranting and roaring; I’d be the first one out there doing it.”

He’s happy the town is able to assist the provincial response team on site in providing valuable local knowledge needed to assess the fallout from the storm.

He says it’s been an eye-opener for all involved, and realizes it may not be the last storm of this magnitude to hit this town of 4,067. But the priority right now is dealing with Fiona’s effects and rebuilding a community that’s suffered immensely.

Alleged U.S. human smuggler under investigation by RCMP in death of Indian family at Canadian border