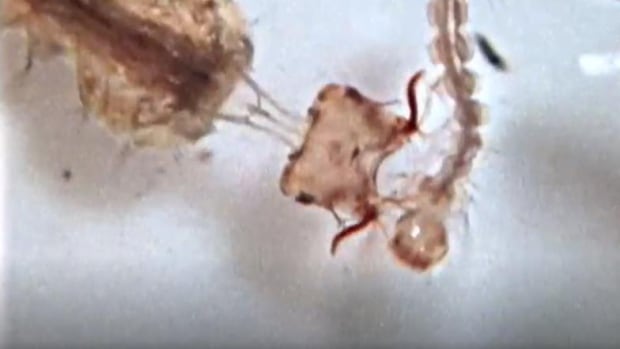 As It Happens7:05Baby mosquitoes launch their heads like harpoons to ensnare prey

“I’ve used the word jaw-dropping, stunning,” Bob Hancock, a biologist at the Metropolitan State University of Denver, said of the footage.

“They’re kind of ambush predators, in that if another mosquito larva comes wiggling into their proximity, then it happens — and it happens fast,” he told As It Happens host Nil Köksal.

Hancock is the lead author of a study examining these hunting techniques, which he and his colleagues documented for the first time. Their findings were published this week in the Annals of the Entomological Society of America.

But they’re so small, and it happens so quickly, that researchers have never been able to observe the phenomenon in detail — until now.

The team filmed the tiny killers in slow motion under a microscope in a process called microcinematography.

What they saw blew their minds, Hancock said.

While in its larval form, the Psorophora ciliata — a type of mosquito — launches its head like a harpoon to capture and devour its prey. (Metropolitan State University of Denver)

Two species — Toxorhynchites amboinensis and Psorophora ciliata — “launch their heads, literally, from their bodies,” like a harpoon toward their prey, Hancock said.

“And as they’re doing that, their mouthparts are gaping and they clamp down on the prey, and it’s over quickly because they end up just shovelling it into their bodies,” Hancock said.

Another species — Sabethes cyaneus — coils its long body toward its unsuspecting prey, grabs it with its tail, then promptly stuffs it into its mouth.

“We’ve never seen either of these ways demonstrated before in any circumstances,” Hancock said.

While in its larval form, the Sabethes cyaneus — a type of mosquito — arches its torso to scoop up its prey and eat it. (Metropolitan State University of Denver)

Entomologist Daniel Peach, an assistant professor at the University of Georgia, says most mosquitoes in their larval form are detritivores, meaning they “filter-feed” off of nearby detritus, hoovering up decaying materials and microorganisms.

That some species have evolved to hunt as larvae, he says, is “really neat.”

“I think this research highlights that mosquitoes aren’t monolithic, each species is unique and has a different niche, including in the larval stage,” he said in an email to CBC.

“I think it’s some very cool work that showcases interesting mosquito behaviours that are relatively overlooked. Aquatic predators, from sharks to insects, face some unique challenges in how they capture prey, and it is fascinating to learn more about how predatory mosquito larvae do so.”

For Hancock, the footage is a culmination of decades of research.

He first became fascinated with how baby mosquitoes hunt when he was a student at Ohio State University. His professor brought out some Toxorhynchites amboinensis larvae, as well as some prey larvae in small containers, for the class to observe.

“And he said, ‘Get a microscope and see if you can figure out how they’re capturing prey.’ And we all did,” Hancock said.

But it all happened so fast — about 15 milliseconds, to be exact — it looked like a blur. All the students could really see was the mosquitoes eating their prey after they’d caught it.

Since then, Hancock says he has become more and more obsessed with mosquitoes.

“I couldn’t take my eyes off of these mosquitoes. They’re beautiful,” he said. “They still just reach me in that way. And so my pursuits have almost been aesthetic, if not artistic.”

Some days, he says he feels as much like an artist as he does a scientist. He’s drawn to his subjects’ intense colours most of all.

“I have this — it’s almost an addiction — to iridescence, like really beautiful metallic colours,” he said. “And two of the stars of this paper and these videos, as adults, have beautiful, iridescent scales.”

Sabethes cyaneus, in particular, is bright blue and silver.

The biologist is excited to see what other wonders about mosquitoes microcinematography will unveil.

Already, he says he and his colleagues are using the technology to observe how adult mosquitoes lay eggs in tree holes — something they do “by a catapult action.”

This could be VW’s best SUV yet