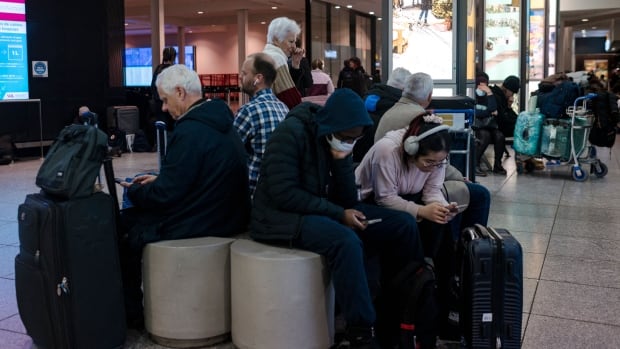 Was your travel disrupted? Here’s what you’re owed — and what you won’t get


The weather may be clearing, but many travellers are still unable to reach their destination or return home after last week’s winter storm. Many others are still waiting for answers and refunds after their travel plans went awry.

Hundreds of Canadians have spent days stuck in Mexico, Cuba and the Dominican Republic after Sunwing repeatedly cancelled their flights home. Stranded flyers say they have received little information or support from the airline.

Meanwhile, some rail passengers are still waiting to reach their destinations after Via Rail trains were halted between Windsor and Quebec City overnight Friday into Saturday, leaving travellers stuck on board for more than 20 hours. Via Rail resumed service between Toronto, Ottawa and Montreal on Tuesday but warned of significant delays due to congestion along the routes.

There are clear rules for Canadian airlines in case of delays and cancellations, but exactly what passengers are entitled to depends on the cause of the disruption. For instance, if passengers are grounded due to reasons within the airline’s control — such as crew shortages — they are entitled to food and drink, accommodation if they have to wait overnight for a new flight, and compensation if their flight delay was more than three hours.

But if the situation is outside of the airline’s control, such as bad weather, passengers don’t get those same standards of care or compensation.

Large airlines are also supposed to rebook passengers on a new flight to their destination within 48 hours of their original departure time, even if that means booking them a ticket on a competitor’s flight. But small airlines, such as Sunwing, are required to only rebook passengers on their next available flight, or on another airline they have a partnership with.

In a statement, Sunwing said it was working to organize “recovery” flights, and said customers could book their own flights home on a different airline and then submit a refund request for their unused Sunwing flight.

John Lawford, executive director of the Public Interest Advocacy Centre in Ottawa, said it appeared that airlines were not being “forthcoming” with passengers about their right to be rebooked on another carrier.

“Insist on trying to get a flight on a different airline…. Passengers should know they have that right if they can’t be rebooked within two days,” Lawford said.

He recommends that any delayed or stranded passengers keep all of their receipts and file a claim for compensation with their airline.

There are no equivalent passenger rights protecting rail travellers — meaning Via Rail customers whose trips were disrupted in recent days are entitled only to whatever the company wants to give them.

In a statement to CBC News on Tuesday, Via Rail said passengers whose trains were cancelled between Dec. 24 and 26 would automatically receive a full refund. Passengers could cancel Dec. 27 trips online and obtain a refund.

Customers would need to contact Via Rail to request a refund for a connecting leg of their journey or a return trip.

It was unclear whether passengers who spent lengthy periods trapped on stopped trains last week would receive any compensation.

Via Rail said all trains on its Toronto to Ottawa and Toronto to Montreal routes would be running on the regular schedule beginning on Wednesday, but delays were possible.

In the United States, Southwest Airlines is facing extra scrutiny after cancelling thousands of flights and leaving travellers stranded at airports across the country in recent days.

The U.S. Department of Transportation and the U.S. Senate committee on commerce, science and transportation both plan to look into the airline’s actions — including why it cancelled even more flights after the worst of the bad weather had passed.

Lawford suggested that Canadian travellers could put pressure on lawmakers to improve air passenger rights by contacting their local MP to share their travel experience.

In a statement to CBC News, a spokesperson for federal Transport Minister Omar Alghabra said his office and Transport Canada were “in regular contact with airlines and airports to ensure they have what they need to keep passengers moving safely.”

Regarding Via Rail’s disruptions, the spokesperson said the government would “hold all those involved accountable,” without providing further details.

High inflation is coming for the beaver on your money. How long can the nickel last?