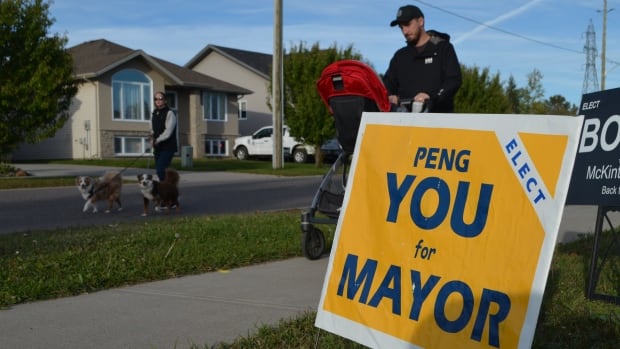 Voters in northwestern Ontario have plenty of options in upcoming mayors races. Few of them are women


As part of its coverage of Ontario’s 2022 municipal election campaign, CBC News compiled and analyzed data from 414 municipalities across the province holding elections this fall for the series No Ballot Required.

Read Part One, about the growing number of acclaimed positions,  Part Two, about the increased challenges for small town mayors and Part Three on local candidates who say they are more motivated than ever.

When many voters in northwestern Ontario go to cast their ballots in this fall’s municipal election, they won’t have the option of voting for a woman for mayor.

In northwestern Ontario’s 10 most populous municipalities, only two women are running for mayor. The four largest — Thunder Bay, Kenora, Dryden and Fort Frances — do not have a single woman seeking the mayor’s office, according to a CBC News analysis of provincial candidates lists.

In Shuniah, a municipality east of Thunder Bay with a population of just over 3,200, Wendy Landry has been acclaimed as mayor for a third term.

Landry, who in 2014 was the first Indigenous woman to be elected mayor of an Ontario municipality, said it’s a job that takes a lot of time, and has a lot of pressure.

“Every move, every word you say, how you look, how you dress, how your present, is being scrutinized, especially on social media,” she said.

“We ran for municipal election, those of us who are mayors and on council. But our families didn’t,” she said. “There’s been times when families have to hear what’s being said publicly about their moms and wives, and that’s a big thing when you’re taking the decision of running for municipal council and being the mayor.”

Landry said potential candidates also need to balance out their family and professional responsibilities with the commitments of the job.

One incumbent not running again

June Caul became the first female mayor of Fort Frances, a town of just under 7,500 people, when she was elected in 2018. Earlier this year, Caul decided to not seek a second term.

“I have loved this job, even though it’s been difficult. It’s been difficult emotionally, mentally, physically at times,” Caul said. “I’m tired. I’m exhausted. I knew that I had to step back from all of this.

Caul said she first really noticed the nasty side of the role on the day of her election four years ago, when she learned of a letter written about her that she described as “heinous” and “very hurtful.”

She said she also heard about discussions happening throughout the town questioning her competence for the job, despite having previously served as a councillor. Caul said she also confronted former mayors behind closed doors over comments made about her.

“A couple of these people very much didn’t respect me in the position I was in, and made it very difficult for me to be able to often get through days without feeling like, wow, it was difficult,” she said. “I had some very dark days in the last couple of years.”

Caul described this term of council as particularly challenging, between the sale and subsequent demolition of the town’s mill, the COVID-19 pandemic, and flooding earlier this year from record-high water levels on Rainy Lake.

Caul said, since announcing she wasn’t going to run again, she’s heard a positive response from the community.

“I have more support now than I certainly did when I became mayor. That makes me feel like I did something right,” she said.

Landry, who has also served as the president of the Northwestern Ontario Municipal Association since 2017, said she has had several conversations with women considering a mayoral future. One of those individuals was Cheryl Fort, who was elected mayor of Hornepayne in 2018 and has been acclaimed for another term.

“We need diverse groups at the table to bring a holistic lens to municipal decisions that affect our community, and affect multiple communities within our community.”

The date for municipal elections in Ontario is Oct. 24, though some municipalities have online or telephone voting periods that begin earlier, while others have advance voting days.

Town saved from brink of destruction