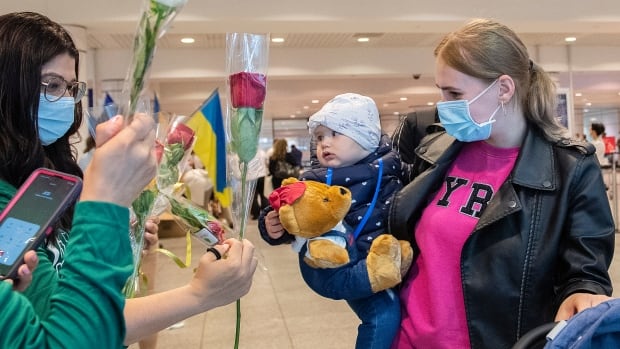 Volunteers taking charge as Ukrainians arrive in the thousands


From a slow trickle in March and April to a steady stream today, Ukrainians fleeing Russia’s brutal invasion of their country have been arriving in Ottawa in the hundreds, perhaps thousands.

By one estimate, they could account for more than one per cent of the city’s population by year’s end.

Helping welcome this sudden wave of newcomers is a network of settlement agencies and volunteer groups that, due to the unique circumstances, are often learning as they go.

“We’re building the road as we drive on it,” said Louisa Taylor, director of Refugee 613, a group formed in 2015 to help with the arrival of Syrian refugees and which is now helping co-ordinate efforts to welcome the Ukrainians.

That includes everything from finding them a safe place to stay to arranging health cards, opening bank accounts and enrolling their children in school.

Left to their own devices

Unlike the Syrians, most of whom arrived as government-assisted or privately sponsored refugees with immediate access to housing and other essential services here, the Ukrainians are arriving under a purpose-built visa program called Canada-Ukraine Authorization for Emergency Travel (CUAET).

Under CUAET, Ukrainians can live, work and study in Canada for up to three years, but are largely left to their own devices once they’ve landed.

There’s a heck of a lot of people already here and more are coming, and we’re not prepared.– Louisa Taylor, Refugee 613

Based on a survey of CUAET applicants by Immigration, Refugees and Citizenship Canada, it’s estimated as many as 3,200 Ukrainians have already arrived in Ottawa, and as many as 12,500 could be here by the end of 2022.

But Taylor says no one really knows how many are here or how many more are on their way.

“There’s no tracking or accounting for who’s coming. It’s just like, how do we know how many tourists are in Ottawa on a given day?” she said.

“Nobody knows. What we do know is there’s a heck of a lot of people already here and more are coming, and we’re not prepared.”

Ukrainian Settlement Helpers Ottawa (USHO) came into being because founder Rachel Horsley needed to furnish a room for her own guests. She realized the city lacked a dedicated online meeting place where potential hosts could turn for information, advice and yes, gently used beds.

Before long, Ukrainians hoping to escape the war discovered the Facebook group and began sharing their stories. Just as quickly, Ottawans began offering bedrooms and basement suites in their own homes.

The volunteer group, which attained not-for-profit status last week, now has more than 4,400 members and has helped facilitate nearly 200 matches between Ottawa-area hosts and guests from Ukraine — the equivalent of some 10,000 nights of accommodation, according to the group.

It’s believed many, many more have made their own arrangements, including staying with friends and relatives within Ottawa’s established Ukrainian community.

“Because people can communicate through social media, they’re not necessarily relying on the same government channels to come to our country,” said group administrator Sophie Hargest, who, like her friend Horsley, has deep roots in the social services sector.

“They want to have a freer approach to how they find support in the community.”

Besides finding temporary housing for newcomers, volunteers also welcome them at the airport and ferry them to appointments. There are picnics and walking tours, and free summer camps for Ukrainian children.

One subgroup of volunteers even collects and repairs donated bicycles for the newcomers.

The group has also raised thousands of dollars to buy airline tickets to Canada for Ukrainians who have lost everything. (The Canadian government has so far provided three charter flights from Poland, but none to Ottawa).

To say it has all happened quickly is a vast understatement.

But according to Hargest, USHO has been able to fill a gap left by more established agencies such as the Ottawa Community Immigration Services Organization (OCISO) and the Catholic Centre for Immigrants (CCI), which continue to serve previous waves of refugees while also offering their resources and expertise to the network of groups helping the Ukrainians.

“Settlement services are really quite taxed right now in terms of the volume of their caseload, so we kind of stepped in,” Hargest said. “We are a small volunteer-led group, and so we can be nimble.”

In recent weeks, USHO has begun “migrating toward a more formal process,” Hargest said, including training volunteers to conduct home visits and intake interviews and drawing up formal agreements between hosts and guests.

“Our biggest concern is that people are going into homes that are unscreened,” said Hargest. “We call ourselves a group that’s safe, and if we’re going to do that we have to take steps to ensure that is the case.”

Taylor said she’s aware of a couple cases where guests have had to be extricated from homes where they felt unsafe.

“A lot of those hosts have not been vetted in any way. [USHO is] doing their best to create the best self-matching process they can, but they’re the first to admit that it’s not foolproof,” she said.

“Many advocates have been saying we need good systems here, we need vetting, etc., but most formal organizations were not willing to take on the role of matching volunteer hosts with displaced Ukrainians because their insurance would not cover them for the liability.”

Another emerging concern is the threat of “bad actors” among prospective employers, Hargest said.

While the USHO Facebook page is full of good news stories about local companies hiring Ukrainians within days of their arrival, there have been some dodgy situations as well.

“I think the biggest risk right now are people who are actually exploiting youth and women with children to enter into employment that’s unsafe or unclear, that’s underpaying, that’s not regulated,” Hargest said.

“People are actually talking about creating employment agencies through this group, not understanding that what they’re doing is skirting human trafficking.”

USHO, which has been operating “out of our basements,” according to Hargest, also hopes to start providing some services through Maidan Market, a free store for displaced Ukrainians at Westgate Shopping Centre.

None of it would have happened without volunteers, but Taylor said she’s already seeing signs of burnout.

“We see new folks come in with so much energy and drive, and then you see them start to fade because you can’t exist in emergency mode forever,” she said. “It’s just not sustainable.”

Refugee 613 has been playing the role of shepherd, helping both the volunteer groups and the established settlement agencies including OCISO, CCI, Jewish Family Services and others to co-ordinate and share their knowledge and resources.

They’re finding their way together but none of it is ideal, Taylor said.

“Nobody is thrilled with the idea of displaced people coming from a war zone, being hosted by volunteers with no training or understanding of the refugee experience, and in most cases no police screening and very little support,” she said.

“But that is what’s happening because the federal government has not stepped up yet and the city certainly is not stepping up. People don’t want this to be the outcome, but that’s where we are.”

USHO, which has received no funding for their work, is now raising donations to create a database that could help determine not only the true number of displaced Ukrainians in Ottawa, but also where resources are needed the most.

It’s exhausting, sometimes thankless work, but Hargest said volunteers are up to the task because the need is unrelenting.

“I’ve never had a moment that’s made me wonder what I’m doing, not one,” she said.

Ottawa Morning10:11Volunteers filling the gaps as Ukrainians arrive in the thousands

An estimated 3,200 people fleeing the Russian invasion of Ukraine have landed in Ottawa under a special visa. But there are some specific challenges to get the newcomers settled here.

Monkeypox can ‘masquerade’ as other conditions, with wide range of symptom severity