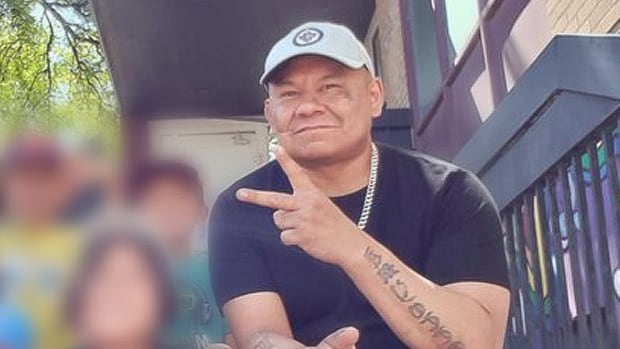 
WARNING: This story contains graphic content and details of violence that some readers may find disturbing.

A video has surfaced on social media showing a Vancouver police officer shooting an Indigenous man with a bean bag gun — an incident which occurred in August and is the subject of an investigation into police’s use of force.

Chris Amyotte, a 42-year-old father of eight from Winnipeg who was visiting family in Vancouver, died on Aug. 22 after an interaction with Vancouver police officers on the Downtown Eastside during which he was shot with a bean bag gun.

The Ojibway man’s death has drawn calls for police accountability from his family who say Amyotte was shot while unarmed and calling for help. Witnesses and the Vancouver Police Department have confirmed he was asking for help.

The incident is the subject of an investigation by the Independent Investigations Office (IIO), B.C.’s civilian-led police oversight agency, into whether police use of force was appropriate.

The video, the first footage of the incident to be shared publicly, was originally posted on TikTok on Aug. 26, just days after the shooting.

The three-and-a-half minute clip, which appears to be filmed from an apartment several storeys up across the street, shows Amyotte leaving Laxmi Convenience on East Hastings Street on the morning of Aug. 22.

In the video, Amyotte is naked and holding a white jug, which he repeatedly pours over his head, emptying what appears to be milk over himself.

The events in the video match the description from witnesses who said Amyotte was in distress from a bear mace attack and was attempting to relieve the burning sensation by removing his clothes and dousing himself in milk.

WARNING: This video depicts graphic content and violence. CBC News has edited it for length.

A video originally posted by TikTok user tarajones65 shows Chris Amyotte in the moments before he was shot by Vancouver police with a bean bag gun.

Amyotte wanders up and down the sidewalk in the 300-block of Hastings Street, pouring milk over himself as half a dozen bystanders watch.

Approximately 90 seconds into the video, a police vehicle pulls up and two officers exit and approach Amyotte.

The Indigenous man walks away quickly from the officers, who are joined by more officers, one of whom is holding a long gun pointed towards Amyotte, who suddenly crumbles to the sidewalk and is surrounded by police.

The person who posted the video, a TikTok user identified as Tara Jones, commented that CPR was performed on Amyotte as he lay on the sidewalk for over an hour.

Samantha Wilson, Amyotte’s cousin, told CBC she’s grateful the video exists because it answers a lot of questions about his last moments.

Wilson has been aware of the video’s existence for months and posted it on her own Twitter account on Tuesday. Despite the initial shame she felt seeing it, she now feels it should be shared and viewed widely.

She says the video has only reinforced her family’s belief that police’s use of force was not justified.

“I have a lot of questions as far as their tactics for de-escalation because in the video they followed him very closely,” she said.

“They damn well knew that he was unarmed and he wasn’t a threat to anyone based on all the bystanders who were there.”

The IIO says until CBC News shared the video with them Thursday morning, they had no knowledge of its existence.

“We do have video of that event from a different angle than this,” Chief Civilian Director Ron MacDonald told CBC. “This does offer another perspective and is very helpful.”

MacDonald says IIO investigators previously canvassed the neighbourhood and spoke to many witnesses. He says this latest video shows more of what happened before police arrived.

“That type of video helps us corroborate or not corroborate some other statements that we have received about how the individual was acting and what he was doing prior to the arrival of police,” he said.

MacDonald says those facts are relevant to determining whether the force used by police in this case was appropriate.

In the weeks after Amyotte’s death, VPD acknowledged in a statement that Amyotte “did ask for help from a number of bystanders, who did not offer assistance.”

The statement also said officers attempted to “communicate with the man verbally” when they arrived and that witnesses reported a confrontation.

VPD Sgt. Steve Addison has said a bean bag shotgun is “a safe and effective less-lethal tool” and “is used as an alternative to lethal force and can be deployed against a person who is acting violently or displaying assaultive behaviour.”

Flu and RSV on the rise, closes at least one school