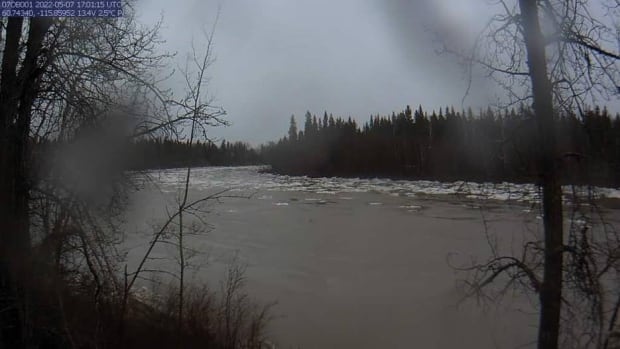 
Residents of Vale Island and West Channel in Hay River, N.W.T., are being asked to leave for higher ground as waters risk flooding the area.

Localized flooding has been reported around the West Channel and West Point First Nations area, as well as the northeast areas of the East Channel, and at Paradise Gardens, the town said in an emailed notice at 11:30 a.m..

Ice jams are occurring in both West and East Channels and the risk of more flooding is high.

“Any residents still on the island are advised to evacuate,” the notice says.

An evacuation order went into effect at 2 a.m. Saturday morning.

Kevin Wallington, a Hay River resident, said the notice came after significant rain fall and a power outage that lasted until Saturday morning.

“It was a little bit like a Stephen King novel. We kind of had all kinds of things happening at the same time,” he said.

“It was quite eerie actually departing the old town with everything that was going on in darkness.”

A local state of emergency was declared around 1:30 a.m.

The majority of the river ice is still yet to pass through the community, and precipitation warnings in place for Northern Alberta and the South Slave regions will worsen conditions, the town notice says.

Those leaving for flood risk zones are advised to register on the Hay River website.

Some of the accommodation options for those leaving include the RV Park at the Hay River Community Centre, for those who have access to an RV or camper. Power will be provided and there is no cost to those using the sites.

There is also the evacuation centre at the Hay River Community Centre, where a cot and blanket will be provided, as well as basic food. There will be no cost to those staying there.

Residents are also able to stay in commercial accommodations, but are responsible for the costs. Residents can also stay with family and friends on higher ground or in other communities.

In an the email, the town wrote emergency officials will be monitoring the area and providing updates throughout the day.Kátł’odeeche First Nation Chief April Martel has been posting live videos of the water levels to Facebook.

Water levels and flow rates throughout the entire Hay River basin are very high, some areas by the Hay River border are reaching historic levels.

Officials with the territorial government said high water levels alone typically do not cause flooding in the N.W.T.; ice jams, which are hard to predict, are usually the cause. But high water levels can worsen damage caused by flooding.

Chelsea soccer club being sold to L.A. Dodgers owners, investors for $3B US