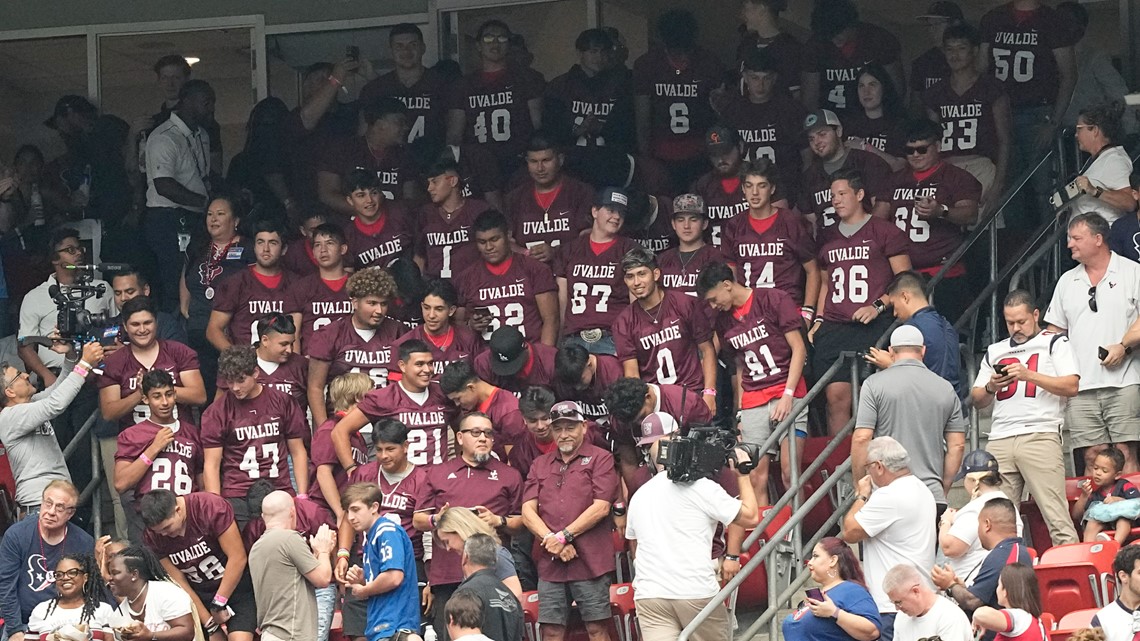 HOUSTON — The Houston Texans used their opener Sunday against Indianapolis to honor and remember the victims of the Uvalde Elementary school shooting.

The Texans hosted the Uvalde high school football team and wore “Uvalde Strong” decals on their helmets after 19 children and two teachers were killed in a shooting there in May.

The team joined with H-E-B to pay for the team to travel 280 miles from Uvalde and watch the game from a suite. It’s part of the team’s continuing support for the community after donating $400,000 to the Robb Elementary School memorial fund soon after the shooting.

Senior linebacker Justyn Rendon said it was the first time most of his teammates had ever attended an NFL game.

RELATED: ‘With your love, we are Uvalde Strong’ | Poteet feeds Uvalde community at football game, honors them with song

Uvalde coach Wade Miller said they want to do whatever they can to continue to honor those who lost their lives in the shooting.

“As far as the memory of 21, it’s important to us,” he said. “We all either lost somebody or knew somebody (that did) and … we’re like the rest of the world, we just want to help in some way. And hopefully, this helps.”

A video recognizing the team was shown on the video board in the stadium during a timeout in the first quarter Sunday. Uvalde players cheered as they were shown on the screens before a message that read: “We stand with Uvalde” flashed on the boards.

A contingent from the Texans including linebackers Christian Kirksey and Kamu Grugier-Hill visited Uvalde earlier this month and surprised the team with new uniforms provided by Nike during a team dinner. Miller has been overwhelmed by the support the Texans have given his team.

“It’s unbelievable,” he said. “You live out in a small southwest Texas town, and to know people care about us and when these guys find out that those guys want to know what their score is, it means the world.”

Rendon was asked if he was a Texans fan before the game. He paused and looked sheepish before answering.

“I’ll be totally honest, I’m 49ers fan,” he said. “But it’s just amazing and wonderful what the Texans have done for us and the whole city of Houston, too. We have a lot of fans on our team of a bunch of different teams — but we’re all Texans fans now.”

Both Miller and Rendon spoke about how sports has helped the city find a distraction and try to heal in the wake of such an unthinkable tragedy. Rendon takes special pride in wearing No. 21 on his jersey to remember the victims every time he takes the field.

“It means a lot, especially to the city of Uvalde just being able to run out on Friday nights and represent the 21 lives that were lost on May 24,” he said. “I’m representing them on and off the field.”

Highway of Tears monument to MMIWG a symbol of honour and hope, advocates say

NASA pushes back date for next Artemis I launch attempt