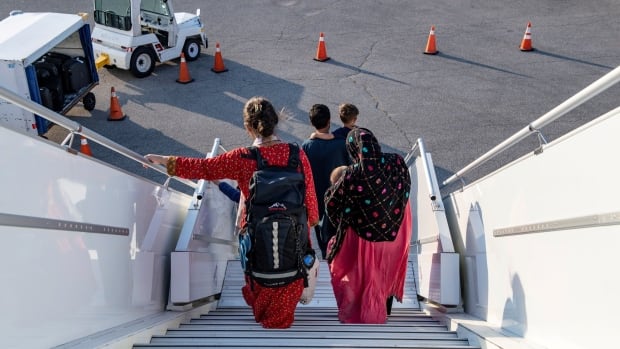 Ukrainian refugees are arriving in Canada. So where are the Afghans?


When the Taliban seized control of Afghanistan last fall, the federal government promised to help thousands of Afghans reach safety on Canadian soil.

But precious few have managed to make it that far — and as the visa applications of thousands of Ukrainian refugees are being expedited, some in Canada’s Afghan communities are wondering why.

“When we see how quickly things are moving with the response to the war in Ukraine, one has to wonder about priorities,” said Ariel Nasr, an Afghan Canadian filmmaker based in Montreal.

The Canadian government pledged to bring 40,000 Afghan refugees to Canada, including those it considers to be the most vulnerable — such as women, girls and members of Afghanistan’s LGBTQ community, in addition to those who worked with the Canadian Forces.

But since the government made that commitment last year, only 8,580 Afghan refugees have made it to Canada. In comparison, more than 7,000 Ukrainians have arrived since Jan. 1, according to Immigration, Refugees and Citizenship Canada.

“For somebody like me … with many friends and family and colleagues in Afghanistan, it’s incredibly frustrating and painful to see the lack of action,” Nasr said.

In a statement to CBC News, a spokesperson for Immigration, Refugees and Citizenship Canada said the Afghan initiative was a multi-year commitment hindered by outside factors.

“The number of factors that we do not fully control — such as the safe functioning of the Kabul airport — remain significant,” the statement read. “These are things that we are working on every day — there’s no lack of effort on the part of the Government of Canada.”

But those who work with refugees say more could be done to expedite the process for those trying to escape Afghanistan.

Warda Shazadi Meighen, a refugee and immigration lawyer based in Toronto, said that currently, prospective Afghan refugees need to be approved by the United Nations High Commissioner for Refugees (UNHCR) before the file is referred to Canada.

However, that’s now impossible to do from within Afghanistan — meaning people cannot apply unless they manage to escape the country on their own, she said.

“Let’s not put these refugees through that additional red tape, of having them go through these processes. We can waive it, and we’ve waived it before, in Syria,” she said.

“We took a look at the situation, and we said, ‘These people are obviously refugees. We don’t need them to go ahead and prove that they are refugees to the United Nations or to partner organizations,'” Meighen explained.

Meighen said something like this is already in effect for Ukrainians.

“Ukrainians fleeing are able to have temporary resident or temporary visas that are coupled with work permits so that they have a perch in Canada,” she said.

‘We could be doing more’

Because of the difficulty in getting that UNHCR referral, Nasr said it has been hard for families in Canada to get their families to join them.

“You cannot make a direct application to the Canadian government on behalf of somebody. They have to be referred by the UNHCR,” he said. “So that makes for a very uncertain process, even for those who have family here in Canada.”

Moreover, even being accepted as a refugee by the UNHCR doesn’t guarantee that someone acceptance to come to Canada. Nasr said a friend of his went through the UN process but was ultimately referred to Portugal, despite having family ready to accommodate him in Toronto.

“Although he was very clear about wanting to come to Canada, he wasn’t able to,” Nasr said.

Nasr said it has been frustrating to watch, especially after the the federal government’s vocal commitments.

“How do you then turn away from them when you say those things, when you make those promises?” he asked.

“By simply forgetting and moving on to the next crisis, we will leave a legacy of instability that will definitely come back to haunt us.”

Meighen said the government could offer Afghans temporary residence permits because “there’s a very good chance that they’ll be able to get out of Afghanistan on that permit,” enabling them to get to a third country to complete the process.

“We have to do everything we can to help,” she said, “which includes moving the mountains within bureaucracy.”