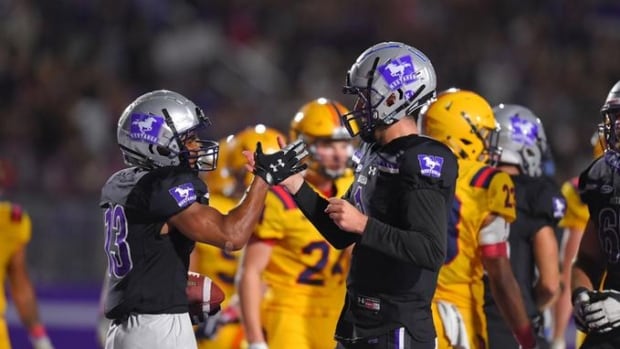 
After a limited activity the past two years because of the pandemic, Canadian university sport is back to full season schedules for this school year with more than 12,000 student-athletes returning to competition.

With fall sports underway and others starting soon, here are a few story lines to watch as teams strive to win their respective national championships.

London, Ont. will host the Vanier Cup for the first time as U Sports’ marquee event makes its way to the home of the eight-time winners and defending champion Western Mustangs.

“London is an outstanding sports community, and there’s a strong football culture here, so with the city and the university backing it, it will be exciting,” Western football head coach Greg Marshall told CBC Sports. “Laval has been a great host, and our planning can learn from their model, but it is nice that it moves around too.”

Université Laval has hosted the Vanier Cup seven times since 2009, while 41 of its 56 previous editions have been in Toronto.

Evan Hillock threw two touchdown passes to Griffin Campbell as the Western Mustangs beat the Saskatchewan Huskies 27-21 to win the Vanier Cup for an eighth time.

The Mustangs have had a solid start to the OUA season with wins over the Guelph Gryphons, Laurier Golden Hawks and the Queen’s Gaels. Still, despite the 3-0 start, there’s lots of work to be done over their remaining five regular-season games.

“We’re a work in progress, we’ve got a good team, but there is still a lot of football to be played,” he said. “We’re excited about it. Last year was about getting back to the field, and this year we don’t want to look too far down the road; we know what we have to do to get to the Vanier Cup.”

The UBC Thunderbirds could notch a few U Sports’ records in their pursuit of a national championship after finishing fourth at the tournament in 2021.

Senior forward Danielle Steer began the season 11 points away from the career scoring record in the Canada West conference and now finds herself just four off the mark.

U SPORTS WSOC: You’ve got to be kidding me, Katalin Tolnai!<br><br>A career season continues for her as she scored her 2nd goal of the match, 4th of the weekend and 7th of the season.<br><br>Most in form player in U SPORTS without a doubt.<br><br>UBC 2-1 MAC | HT<br><br> <a href=”https://t.co/0xKgPSLRgQ”>pic.twitter.com/0xKgPSLRgQ</a>

Meanwhile, Katalin Tolnai scored seven goals in three matches and is on pace to break the single-season goal-scoring record, set at 17 by Calgary Dinos forward Montana Leonard in 2021.

The uOttawa Gee-Gees, led by striker Cassandra Provost, have multiple championships they are pursuing, having also qualified for the FISU Americas Championship and January’s FISU University World Cup in China.

After winning the 2019 University World Cup, uOttawa gained automatic entry into the 2023 tournament but will compete in the FISU Americas qualifying tournament in Mexico in late October while also playing in the OUA.

“It’s going to be a challenge to manage two squads because we will be in Mexico while we’re playing in the OUA,” head coach Steve Johnson told CBC Sports. “We’re allowed to bring back some alumni, so that will help, but we’ll have to stay injury-free to make sure we don’t get too depleted.”

The two finalists from each of Ontario, Atlantic Canada and Western Canada will join host Université Laval Rouge et Or and the Quebec winner in November for the national championships.

Meanwhile, hockey and basketball get underway in October, and a non-Olympic year brings the focus back to campus for several coaches.

“It was a whirlwind last season and these last few years with Olympic centralization,” Ryan told CBC Sports. “My job is to get the best out of athletes, whether that is with the national team or at university, so it doesn’t change a lot.”

Although Dalhousie is not a favourite to win an AUS title in women’s hockey, other Olympic coaches, such as Canada Basketball assistant Carly Clarke, will look to lead the Toronto Metropolitan Bold to another undefeated season and a national championship in women’s basketball.

A new era starts today 💙💛<br><br>You can call us TMU Bold.<br>Our new mascot will be a falcon.<br><br>Today is all about our identity, but stay tuned for the launch of our new Bold logo in the weeks ahead.<a href=”https://twitter.com/hashtag/TMUbold?src=hash&amp;ref_src=twsrc%5Etfw”>#TMUbold</a> <a href=”https://t.co/GfbGQEWGWh”>pic.twitter.com/GfbGQEWGWh</a>

While the uOttawa women’s soccer program travels to China for the FISU University World Cup, other international competitions return as U Sports sends athletes to represent Canada at world university championships and the 2023 Winter World University Games, set for Lake Placid, N.Y., in January.

The Lake Placid Games mark a return for the multi-sport event after COVID-19 postponed and later forced the cancellation of the Lucerne 2021 Games. Using many of the venues from the 1980 Olympics, the 2023 Games feature 12 sports, including hockey, alpine skiing, curling, figure skating, ski jumping, snowboarding, freestyle skiing, short track, speed skating, and nordic events.