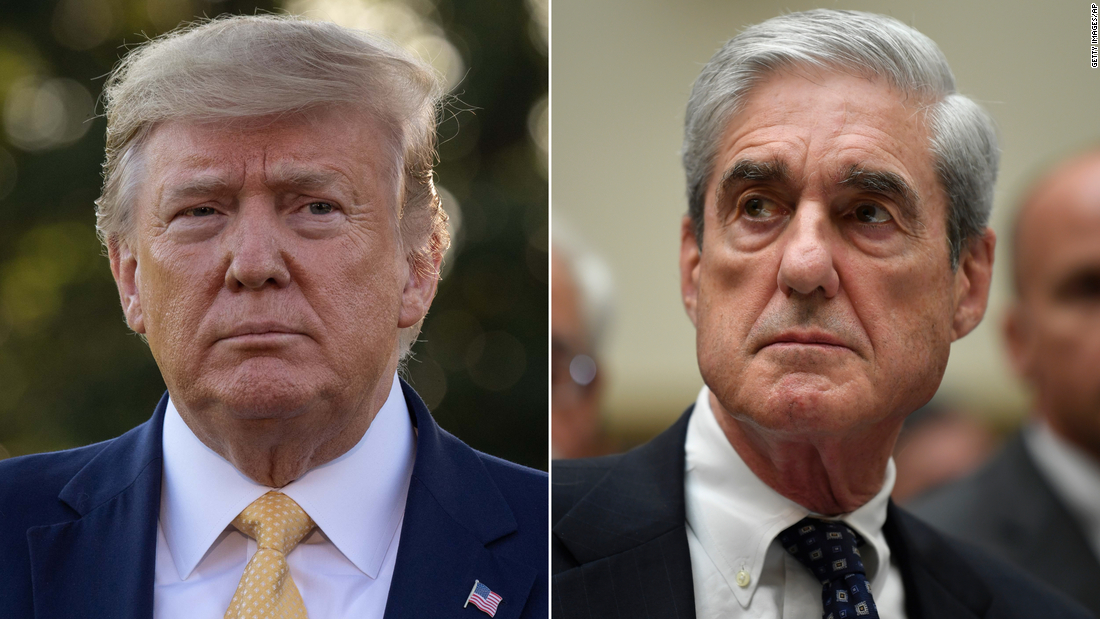 Trump’s been playing the pardon long game his entire presidency

“Why would I take it off the table?” Trump had said at the height of investigators’ pressure for witnesses in the Russia investigation, Mueller noted in his final report.

The special counsel looked closely at whether Trump was obstructing justice by dangling pardons for his former advisers Roger Stone, Paul Manafort and Michael Flynn — then all targets of the investigation. But those types of hints-in-progress wouldn’t come to fruition until Trump’s final weeks as President, long after Mueller’s work ended and the advisers sided with loyalism to Trump over the FBI and other investigators’ concerns of election security.

The pardons also help Trump make his case that the Mueller investigation should be discredited — even when its extensive findings about Russian interference, the Trump campaign’s receptiveness to it and Trump’s attempts to derail Mueller have held up under scrutiny.

“Mr. Manafort has endured years of unfair treatment and is one of the most prominent victims of what has been revealed to be perhaps the greatest witch hunt in American history,” the White House wrote on Wednesday in its clemency announcement for a man who hid millions of dollars from the US government and instead spent the money on ostrich and python pelt outerwear and karaoke systems.

And for Stone, who appeared to relish the limelight of his trial and booked an interview on Fox News Wednesday night, “Pardoning him will help to right the injustices he faced at the hands of the Mueller investigation.”

Almost two years ago, when Mueller’s investigation had ended, the special counsel’s office was tripped up in its final report from saying clearly the implications of what Trump had done — partly because of Justice Department policy that the President couldn’t be indicted but also because of the timing of politics and an inability to read Trump’s mind.

Yet Mueller documented extensively how much Trump had made known to advisers not to flip on him or on the campaign.

Trump’s personal counsel John Dowd had passed a message to Manafort and his deputy and co-defendant Rick Gates, for instance, that they should “sit tight” and would be “taken care of” when Mueller’s team pushed for plea deals and cooperation, as conservatives gathered a legal defense fund so the two could refuse and go to trial, according to the Mueller report and witness interview memos obtained by CNN and Buzzfeed. Gates flipped first, and Manafort later, after he was convicted by a jury on several financial fraud charges related to his years of lucrative political consulting in Ukraine. Manafort agreed to cooperate with Mueller, only to then lie to the grand jury and investigators, still blocking them from getting to the bottom of his ties to Russia in 2016. He served almost two years in prison before being released to home confinement because of the coronavirus.

Gates received commendations from a federal judge and prosecutors for telling the truth about his crimes and Manafort’s and the campaign’s actions. He has not received a pardon.

Trump’s tweets and public statements about this part of the Mueller probe were some of his most explicit: at a rally, cheering a judge who questioned Mueller’s intentions; writing on Twitter “very unfair!” and “I feel very badly” for his charged associates. “He refused to ‘break’—make up stories in order to get a ‘deal.’ Such respect for a brave man,” Trump tweeted following Manafort’s conviction at trial, before the former campaign manager signed a plea deal in a related case, admitting all his financial and lobbying crimes. Trump that week was reeling from the announcement that another former adviser, Michael Cohen, had become a federal cooperator and implicated the President in a campaign finance scheme. Cohen also has not received a pardon.

In the middle of the Mueller investigation, the President was also applauding Stone publicly for having the “guts” not to cooperate. Stone never did, and Mueller could never nail down what Trump and Stone talked about during the campaign, or if Stone was successful in his attempts to weaponize leaks of Democratic emails for Trump.

Another private lawyer for Trump, Rudy Giuliani, said during the Mueller probe that Trump would still have the pardon power after Mueller ended his work. Trump might use it, Giuliani said, if the President believed his convicted advisers had been treated unfairly.

Yet pardons weren’t ripe then, in the middle of the presidency.

It would have been a political third rail.

Manafort’s crimes had been sweeping, banking and tax swindles partly outside of politics and largely predating his work for Trump. Even a Trump supporter on his jury had voted to convict him.

Trump ally Sen. Lindsey Graham two years ago called a pardon for Manafort a “disaster for the President.”

And Stone’s crimes, also proven to a jury beyond a reasonable doubt, had first affected a Republican-held House of Representatives in 2017. “In our institutions of self-governance, courts of law or committee hearings, where people under oath have to testify, truth still matters,” Michael Marando, then a prosecutor in Trump’s own Justice Department, argued at Stone’s trial for his conviction.

Trump’s initial grant to commute Stone’s sentence this summer was critiqued even by the typically reticent Mueller, a longtime Republican bureaucrat.

“Russian efforts to interfere in our political system, and the essential question of whether those efforts involved the Trump campaign, required investigation … When a subject lies to investigators, it strikes at the core of the government’s efforts to find the truth and hold wrongdoers accountable,” the former special counsel wrote in a Washington Post op-ed following Stone’s commutation. “Stone was prosecuted and convicted because he committed federal crimes. He remains a convicted felon, and rightly so.”

Following the announcement of Manafort and Stone pardons Wednesday, the response has been somewhat more muted thus far. One Republican senator, Ben Sasse, has spoken up, calling it “rotten to the core” in a statement.

Andrew Weissmann, the chief prosecutor over Manafort’s case, wrote in a tweet Wednesday night, “The pardons from this President are what you would expect to get if you gave the pardon power to a mob boss.”

He also encouraged prosecutors to subpoena Manafort and Stone as witnesses for grand jury testimony about Trump.

Aaron Zelinsky, a leader on the trial team for Stone who became a congressional whistleblower alleging improper political interference in the case by Justice Department leaders who wanted to appease Trump, declined to comment through his lawyer. Mueller and his representatives didn’t respond to a request for comment.

It’s possible Trump’s pardon could still be investigated, especially if investigators have reason to believe bribes were offered or accepted. One pardon-bribery case is known to have been explored about the Trump era by prosecutors, though no charges have resulted, no pardon was given, and court records describing investigators’ steps didn’t implicate Trump or his close advisers.

Even if Trump’s pardons this week completed an attempt at obstruction by the President, any possible consequences may become past due with the end of the presidency. Justice Department leadership has already declined to prosecute the President for obstruction, and the Democratic-held House essentially put on ice Mueller-related impeachment proceedings in 2019. Plus, reviving those pursuits would raise thorny legal questions about executive power.

In the end, especially if it’s the last major statement on the subject, Trump’s pardon long game and embrace of his bully pulpit worked. Stone, Manafort, Flynn and others never fully divulged to the FBI or to the Mueller investigation their complete knowledge of the campaign’s willingness to accept Russian interference in the 2016 election or about other contacts with Russia. They’re still railing about the Deep State of the US government, while the presidential administration has repeatedly looked past reasons to be concerned about election interference, especially from Russia.

It was “coffee boy” Papadopoulos whose lawyer made the clearest argument in real time about what Trump was doing, evident even in the first days of his presidency.

“My point is this,” Papadopoulos’ lawyer continued, “The guy he worked for, who he wanted to see President of the United States, is telling everybody that the investigation these fellas talked to him about is fake. And that’s the mindset going in there” when Papadopoulos lied to the FBI.

This week, following his pardon, Papadopoulos thanked Trump for his clemency, and repeated his belief there was a “Russia hoax.”