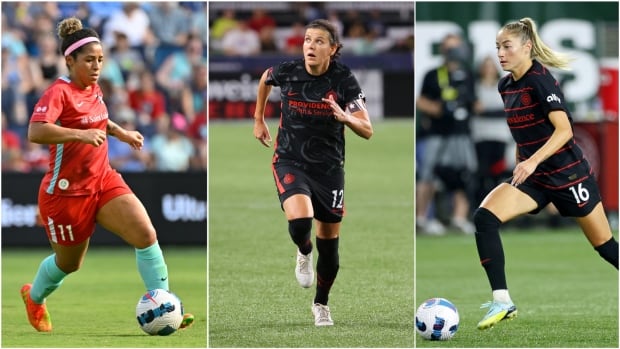 
When the 2022 National Women’s Soccer League playoffs kicked off on Oct. 15, members of the Canadian national team were front and centre.

All six clubs that qualified for the post-season had at least one player from Canada’s women’s team on their respective rosters. Most notable among them was San Diego Wave FC’s Kailen Sheridan who earlier this week was named the NWSL goalkeeper of the year, becoming the first Canadian to win one of the league’s major individual awards. Sheridan was also named to the NWSL Best XI for the second year in a row.

But Sheridan, a 27-year-old from Pickering, Ont., came up short in the semifinals of the playoffs last weekend, as San Diego lost a heartbreaking 2-1 decision to the Portland Thorns when the home side scored deep into injury time.

Even without Sheridan in the mix, Saturday’s NWSL Championship (8 p.m. ET) at Audi Field in Washington, D.C. will still have a distinct Canadian flavour to it as it pits the Portland Thorns, featuring Christine Sinclair and Janine Beckie, against fellow Olympic gold medallist Desiree Scott and the Kansas City Current.

Saturday’s final is a chance for Sinclair, a 39-year-old from Burnaby, B.C., to add more silverware to her already crowded trophy cabinet. The iconic Canadian captain will be shooting for her third NWSL Championship, having previously won it with Portland in 2013 and 2017.  Although she’s at an age where most players have retired, Sinclair showed that she still has plenty of life in her legs by scoring five goals for Portland this season, underlining how important the veteran striker still is for the Thorns.

Beckie, 28, found the going much tougher in 2022 after joining the Thorns from English side Manchester City in April, as she failed to register a goal in nine starts for Portland. Still, the talented forward has the quality, experience and versatility — she can also be deployed as a winger or fullback — that Portland coach and former Canadian international Rhian Wilkinson might find useful to take advantage of in Saturday’s championship game.

For Scott, a 35-year-old from Winnipeg, this year’s playoffs have been about redemption, for both her and her club. Kansas City’s expansion season in 2021 was by all measures a disaster. It registered just three wins in 24 regular season games with a league-high 14 losses, and had the worst attack and second-worst defence in the league en route to finishing in last place. This year, Kansas City turned things around by finishing fifth in the regular season before beating the Houston Dash on the road in the first round of the playoffs.

The veteran midfielder was suspended for that game but made amends with a standout performance for Kansas City in last week’s semifinals, playing the full 90 minutes in helping the Current upset top-seeded OL Reign, who featured fellow Canadians Quinn and Jordyn Huitema.

Beating Portland on Saturday would not only cap off an amazing turnaround by Kansas City, it would also allow Scott, a Canadian national team mainstay with 184 caps to her credit, to win her first NWSL Championship and earn some much-deserved and long overdue individual plaudits.

Those who play beside her will tell you all about Scott’s indomitable spirit on the pitch, which has led to her being called “The Destroyer.” It’s a sobriquet that she absolutely revels in, but at the same time it is misleading, as it suggests that it totally encompasses what Scott offers on the pitch. There’s more to her game than just being her team’s midfield enforcer.

“She’s never going to be, I think, a player like [Canadian midfielder] Quinn who hits diagonal balls on a dime, and she knows that. But what Desi is excellent at is playing forward. Her game is simple but highly effective, and she’s brilliant at the basics. The best players at the edge of the game are actually really good at that,” Bev Priestman told CBC Sports.

Having so many Canadians play in the playoffs this year is a major boon for Priestman, seeing as it’s a long NWSL off-season and that Canada will be playing important friendlies in the November and February international windows in preparation for next summer’s FIFA World Cup.

We have people playing in top leagues and on teams that are phenomenal.– Canada midfielder Sophie Schmidt on women’s national players

Midfielder Sophie Schmidt, one of three Canadians on the Houston Dash, believes this is a “golden era” of sorts with so many members of Canada’s women’s team involved in this year’s NWSL post-season.

“It’s so amazing to see Canadians in competitive environments on a consistent basis. It’s something that hasn’t always happened in the past and it’s a testament to our depth. We have people playing in top leagues and on teams that are phenomenal. That’s so beneficial for us and it’s exciting for supporters to have that ability to cheer Canadians on,” Schmidt told CBC Sports.

Saturday’s final between Kansas City and Portland is also a opportunity for the NWSL to put its best foot forward after being the focus of attention the past few weeks for all the wrong reasons.

Early this month, the U.S. Soccer Federation released “The Yates Report,” an official report documenting the findings and conclusions of its investigation, led by former U.S. Attorney General Sally Yates, into a series of scandals concerning abusive behaviour and sexual misconduct that rocked the NWSL last season.

The 173-page document revealed the depth of sexual and emotional abuse perpetrated by former NWSL coaches, and detailed how both league and U.S. Soccer Federation executives ignored reports from players about the abuse, which in some cases allowed the accused coaches to keep their jobs.

“There’s a lot of hurt going on at the moment around the league. It’s been happening for too long and has been left unchecked. It’s good that it’s finally coming out; it’s way too late. It took a lot of courage for the players who spoke out, and I’m glad they did. Change is slowly starting to happen which is important to move forward. But it’s shocking and disgusting what happened,” Schmidt said.

Host Andi Petrillo gets you caught up on the week that was in the world of soccer, featuring special guests and Canada Soccer’s right-back Richie Laryea.