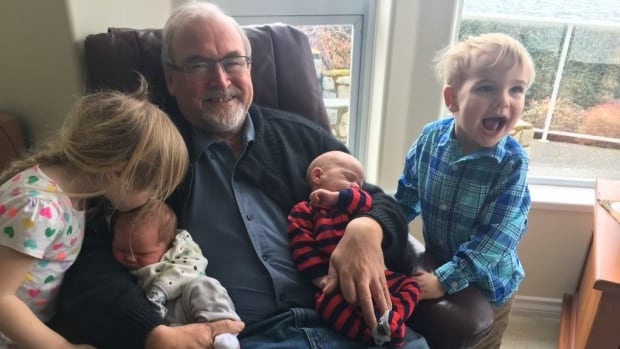 
Two days before he died, retired Edmonton doctor Chris Hoskins got up early enough to capture a stunning sunrise over the mountains in Canmore.

The 74-year-old posted the photo on his Facebook page and described it to a friend: “My favourite view.”

On Sept. 4, Hoskins set out with some family members to conquer Big Sister mountain — his favourite climb, his obituary would say later.

On the way down, he lost his footing and fell. Despite heroic rescue efforts, Hoskins died as a result of his injuries en route to hospital.

Hoskins’s death has sparked an outpouring of admiration and memories from friends, family, former colleagues and patients of the obstetrician and gynecologist who touched so many lives in a 40-year medical career.

“I have been surprised by the outpouring of so many people,” said his son, Dr. Ryan Hoskins. “I think most of the comments kind of revolve around his bedside manner and how he dealt with people.

“We calculated that he was involved with the delivery of probably over 18,000 babies in Edmonton.”

That’s roughly equal to the population of Stony Plain, Alta., or a baby for every seat in Rogers Place.

Ryan Hoskins remembers that when he was growing up, his dad was always on call during the week, no matter the time of day or night.

There were countless disrupted dinners and middle-of-the-night trips to the hospital to deliver babies.

“He felt there was no other job in the world that gave you the capacity to see so much of the world,” Ryan said.

“You could have a homeless person as a patient in the morning and the next patient could be an NHL hockey player’s wife.”

Ryan said his father treated all patients with the same compassion, patience and dignity.

Dr. John Marko was a mentor to Hoskins.

Marko was in charge of the residency program at the Royal Alexandra Hospital in Edmonton when Hoskins applied and was accepted after graduating from medical school in New Zealand, where he grew up.

“I think he was a very good listener,” Marko said. “When I think of Chris, I think of him listening very carefully to what you had to say. At the end of a talk, he could therefore ask the right question.”

“He was certainly one of the top specialists in his field here for many years,” Marko said. “I think the nurses particularly loved him very much because he was so pleasant to work with in the delivery room and the operating room.”

Marko, now 88, retired 22 years ago. He said it was sad that Hoskins died only four years after his 2018 retirement.

But Hoskins made the most of those four years. Ryan said his parents travelled to India, South America, Antarctica and Greenland. Over the past six months Hoskins had completed 30 different hikes, his son said.

‘He was doing what he loved best’

Linda Soluk, 60, was Hoskins’s patient for most of her adult life. He became her doctor when she was 17.

“He looked just like one of the guys from ZZ Top with the beard and long, long hair,” Soluk recalled.

She said she asked him if he was really a doctor. In response, he led her to his office and showed her photos of his wife and kids as he assured her, “We’re going to get along great.”

Hoskins delivered Soluk’s first son. Soluk remembers the doctor and her husband standing outside the delivery room talking and laughing.

“The nurse kept going out the door and saying, ‘OK, like, the baby’s coming. The baby’s coming,'” Soluk said. “Finally I hollered and said, ‘Get your asses in here, both of you, and let’s get this done!'”

“That’s a one in a million doctor like that,” Soluk said. “You’ll never get those kinds of doctors again.”

She had to have an emergency caesarean during the first birth after her water broke at home and the baby turned. Volkerink said her life was in the doctor’s hands.

“I remember him saying to me, ‘Joan, you have to sign here. We have to go right away. It’s your life and the child’s life.'”

Her son was delivered safely.

“I’ve been forever grateful,” Volkerink said. “And when I saw that he had passed away, it broke my heart. I thought this never should have happened to this kind, gentle man.

“Mind you, he was doing what he loved best.”

Hoskins is survived by his wife Beverley, four children, their spouses and 10 grandchildren, and an untold number of colleagues, patients and friends.

A celebration of life will be held in Edmonton on Oct. 14.