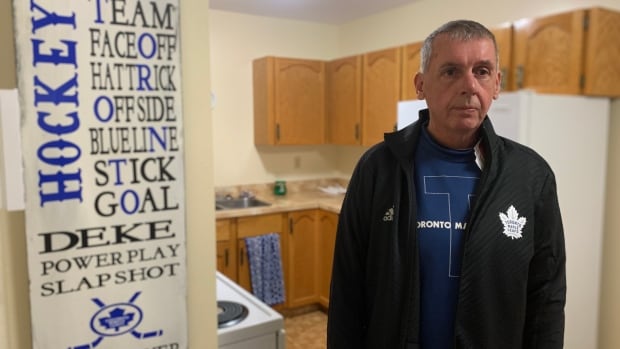 
Brian (Smokey) Osmond stands proudly in his kitchen, sporting blue and white from head to toe.

Before he speaks he chokes up.

To Osmond, it means the world.

“I lost everything I had. I had everything in it. My basement was done up as a rec room. I had it painted blue and I had a bar. I had almost everything that the Leafs had — jerseys on the walls.”

It was a lifetime of collecting Leafs memorabilia lost in one swoop as Fiona took Osmond’s home, and almost his life in September.

He recovered only two pieces from his collection in the days after the storm, sifting through rubble and cleaning up debris.

“The more I talk about it, the worse it gets,” said Osmond.

‘It’ll always have a special meaning’

Button received about 18 boxes from the Leafs on Monday morning, filling his office with what he initially thought was a joke.

The boxes are packed with sweaters, hats, coats, blankets and other swag to be distributed throughout the community but also two very personalized items from Leafs president and NHL Hall of Famer Brendan Shanahan.

“The first thing I hauled out was a jersey with my name on it and a signature on it. When I looked at the signature … I said ‘It looks like Brendan Shanahan to me.’ There was an envelope there, and when I opened it, it [said] ‘From the Desk of Brendan Shanahan,” said Button.

“It made my day, as a Leafs fan, of course. But it’s touching, for the moment, just to see how far this has gone and how people are reaching out from all over.”

In his letter to Button, Shanahan wrote, “I want you to know we are thinking about you and the people of Port aux Basques.”

Button said Shanahan told him the Maple Leafs are also making a $10,000 donation to the Canadian Red Cross for Fiona relief.

He said the gesture meant a lot to him as a Leafs fan but that was secondary to the organization simply taking the time to help.

“That jersey will be going in a shadowbox case, and the letter as well, in my rec room,” he said, noting he has been a collector since his was a teenager and owns about 200 team jerseys.

“Forever and a day, it’ll always have a special meaning.”