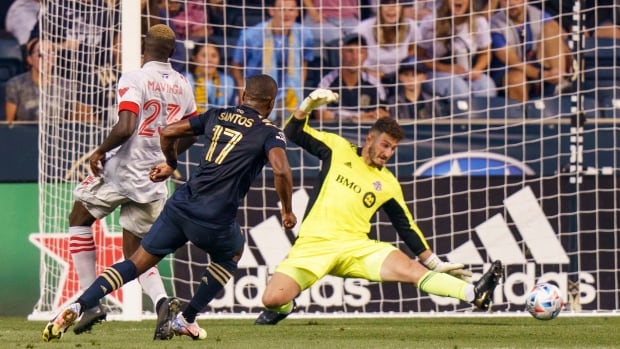 
Toronto FC reverted to its early-season malaise Wednesday, putting on a dismal performance in a 3-0 loss to the Philadelphia Union in MLS play.

After going unbeaten in five games (2-0-3) under interim coach Javier Perez, Toronto (3-9-5) was repeatedly punished for the porous defence that cost Chris Armas his job July 4 after a 1-8-2 start. Philadelphia (7-4-7) had its way with the visitors, carving open the backline again and again.

TFC, which came into the game having given up a league-worst 33 goals, has now conceded three or more goals five times this season. Toronto hits the midway point of the season looking like a team still in need of considerable help.

Toronto generated almost no offence and its defence was vulnerable all night.

Jakob Glesnes, Daniel Gazdag and Sergio Santos scored for Philadelphia, which led 3-0 after 36 minutes and looked at times like it wanted the game more than TFC.

Philadelphia, which had won just once in its previous seven outings (1-2-4), snapped a three-game winless streak (0-1-2). It also extended its unbeaten streak to eight matches in all competitions at Subaru Park, where it has not lost since May 1.

It was the first game with general admission at Stade Saputo since the beginning of the COVID-19 pandemic.

The first half could only be described as cautious. With both teams mirroring one another with a 3-4-1-2 formation and looking to create chances early by getting in behind defenders, neither side was willing to give an inch.

Montreal had the lion’s share of scoring chances but the half’s best opportunity belonged to Atlanta’s Moreno at the 10-minute mark. Played in by a little flick from Martinez, Moreno forced and excellent left-footed stop from CF Montreal ‘keeper James Pantemis at point-blank range.

Less than a minute later, Ahmed Hamdi went down with an apparent lower-body injury and was replaced by Samuel Piette.