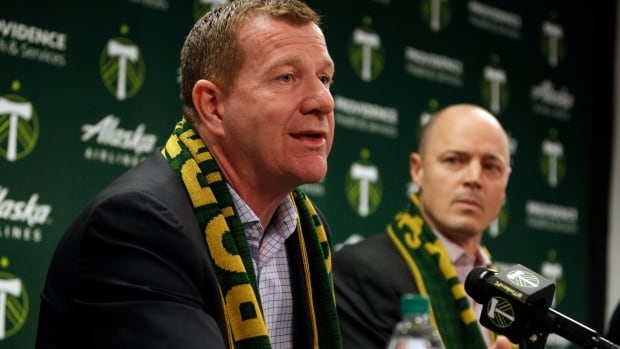 
The Portland Thorns have dismissed a pair of team executives in the wake of an investigation into misconduct in the National Women’s Soccer League.

The Thorns’ move Wednesday came a day after owner Merritt Paulson removed himself from a decision-making role with the team.

Five of 10 NWSL coaches either were fired or stepped down last season amid allegations of misconduct. Among them was former Thorns and North Carolina Courage coach Paul Riley, who was accused by former players Mana Shim and Sinead Farrelly of sexual coercion and harassment dating back a decade. Riley has denied the allegations.

Yates’ report focused on three former coaches: Riley, Louisville’s Christy Holly and Chicago’s Rory Dames. Not only did the investigation find misconduct by all three, it also said their teams did not fully cooperate.

Thorns executives Gavin Wilkinson and Mike Golub were both relived of their duties Wednesday. The two were also dismissed from Paulson’s other team, Major League Soccer’s Portland Timbers.

Riley was coach of the Thorns in 2014 and 2015. His alleged misconduct was investigated by the team, which opted not to renew his contract but did not publicly reveal the reason for the decision.

Yates wrote that Thorns management “interfered with our access to relevant witnesses and raised specious legal arguments in an attempt to impede our use of relevant documents.” The investigation also found inappropriate workplace comments made by team executives.

Riley went on to coach the Western New York Flash, which subsequently became the North Carolina Courage. Riley was with the Courage until September 2021 when allegations of misconduct were published in The Athletic.

‘Action must be taken’

The Courage issued a statement saying the team is committed to player safety and will take appropriate action on the recommendations in the report.

“The North Carolina Courage stand in full support of the players impacted by abusive behavior across our league. We acknowledge our responsibility to continuously examine our organization and our role within the systemic problems in our sport, as described in the Yates report,” the statement said. “The details and events are deeply disturbing, and action must be taken to ensure these types of occurrences are never again allowed to happen.”

Dames, a former coach of the Red Stars, allegedly abused players verbally and created a hostile work environment. He resigned at the end of last season.

Whisler has announced he is removing himself from a governance role on the NWSL board and giving control of the franchise to its executive team.

“The past few months have been a time of deep humility, contrition, and reflection for me. I have always strived to ensure that everyone hired in our environment is of high character and shares our positive values. But we have not always succeeded. For that, I am sorry,” Whisler said in a statement.

The investigative report also recounted an April 2021 encounter between then-Louisville coach Holly and a player, Erin Simon, who now plays in Europe. Holly invited her to watch game film with him and allegedly told her that for every pass she messed up, he was going to touch her. Simon told investigators Holly “pushed his hands down her pants and up her shirt.”

‘We failed our locker room’

The club fired Holly last season for cause after looking into the allegations against him.

“We commend Erin for her bravery in coming forward as part of U.S. Soccer’s investigation. And while our former coach was terminated within 24 hours of us being alerted to the behaviour, we know that wasn’t enough and that we failed our locker room by creating a space where this behaviour could occur,” O’Connor said in a statement Wednesday.

He added: “We are not the same club that we were in August of 2021. We now owe it to our players and community to prove it.”

The NWSL and its players association are also investigating alleged misconduct in the league.