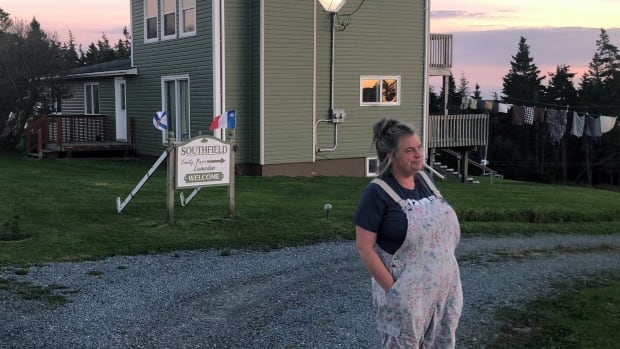 AJ’s Pub, one of three restaurants in Canso on Nova Scotia’s northeast mainland, already has a Cyclone 4M pizza on its menu.

Its namesake is the Ukraine-built rocket that boosters hope will blast off from a spaceport being built near the community by Stephen Matier, president and CEO of the startup Maritime Launch Services (MLS).

“In analyzing locations around North America, this location really fit that bill,” said Matier in an interview with CBC Radio’s John Chipman.

The rockets won’t be carrying astronauts. Satellites, mostly for communications, are the planned payload. Canso, a roughly three-and-a-half hour drive from Halifax, offers an ideal launch point for satellites destined for low-Earth orbit over the Atlantic Ocean, Matier said.

But in the idyllic, seaside community largely known for its fishery, two challenges stand in the project’s way: a vocal opposition dampening excitement over the potential for new jobs and tourist dollars, and the need for an estimated $180 million more in funding.

While MLS says it has worked with people in the community, answering their questions and providing scientific details about the project, opponents maintain the site was chosen without adequate consultation or community input.

“I know it’s a boring, small town. Nothing ever happens here,” said Marie Lumsden, a leader of Action Against the Canso Spaceport, a local group pushing back against the development.

“But here we are fighting a rocket launch facility.”

The project was first announced in March 2017, and submissions provided by MLS to the province for environmental assessment were approved in 2019. In August this year, the Nova Scotia government gave the green light for construction on Crown land leased from the province. However, neither the provincial or federal governments have approved the MLS site for operation, including rocket launches.

Matier, a former NASA engineering contractor from New Mexico, anticipates the first commercial launches could take off by the end of 2024. Once the site is fully online, Matier says it could see up to eight rocket launches per year.

Cashing in on the ‘space economy’

Economists valued the “space economy” at more than $400 billion US last year, and predict the industry could reach $1 trillion US by 2040. Last year saw a record number of successful rocket launches — 133 out of 144 attempts. This isn’t the only proposal of its kind. A handful of commercial spaceports have already been built in the United States.

For a community with a shrinking economy and population — the town of Canso was dissolved and the community absorbed into the Municipality of the District of Guysborough in 2012 — the promise of a new industry offers hope to many.

MLS estimates the site would create 50 permanent jobs across various specialties, from skilled trades to scientists to fire fighters. Another 100 people are expected to work at the site during launches. Meanwhile, a local construction company spent $350,000 on a new excavator and believes it could hire two new employees for the project.

Matier, the MLS founder pegs initial investment needed for the spaceport at $200 million — half to build a fully functional spaceport and the other half to develop and manufacture the rocket. MLS announced in May 2021 it had secured $10.5 million from Toronto investment bank PowerOne Capital Markets.

He says the company has raised closer to $20 million so far, but didn’t elaborate further. MLS’s stock is trading around $0.17 per share as of Oct. 25.

Next year, he hopes to launch a smaller, Canadian-made rocket, an exercise that would see the company build a more scaled-down version of the spaceport before construction on the larger version would continue.

“The phase one launch, that’s essentially a concrete pad or back building, portable power controller, public access. There’s not a lot to it from on the ground,” Matier said.

“We’re not building the Taj Mahal hoping they will come. We’re also not going to build every stitch of the facility to its, you know, nth-degree, Taj Mahal look before first launch. We’re going to be operational from a safe environmental perspective and be able to execute that launch.”

While the spaceport’s future is unknown, the community remains divided over the project.

Canso has a population of 739, according to 2016 numbers from Statistics Canada. How many residents actually oppose Matier’s project is unclear. Polling by Narrative Research for MLS in 2021 found 82 per cent of respondents favoured the project if it followed environmental and safety regulations.

In the same poll, four per cent of respondents said their opinion wouldn’t change even if the project followed environmental and safety regulations. Matier says that suggests there’s no changing the minds of a minority of people opposed to the project.

A petition by the municipality that was tabled in the Nova Scotia legislature by Lloyd Hines, the then-MLA for the region, listed 743 signatures in favour of the project, but opponents say many of those polled reside outside the Canso area. The petition included names of people from Alberta and Ohio.

An opposing petition circulated by Lumsden and her team gathered 410 signatures, all of which listed Canso as their location, representing 38 per cent of adults in the region.

Lumsden says many in the community have raised concerns about the safety and environmental impact of storing chemicals, and repeated rocket launches in the area. Lumsden, who lives on the eastern edge of Canso, says her home is 2.9 kilometres from the launch site.

“It’s almost a religious thing. It’s like your soul is in the land,” she said. “I see the potential for this piece of land to be completely destroyed for absolutely nothing.”

Elizabeth Marshall, a Mi’kmaw elder from Eskasoni First Nation, likens the efforts to build a spaceport to modern-day colonialism.

“Those of us that are near the water, that have lived there for generations, we recognize how delicate the ecosystem is here. It is so delicate, it took millions of years to create what we see out here,” she said.

Others who oppose the project worry about how a spaceport could affect the lobster fishery and home values, and question whether their home insurance would cover them in the event of a catastrophic accident.

Matier says the company is taking steps to mitigate potential environmental impacts, found in the provincially approved environmental assessment. Rocket propellant will be shipped and stored in approved containers, and MLS says it will try to limit its launches during the fishing season.

Spectators will also be banned within a two-kilometre zone around the launch site. Transport Canada says it continues to work with MLS to determine safe distances from launches.

If the site is approved to launch rockets, Matier says they will fly south, over the Atlantic Ocean.

An official with Nova Scotia Environment and Climate Change noted that eight provincial and eight federal agencies assisted the ministry in assessing the spaceport proposal, and several will continue to play a role in regulating the project if it’s approved for operation.

Matier said the fact that both he and Yuzhnoye, the Ukrainian company behind Cyclone 4M, have decades of experience in aerospace, is a testament to MLS’s commitment.

“How we operate the site comes straight out of my human spaceflight operation of hazardous test facilities in the space shuttle program. I’m bringing that to this site and implementing that here,” he said.

Despite the opposition, many in the community are excited about the opportunities the project could bring.

“I’m excited. I can’t wait. And it’s not just for my business, I think it’d be great for the town, because the town’s dying,” said Val Rhynold, owner of Val’s Crafts and Delights, a cafe and craft store in Canso. While business went well during the summer, she says it’s slowed since school started.

Sheri Parker, a member of the MLS Community Liaison Committee, is also optimistic given the challenges Canso faces.

Sask. woman recovering from addiction fears for her sister as drug crisis sweeps through province

'Doggone it': Pups banned from cemetery after urinating on plots