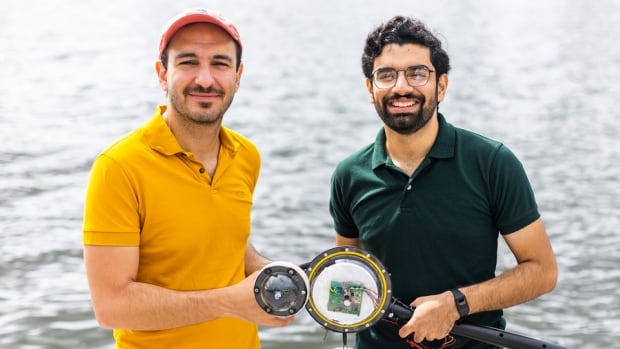 This new underwater camera is powered by sound

As It Happens6:24Scientists develop a wireless underwater camera that’s powered by sound

What if you could photograph the deepest depths of the sea using a camera powered only by the ocean’s soundscape?

That’s the end goal of a new prototype device developed by scientists at the Massachusetts Institute of Technology (MIT) — a wireless, battery-free underwater camera that runs on sound waves.

“The way it works is that, underwater, actually, you have a lot of sound,” Fadel Adib, an associate professor of electrical engineering and computer science at MIT, told As It Happens host Nil Köksal.

“The sound comes from the waves, sounds of animals and so on and so forth. You also have ships. And all of these cause underwater sound.”

Adib and his colleagues authored a paper outlining their prototype, published this week in the journal Nature Communications. They say it can take colour photos in dark environments, and is 100,000 times more energy-efficient than other undersea cameras.

So much ocean left to explore

The ocean makes up about 70 per cent of the planet’s surface, but marine experts estimate that somewhere between 80 to 95 per cent remains unexplored.

Adib blames that on the limitations of existing underwater cameras. In order to keep them running for a significant period of time, you have to keep them powered by tethering them to a research vessel, or sending a ship to recharge their batteries.

“And so what we ended up doing to overcome this is that we built the first underwater camera that needs no battery, and it can self-power and it can also get data and transmit it back to us,” he said.

Guadalupe Bribiesca-Contreras, a postdoctoral researcher at the U.K.’s Natural History Museum who has used underwater photography to discover new deepsea life, called the findings “so exciting.”

“Time-lapse cameras have been used to understand more about life in the deepsea, but a challenge has been how long the batteries last,” she told As It Happens in an email.

“Having a battery-free camera could allow us to better understand the deepsea ecosystems, as well as monitor these.”

The prototype underwater camera is made up of two domes and a cylinder. One dome houses the image sensor, and the other houses the flash.

The cylinder is covered in a specialized material that allows the camera to harness sound waves and convert them into electrical energy, which it uses to power up. Once powered, the camera emits a low-powered flash that allows it to capture images. It then transmits those images to a remote receiver.

So far, the researchers have tested the device only in freshwater environments, and they supplied the sound needed to power the device from nearby on the shore. The next phase of research, Adib said, will involve testing it in the ocean off the coast of Cape Cod, Mass., and harnessing sounds from the sea itself.

“In the future, you can imagine using the existing sounds [such as] dolphins to be able to power them up. But that’s going to require some level of research before we do that,” Adib said.

Once they’ve perfected the technology, Adib says it could have major implications for ocean exploration and climate change research.

“We want to be able to use them to monitor, for example, underwater currents, because these are highly related to what impacts the climate,” he said. “Or even underwater corals, seeing how they are being impacted by climate change and how potentially intervention to mitigate climate change is helping them recover.”

It could also be useful in aquaculture, also known as seafood farming.

“We can deploy our cameras in these offshore aquaculture farms and use them for monitoring the fish so that we can monitor their health, react and optimize their feeding and so on and so forth,” Adib said. “It’s a fast growing food sector, and it is very important for the world food security over the next few decades.”

And maybe one day, he says, it could even help us understand another vastly underexplored frontier.

The research was funded, in part, by the U.S. Office of Naval Research, the Sloan Research Fellowship, the National Science Foundation, the MIT Media Lab and the Doherty Chair in Ocean Utilization.