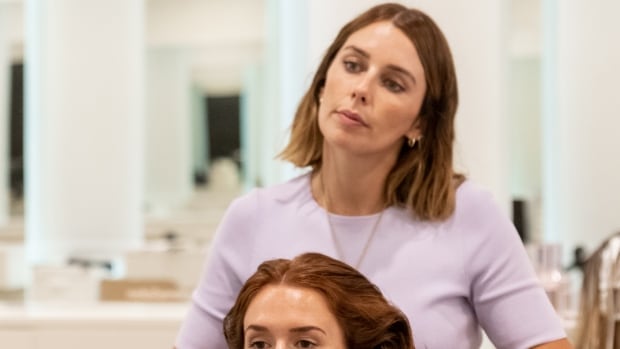 
Our planet is changing. So is our journalism. This weekly newsletter is part of a CBC News initiative entitled “Our Changing Planet” to show and explain the effects of climate change. Keep up with the latest news on our Climate and Environment page.

Sign up here to get this newsletter in your inbox every Thursday.

As the effects of climate change have become more serious, many people without much political or financial influence have asked themselves what they can do to address the situation.

Paloma Rose Garcia, who owns a hair salon in Sydney, Australia, was one such person. What she discovered was that merely talking about global warming with customers could have a positive effect — and that realization has led her to create climate change education and communication workshops for others in her profession.

“As I was on my own personal journey with climate and understanding more about climate change and the effects that it’s having all around us, it just became a conversation that came up with guests,” Garcia told What On Earth.

Many of these customers have been with her for years and have developed a deep relationship with Garcia, creating a sense of trust between them.

“I had a guest yesterday and she was laughing, [saying] that it’s literally her longest and happiest relationship, the relationship she has with me,” Garcia said.

Garcia attributes this to hairdressers being natural “relationship-builders” and the salon being a casual and safe environment to discuss life’s challenges — including climate change.

“It can start off as something very small. It’s as simple as, ‘Oh my god, isn’t this weather just crazy? It’s really sad to see the effects of climate change.’ It’s a simple little comment or remark like that that can turn into a bigger conversation,” Garcia said.

According to the Australian Museum, the number of days in Australia where temperatures have broken heat records has doubled in the past 50 years. In recent years, climate extremes such as heat waves, drought and wildfires have ravaged the country.

“Those fires … it was scary. My kids were having nosebleeds everyday from school — they were coming home with bloody noses for about two months,” Garcia said.

Experiences such as these motivated Garcia to bridge the gap between the inside of her salon and what was going on outside. She maintains that these discussions are always one on one and client-led. If a customer demonstrates curiosity about a specific aspect, that opens up the floor to explore further.

One thing Garcia often suggests to clients is not banking with institutions that still invest in the fossil fuel industry. It’s something she says individuals rarely consider in the broader journey to net zero emissions.

“When I have that conversation with guests, their eyes literally fall out of their head,” Garcia said. She explained that once she tells her clients that banks invest billions in the fossil fuel industry every year, they’re more compelled to act.

As a member of Sustainable Salons Australia, she’s making every effort to minimize her salon’s footprint, which includes reducing water consumption and using a power supplier that provides emissions-free electricity.

Her positive interactions with customers spurred her to encourage the hairdressers employed in her salon to have similar conversations. Since then, she’s run three climate workshops, with hundreds of hairdressers.

The workshops, led by both a climate scientist and social scientist, discuss the science of climate change and how to hold a constructive conversation on the topic.

Her personal narrative is that she has two kids trying to make the world a better place for the sake of their health and well-being. Garcia also has a friend who is working on building an environmentally friendly and energy-efficient home for their family.

She said these stories resonate with clients. Her next step is to roll out workshops across Australia. Garcia hopes to target the major cities, as part of a broader plan to educate and empower hairdressers across the country.

“[Climate change] is all over the news. It’s happening,” said Garcia. “But it just seemed like this big, dark elephant in the room that no one knew how to handle. But when I share with [people] information around banking, their electrical supplier, being green…. It’s tangible changes that they can do at home that make a big difference.”

Natalie Stechyson’s story on the negative impacts of floristry, on the occasion of Queen Elizabeth’s funeral, drew a number of reader responses.

“Wonderful piece, so agree. And the flowers on the Queen’s coffin were arranged using oak branches as support, not florist plastic foam.”

“I was at a pick-your-own raspberry farm, talking to the farmer about her bees.  She mentioned that flowers for the flower industry have been manipulated over the years so they grow without pollen, because customers don’t want pollen detritus on their tables, etc. Obviously, this is very bad for the bees. I thought that was very interesting — something I’d never considered before.”

“Hi, just read the article on the flower industry. Coincidentally, this afternoon I reached out to a potted plant supplier that does take back the plastic plant pots and asked them if we could organize and send back plant pots from all the garden centres in our town. So many of them end up in landfill.”

CBC News recently launched a dedicated climate page, which can be found here.

Also, check out our radio show and podcast. In the aftermath of storms and hurricanes, communities can rush to rebuild. This week on What On Earth, we hear why one group is calling for a rethink, urging communities to slow down, redesign for extreme weather or relocate. What On Earth now airs on Sundays at 11 a.m. ET, 11:30 a.m. in Newfoundland and Labrador. Subscribe on your favourite podcast app or hear it on demand at CBC Listen.

Canada’s landscape is blessed with treasures, but one of the underappreciated ones is our volcanoes. Steve Grasby, a senior research scientist with the Geological Survey of Canada, says we actually have hundreds of them — and they could play a big role in the country’s transition to a greener economy.

Beneath the mountains near Whistler, B.C., for example, old volcanoes are heating underground reservoirs of water up to 260 C — temperatures scalding enough to generate power. Grasby and other researchers from across Canada are exploring the geothermal energy potential of Mount Meager and neighbouring Mount Cayley, two literal hot spots in a ring of volcanoes north of Vancouver.

Tapping these mountains for steam to produce power isn’t new, but national emissions targets, advanced drilling technology and federal and provincial incentives could make this the moment such projects take off. Mount Meager is poised to be one of the first such sites in the country to harness geothermal heat for power. Original wells on the mountain drilled more than four decades ago — and long abandoned — are now in the hands of a new company, which says the mountain could potentially power as many as 100,000 homes.

In what seemed like a scene out of a science fiction movie, NASA slammed a spacecraft into a distant asteroid on Monday to see whether it could nudge its orbit — part of an effort to test a way to protect Earth from potential future threats.

The collision happened 11.3 million kilometres away, with the spacecraft — the Double Asteroid Redirection Test (DART) — plowing into the rock at 22,500 km/h.

The asteroid, Dimorphos, wasn’t a threat to our planet, and there are no known ones headed our way for at least the next 100 years. However, space agencies like NASA want to be prepared should there ever be a threat.

The goal wasn’t to knock Dimorphos (seen in the photo above) out of orbit but rather to change its 12-hour orbit around a larger asteroid, Didymos, by 10 minutes.

So why target a binary asteroid system rather than a single asteroid to see whether you can change its orbit around the sun?

“A binary system was perfect for this test,” said Mallory DeCoster, a senior scientist at Johns Hopkins University’s Applied Physics Laboratory in Maryland and part of the DART Impact Modeling Working Group.

For one, the size of Dimorphos — about 164 metres across — is perfect to illustrate whether this would be an effective way of deflecting asteroids that pose a threat to Earth. (Didymos is 780 metres across.)

“But then the other piece is, if we were to impact a single asteroid, in order to characterize if we changed its orbit, we would have to wait until it completed its orbit around the sun, which could take many, many years.”

The other advantage is that the binary system is relatively close to us, astronomically speaking, at just 11 million kilometres away.

NASA’s Center for Near-Earth Object Studies says more than 90 per cent of near-Earth objects (NEOs) bigger than one kilometre in diameter have already been discovered. But that doesn’t mean we’re out of the woods when it comes to Potentially Hazardous Asteroids (PHAs).

In 2013, the Chelyabinsk asteroid — which was roughly 20 metres in diameter— exploded over parts of Russia, injuring about 1,000 people and serving as a reminder of how even a small asteroid can be dangerous.

Earth basically flies through a shooting gallery in space. There are small chunks of debris that burn up in our atmosphere as meteors; bigger ones, like Chelyabinsk; and then even bigger ones that can be catastrophic — all left over from the formation of our solar system.

That’s why space agencies like NASA and the European Space Agency have been trying to develop ways to deflect or nudge a PHA so that its orbit changes and poses no threat to Earth.

Mike Daly, a professor at York University’s Lassonde School of Engineering in Toronto and a co-investigator on DART, said one of the most popular concepts is deflecting asteroids before they become a real threat. But that means we need to have advance warning that one is headed our way.

“The simplest method is the one that DART is doing, which is essentially to take a spacecraft at high speed and crash it into the asteroid and use that transfer of the energy from the spacecraft to the asteroid to move it along,” he said.

As this was the first test of a form of planetary defence, scientists are eagerly anticipating not only the impact of the event itself but also what they will learn from it — and, most importantly, what this may mean for protecting Earth in the future.

“We’re really the first generation that can protect ourselves from these potentially catastrophic impacts,” York University’s Daly said.

“Fortunately, the really catastrophic ones don’t happen very often, but they could happen, and never before have we been able to change our fate.”