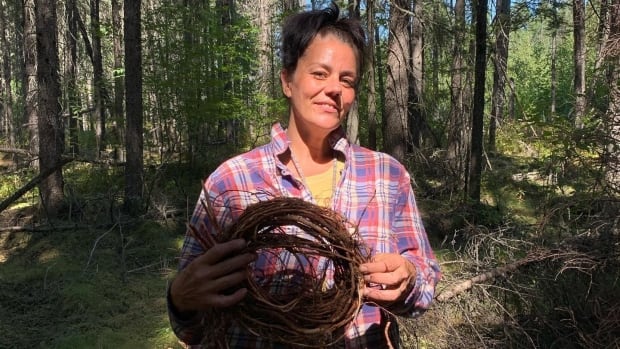 
Nestled in a sunny grove of black spruce trees, with a crispness hanging in the early fall morning air, Helen Pelletier is out collecting spruce roots, before it’s too late in the season.

Before Pelletier starts harvesting the materials she needs, the Anishinaabe basket maker offers semaa — the Anishinaabemowin word for tobacco, a sacred medicine — for her ancestors and the living world around her.

She engages with the land regularly in her home community of Fort William First Nation, on Robinson Superior Treaty land, and always does so with the same care and protocols.

“There’s a trade with me and the trees. I try and give back as much as possible,” she said.

Describing what that means to her, Pelletier said, “it’s many things. It’s sharing knowledge, receiving knowledge, respecting what I have to teach you … the relationship with the trees and what they offer us, and what we have to offer in return.

“That’s what governance is. It’s not just about someone telling one person what to do.”

Pelletier said her actions demonstrate resilience and the continuation of Anishinaabe governance processes — something that Indigenous people have been saying for generations that Canadian governments have tried to destroy through violence and colonial policies that tried to disrupt Indigenous people’s relationships to the land and each other.

Pelletier scans the ground in front of her. Green moss abounds, with patches of medicine like Labrador tea and bearberry scattered throughout.

“I feel like this is a good spot. There’s a lot of spagma moss. It grows for thousands of years and when we dig it up, I’m going to get what I need and then place it back so it can keep growing.”

She peels back the moss and pulls up a root easily stretching six metres in length. Rubbing the root against the bark of the tree, Pelletier cleans the dirt and skin off the root before coiling it into a tight ball, to be weaved into future baskets.

Pelletier is a knowledge holder and does everything she can to pass this on to others.

“This is old knowledge. When we gather, we should gather respectfully,” she said. “For me, this knowledge is just so important and we don’t have enough basket makers.”

When I’m harvesting stuff, it’s done in a sustainable way. I’m not just butchering trees. We have this relationship.– Helen Pelletier

Pelletier’s parents were her first teachers about the land, educating her about having respect for the land and never taking more than was needed. Since then, other local knowledge keepers have taught her to treat the roots and the bark “like gold.”

“When I’m harvesting stuff, it’s done in a sustainable way. I’m not just butchering trees. We have this relationship.”

She’s spent a lot of time thinking about Indigenous ways of governance, as the Seven Generations Education Institute’s curriculum developer for Anishinaabe Gikendaasowin — a concept that means “our knowledge and way of knowing.”

“It’s about how we live our responsibilities that have been passed down to us by our ancestors so we can survive and live in reciprocal relationships with our environment,” Yerxa said.

These responsibilities, she added, are found in Anishinaabe language and stories.

“It’s to guide on how we behave and interact with everything else. In essence, these are our laws.”

Failing to recognize these ways as the laws and governance practices they are, or mislabelling them as just culture, undermines Indigenous nationhood and sovereignty, Yerxa said.

“What settler colonialism has done over time and continues to attempt to do is erase and compartmentalize Indigenous governance by de-politicizing these laws, and practices and relationships.”

Back in the bush, Pelletier gathers all of her supplies. It’s been a good day of harvesting, Pelletier says, as she’s gathered enough to complete projects for the entire winter.

She has one more harvesting trip planned for this fall, bringing a group of young people to pass on her knowledge about spruce roots, basket making and Anishinaabe governance.

“I really really encourage people to develop a relationship with the land. If they don’t know how, it’s as easy as walking into the bush for five minutes and just being mindful of what they see.”

After that last trip, Pelletier will put her harvesting on hold for the long, snowy winter in northern Ontario.

But then she’ll be back out, practising her ways of life and teaching others so it doesn’t get lost or forgotten.