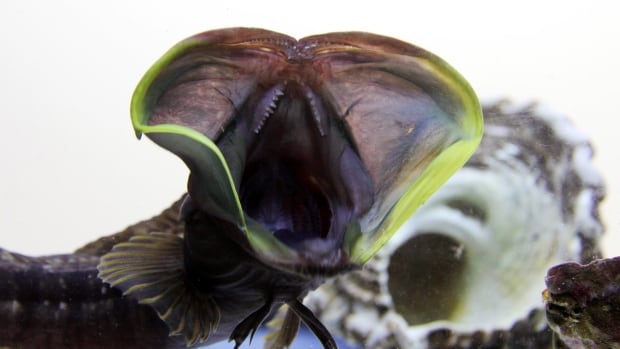 As It Happens5:57These colourful fish use their massive mouths to protect their love dens

When male sarcastic fringeheads get into a conflict, the spoils of war tend to go to the fish with the biggest mouth.

Sometimes, the colourful reef-dwellers will fight over territory, smashing their gaping maws together in what looks like a violent kissing contest.

But most of the time, if one fish’s lips are big enough to strike fear into his challenger’s heart, that’s enough to prevent a physical altercation.

“They tend to live in rocky crevices or sometimes empty shells, and to protect these shelters and to retain them, they will often give this agonistic display by opening their mouth and trying to show the width and size of their mouth,” University of California San Diego biologist Zach Skelton told As It Happens host Nil Köksal.

“The point of the display, [as far as] we can determine, is to deter physical combat. So it’s basically showing, ‘Hey, I’m really big. Don’t mess with me.'”

Skelton co-authored a study about the male mouth-offs, which was published this month in the journal Ecology.

Sarcastic fringeheads, or Neoclinus blanchardi, are small and feisty saltwater fish with bluish-purple scales, buggy eyes and bright pink and yellow lips. They’re native to the Pacific ocean, and live mostly off the coast of California.

When they get aggressive with each other — which they often do — they open their unusually wide jaws, revealing two rows of pointy teeth.

“They’re very colourful, very charismatic,” Skelton said. “But then they do this pretty creepy, as you might imagine, display — although they kind of look like clowns when they do it, in my opinion.”

More than one writer has compared them to the demogorgon, the Dungeons and Dragons monster featured on Netflix’s Stranger Things. Fortunately, they’re only about 18 centimetres long.

“If sarcastic fringeheads got to be like six feet long, like, nobody would go in the water,” University of California marine biologist Milton Love, who was not involved with the research, told CBC.

The way fringeheads use their big mouths isn’t news to scientists, but Skelton and his team wanted to get to the bottom of the behaviour. After all, there are a number of reasons the male of a species might put on a big show, including competition for mates.

In the fringeheads’ case, it appears to be all about protecting their territory. And reproduction is a big part of that.

The males take up residence in empty shells, crevices, or even trash like empty bottles. Those little hidey-holes are where they court their mates.

When a female has chosen a male to father her offspring, she will lay her eggs inside the male’s nest. Then the males will fertilize and guard them.

No shell means no opportunity to mate.

To study the phenomenon, the researchers first scuba dived off the coast of California and observed the fringeheads in their natural environment.

They learned that female fringeheads rarely, if ever, made the mouth display. And the males never do it toward females, suggesting it has nothing to do with attracting a mate. Instead, it appears to exists purely in the realm of male-on-male conflict.

“So we’re not quite sure how it works between the sexes, and that’s a future area of study we’d like to observe,” Skelton said.

What’s more, when other sea creatures came too close to the male fringeheads’ nests, they’d usually charge and bite the intruders, reserving the mouth games for members of their own species.

The second step of the study was to observe the fringeheads in a lab setting. The scientists would put two males in a tank with a single shell to see what happened.

“Not every individual would display. Some are more timid and would hide inside the shells,” Skelton said. “Some were very aggressive and the fights could sometimes get to be too much in which we’d have to separate the individuals.”

When a fight did break out, it would usually culminate in one fish biting the other. And most of the time, the biggest fish was the victor.

‘The spunkiest little fish on the planet’

Love, who works at the University of California’s Marine Science Institute in Santa Barbara, says he’s not surprised by the findings. He’d always assumed the mouth displays were a territorial thing. But he says he’s glad someone went to the work of observing the phenomenon in detail.

He also says he’s happy the study is bringing attention to big-mouthed creatures, which are one of his favourite fish.

“What I like about them, in particular, is that they are just the spunkiest little fish on the planet,” he said.

While they’ll often avoid fighting with each other with their mouth contests, they have a tendency to bite anyone else that comes too close, he said, including fishers and divers. One even bit Love’s finger once.

“Their behaviour of just, like, not taking crap from anybody, it’s just great,” Love said. “I just really appreciate all of that.”

Skelton, who is similarly awed by the fringeheads, says there’s a lot left to learn about them.

“Most people find it scary,” he said. “But I think it’s pretty interesting.”