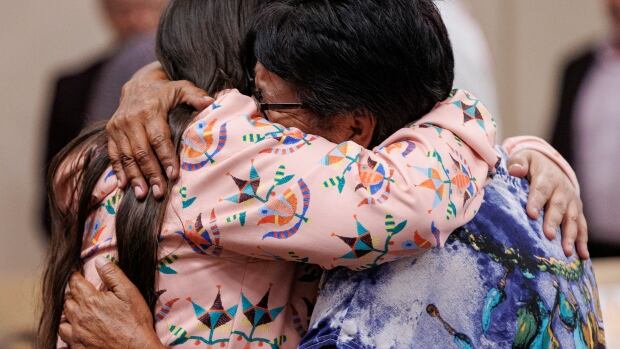 ‘There has to be purpose from this tragedy,’ says Indigenous leader on Sask. stabbings

It’s been 11 days since a deadly stabbing spree terrorized James Smith Cree Nation in Saskatchewan, but some Indigenous leaders say the process of healing is just getting started.

“The magnitude of the trauma and the disbelief, I guess — it’s only just begun,” said Heather Bear, fourth vice-chief with the Federation of Sovereign Indigenous Nations.

“I don’t think we’ve fully realized the full impact of what this tragedy has caused,” she told The Current guest host Nahlah Ayed.

There were 10 people killed and 18 others wounded during the Sept. 4 attacks in the James Smith Cree Nation area and the nearby village of Weldon, Sask.

The main suspects, Damien and Myles Sanderson, died in the days after the attacks. Damien was found dead on Sept. 5, and Myles died a couple of days later, shortly after he was arrested.

Outpouring of support for James Smith Cree Nation after tragedy

As James Smith Cree Nation holds funerals for the victims of the horrific stabbings, people from surrounding Saskatchewan communities are coming together to support them during their time of need.

Bear said the victims and the perpetrators had family ties to James Smith Cree Nation — and their relatives are feeling the impact of the stabbings “10 times over, 12 times over.”

“I see there’s a lot of emotion here when you look at the close ties, and the full impact hasn’t been realized,” she said.

But Bear says she is also witnessing “amazing strength and courage” in the community.

“Although they’re enduring a lot — and they will endure a lot — I know just by their strength and what I see and how they’re coping, down the road they’re going to be OK,” she said.

The path to healing is a “long, tough, hard one,” according to Bear, but “a tragedy like this should have never happened” — and it should be prevented from happening again, both in James Smith Cree Nation and the rest of Canada.

“I believe that we are on the cusp of great change because of the tragedy at James Smith,” she said. “But there has to be purpose from this tragedy — and I think that’s what everyone believes.”

According to Parole Board documents, prime suspect Myles Sanderson grew up with physical abuse and domestic violence.

He also started using cocaine at age 14 before turning to crystal meth, according to the documents.

Chief Robert Head of Peter Chapman First Nation, one of three bands that make up James Smith Cree Nation, told CBC News he’s all too familiar with the way some turn to alcohol and drugs to numb the pain of the past.

“I would say upwards of 80 per cent of us have relatives who are from Indian residential school experiences,” he told CBC News.

“It’s a really big problem because they inherited all of that trauma.”

“We can’t wait — look at what’s happening to our people,” she said.

Calls are growing for dedicated First Nations police services after a series of stabbing murders in Saksatchewan led to the deaths of 10 people, including nine members of the James Smith Cree Nation.

One way to come out of this tragedy appropriately, according to Bear, is by improving policing within communities like James Smith First Nation.

“Policing is a huge gap,” she said. “We need that. We need those boots on the ground in our communities.”

The key, according to Cree lawyer Eleanore Sunchild, is to have “community police” who can build relationships with each First Nation, not just respond to crisis situations.

“We actually need police in the community who know the community, who know their issues and define what they need in terms of safety so that we don’t have to rely on the RCMP who are 40 minutes away,” she told Ayed.

Bear said policing is an essential service — and there needs to be “community mobilization, prevention and awareness, and some sort of training” around community policing.

“We have strategies,” she said. “We have, you know, frameworks already. They just need to be funded.”