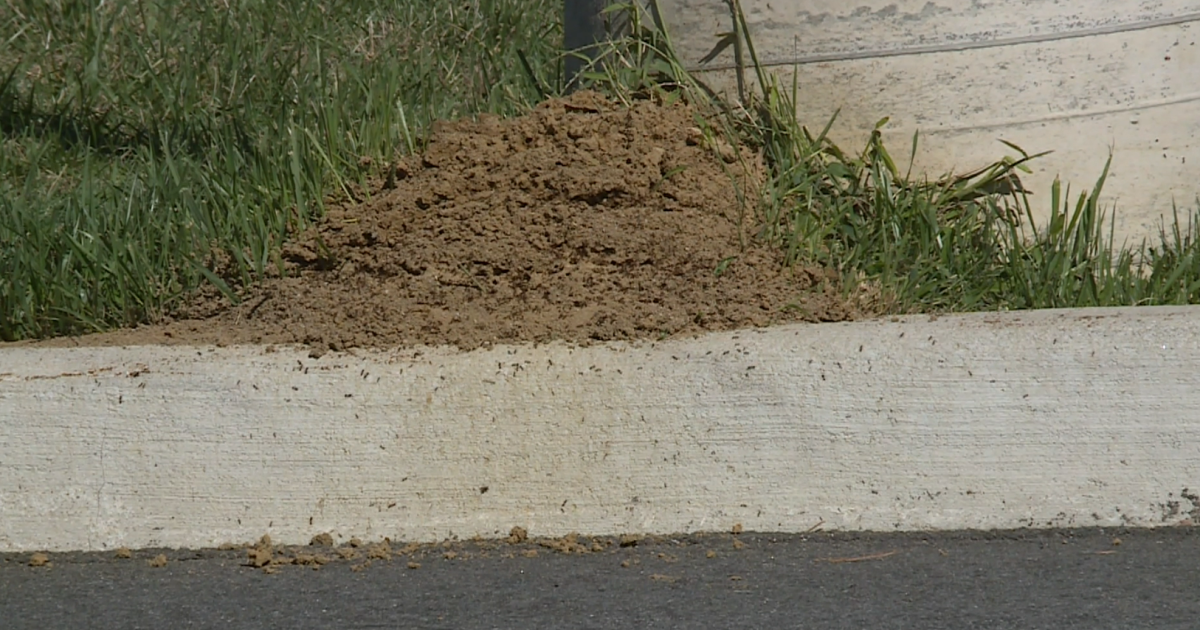 
PRINCE GEORGE COUNTY, Va. — A Prince George County man reached out to CBS 6 to alert the community after he discovered something he had not seen in decades — imported fire ant colonies.

“I saw that one hill right here and I was looking at it and I said, ‘You got to be kidding me.’,” recalled Mike Schulte when he saw three of the distinct mounds he recognized from his time in Florida and North Carolina on one corner and even more up the road. “I said, ‘I got to tell somebody about this, you know?’ Because these things are very dangerous.”

Schulte said the insects can pose a risk to children and small animals because they will swarm anyone that disturbs their mounds, which look like piles of dirt, and knows firsthand what that feels like as he struck a mound as a teenager when mowing a lawn in Florida.

“They get on you real fast and then, after it’s about maybe about 50 to 100 of them on you they start biting,” said Schulte. “I was cutting grass one time when I was near a canal of water and I stepped in and then the lawn mower hit a nest, sprayed them all over me and I had to just dive into the canal just because once they get on you, they just bite everywhere.”

Fire Ants in Virginia: “Their habit is they are very aggressive.”

Joining Schulte in wanting to get the word out about the invasive species is the state agency tasked with stopping its spread in the Commonwealth — the Office of Plant Industry Services, part of the Virginia Department of Agriculture and Consumer Services (VDACS).

Program Manager David Gianino said the imported fire ant was brought from its native region of South America into the southern United States (such as Florida, Georgia, and Texas) through the movement of nursery stock or soil. The movement of nursery stock from those states is what brought them to Virginia, with the first confirmed sighting in 1989.

“Once we found out that it was here in Virginia, we started quickly trying to treat for eradication and those eradication efforts weren’t really successful. They were able to reproduce and spread,” said Gianino, who added the insects could be spread by human movement and natural migration. “Fire ants have been marching northward, just naturally. They do have mating flights in which the mound itself can produce enough queens where they need to get forced out and then they will go out into the environment and establish new mounds.”

Gianino said the fire ant colonies have become so established in several cities and counties that eradication is no longer an option and they are now considered quarantine zones where restrictions are in place to prevent human activity from spreading them further.

“What we do is we work with businesses to establish compliance agreements and set up a set of management strategies and requirements in order to make sure that if they’re moving plants out of the quarantine — trees, logs, farming equipment — that at all is free of fire ants and free of any sort of loose soil because they can harbor eggs of the fire ant,” added Gianino. “We do surveys along the edge and the border of those counties and we monitor for fire ants…If we do find mounds, what we do outside the quarantine is we do treat them with a baited fire ant pesticide…And they’re pretty effective at eradicating mounds.”

However, Gianino said they do face challenges dealing with the mounds and they continue to spread.

“Like for instance, on farmland, there’s no products that are registered that we can use on farmland. And then if areas are grazing animals, we have to be very careful about what we can and can’t apply pesticide-wise,” said Gianino. There’s other areas which have access issues, private property, which we’ve worked with the homeowner or the landowner to try and get on and do treatments.”

Gianino said they have noticed the fire ant populations moving into more northern counties, including Dinwiddie and Sussex. He said that several of those counties will be added to the quarantine zones at the end of the year.

As for the mounds that Schulte found, Gianino said it is being treated as a suspected colony of imported fire ants and a sample has already been taken for testing.

“We’ll take a sample of fire ants and get it submitted to the Virginia Tech Extension Entomologist who identifies it to the fire ant level and then gets it confirmed to the with the United States Department of Agriculture, the national identification services, that way we are 100% positive that it is fire ants,” said Gianino, who added there are three types of fire ant it could be (black, red, or hybrid). “If it is fire ants in Prince George, then it would be the first find in that county, for sure, which would render us very active mode to try and eradicate that mountain because it’s one of our most northern known populations.”

Gianino said fire ants have also been reported in Chesterfield County, but have been small enough that they have been eradicated. He added the Richmond area used to be considered farthest north the insects could move, but climate change could change that.

“The way that the weather, the soil differences, and the overall temperature itself, over the winter, does not lend itself to the survivability of fire ants,” said Gianino. “Now, as climate change kind of shifts everything much more north and everything becomes much more warmer we are waiting to see what the total maximum range is and it’s possible that it could go beyond Richmond…The other thing that can impact the spreadability of fire ants, too, is flooding events. Because, when water comes through, let’s say through a hurricane or through flooding events, fire ants are very good at rafting — meaning that they all kind of gather together and they float along the water as a unit. And so, that is a very quick and, unfortunately, an easy way for fire ants not only to be displaced but to be moved long distances. And so, during hurricane seasons, which are more frequent because of an impact of climate change, you can actually have more spread that way as well.”

What to Do if you Suspect a Mound

Gianino said if you live inside the quarantine zone, the department does not provide treatments but there are products available.

“But, be careful, be safe when you’re around them. Because, oftentimes you won’t know if you’ll have either an allergic reaction or anaphylactic response unless something major happens,” added Gianino.

“Please report that to us, report it to your local extension agent. Because, we are interested, we are tracking it and if it’s outside the quarantine, it’s an opportunity that we have to get in there and try and take out those mounds and eradicate that small, isolated population and any chance that we get to rapidly respond to a new invested site we’re going to be out there as soon as we can,” said Gianino.