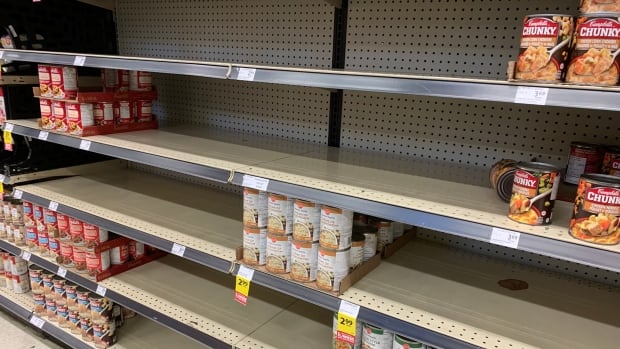 
Miss something this week? Don’t panic. CBC’s Marketplace rounds up the consumer and health news you need.

Want this in your inbox? Get the Marketplace newsletter every Friday.

Are grocery stores really running out of food? Here’s what you need to know

We’ve all seen the headlines.

But just how much should we be worrying about the long-term security of our food supply?

Turns out there are three big factors making it harder than usual to get some food products on shelves across the country: winter weather, the Omicron variant of the coronavirus and the trucker vaccine mandate.

Industry experts say that Canada’s food supply is nowhere close to collapse — despite dramatic photos of empty shelves you may see on social media. So rest easy, you may not always find what you’re looking for at the grocery store right now, but this, too, shall pass. Read more

As a convoy of protesters heads toward Ottawa, the COVID-19 vaccine mandate for cross-border truck drivers has been blamed for empty grocery store shelves. But experts say there are numerous factors, including extreme weather, contributing to reduced supply. 1:59

She rented a truck on a perfectly sunny day. Why was she billed for more than $5,500 in hail damage?

Keli Chick wants answers after a one-day rental from Enterprise Rent-A-Car devolved into a year-long saga over a damage claim worth more than $5,500.

She says she drove her rental truck from Dawson Creek, B.C., to Red Deer, Alta., on a sunny day at the end of 2020, but six weeks later, was on the receiving end of a letter from Enterprise stating she was on the hook for $5,578 for hail damage.

“I thought, ‘This cannot be possible,'” she said

Chick later sent Enterprise a link to a local TV weather report that said there had been clear skies during her rental period, which was later confirmed by a meteorologist at Environment and Climate Change Canada contacted by Go Public.

But it didn’t make a difference. It was only after Go Public requested an interview with Enterprise that the company dropped its claim against Chick. Read more

It’s not always true that owning your own home protects you from the threat of losing it, which is something Wendy Thomas, who has owned a condominium in the same Toronto building for the last 42 years, is learning the hard way.

Thomas and hundreds of others in her building were recently given 15 days to pay between $30,000 and $42,000 in special assessment fees after the condo’s board determined the building was in desperate need of repairs.

If residents weren’t able to pay, a lien was slapped on their unit, which under Ontario’s Condominiums Act allows the condo corporation to sell the unit to recover the amount owing. It also means those residents can’t vote in future board elections.

“How could they do it? We’re in the middle of a pandemic,” Thomas said through tears. “For most people, this is their retirement home. They were looking for a peaceful time.”

Many condo owners in the building are seniors on fixed incomes who now worry that if they can’t pay their share of the fees, they’ll risk losing their homes.

Thomas said she’s had to come out of retirement and return to her customer service job to afford the payments. Unable to secure a loan from her bank, she said she had no choice but to take out a high-interest loan from a private lender. Read more

What else is going on?

Feeling anxious and lonely as the pandemic drags on? You’re not alone
Nearly one in four respondents to CAMH survey said they needed — but could not access — mental health support last year.

This Carrément raincoat has been recalled for being an entanglement hazard
Immediately remove the drawstrings from both sides of the raincoat waistband, cutting and removing all cords, to eliminate the hazard.

Do you get regular phone calls claiming there’s a package being detained for you by Canadian authorities? Or demanding you owe money in unpaid taxes? Maybe someone claiming you’ve got a virus and need tech support? If so, we want to hear from you! Send us your name and phone number and we may get in touch with you. Email us at marketplace@cbc.ca.

Have your batteries leaked or stopped working before you expected? We want to hear from you! Send us your photos and tell us more at marketplace@cbc.ca.

Watch this week’s episode of Marketplace and catch up on past episodes anytime on CBC Gem.

Petal teacher back home after battling COVID-19 for 139 days