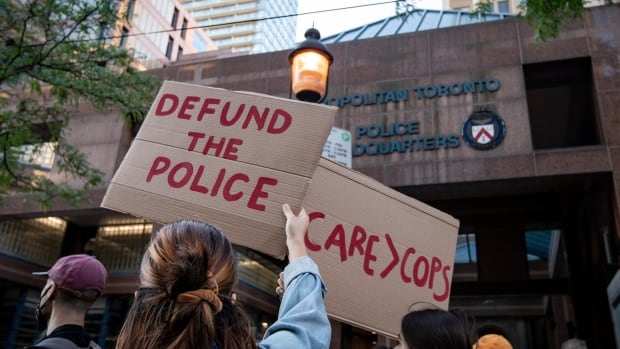 The police budget is one of Toronto’s largest expenses. Here’s what you need to know about it


Few financial issues in Toronto have received as much attention in recent years as the amount of money the city spends on policing.

Ever since the murder of George Floyd by a Minneapolis police officer in May 2020, calls to reduce the more than $1 billion in funding for the Toronto Police Service (TPS) have become a central part of the city’s annual budget debate.

The last city council, led by Mayor John Tory, rejected those calls twice, instead voting to maintain or increase the amount of money going to TPS despite efforts by some councillors to force a reduction.

With Toronto voters heading to the polls on Oct. 24, the issue is on the minds of many. And with the city facing an $857- million budget gap, police spending will continue to be central to that debate.

How big is Toronto’s police budget?

For a number of years, spending on police has consistently been the single largest expense in the city’s annual operating budget, although this year it was supplanted by the Toronto Transit Commission.

In other Canadian cities, police spending is taking up 11 per cent of the total operating budget in Montreal in 2022, 21 per cent in Vancouver, 17.5 per cent in Calgary, 9.3 per cent in Ottawa and around 18 per cent in Hamilton.

In its 2022 budget submission, TPS noted that the police budget has decreased as a percentage of the part of the city budget that’s funded by taxpayer dollars over the past 10 years, shrinking from 26 per cent in 2011 to 23 per cent in 2021, and that this year’s increase was less than the 2021 inflation rate of 4.4 per cent.

How is the money spent?

Of the money budgeted for Toronto police operations in 2022, 90 per cent is going to salaries, benefits, overtime and other pay-related expenses for the service’s approximately 4,988 uniform officers and 2,400 civilian staff members, according to the TPS 2022 budget request.

TPS said the budget increase would allow the service to focus, among other things, on community policing, the Vision Zero road safety program, mental health training and the prevention and investigation of hate crimes.

The force said it would also re-introduce an investigative team to address serious crime trends and strengthen relationships with communities by continuing to implement police reform.

While TPS provided a line-by-line breakdown of its budget online, critics say it doesn’t include enough detail for the public to evaluate how well the money is being spent.

Akwasi Owusu-Bempah, an assistant professor of sociology at the University of Toronto, told CBC the public has a right to know more about how police deploy resources.

“How much of their time and our money is going to drug law enforcement, is going to policing guns and gangs versus is going to community policing efforts?” he said.

“We don’t have a good sense of what the police do with the money we give them  … and, more importantly, what the results of that policing are.”

Should the police be defunded and detasked?

Groups like Black Lives Matter argue much of the money that currently goes to police would be better spent on community initiatives.

They argue too many people from marginalized communities are harmed by police interactions, and that officers are ill-equipped to provide traffic services, prevent violent crimes and respond to calls involving mental health, homelessness and drug overdoses.

The deaths of Regis Korchinski-Paquet, Ejaz Choudry and D’Andre Campbell highlight what can go wrong when police respond to people experiencing mental health crises, and an expansive Toronto police report this summer showed Black, Indigenous and other diverse groups are disproportionately affected by use of force and strip searches by officers. Those are just some of the latest incidents that have damaged the trust between police and the communities they serve.

On Monday, a group of around 20 activists representing a coalition of community groups held a demonstration outside a debate featuring five Toronto mayoral candidates, calling on them to defund the police if elected.

Cole said it means taking public resources currently set aside for policing and punishment and redirecting them to prevention initiatives that focus on the root causes of violence, crime and poverty, including housing, education, mental health, and other supports.

“We don’t need the billion-dollar police budget if we’re taking care of one another,” Cole said.

John Sewell, a member of the Toronto Police Accountability Coalition, said allowing community agencies, not police officers, to respond to mental health calls and those involving unhoused people and youth would cost less money and lead to better results.

The city is running a three-year Toronto Community Crisis Service (TCCS) pilot project where mobile teams made up of crisis workers respond to some mental health calls in four areas of the city. But Sewell said initiatives like these need to be sped up.

Jon Reid, president of the Toronto Police Association, the union representing officers, said calls to defund the police are “shortsighted” and that the vast majority of police interactions with the public are resolved “to everybody’s satisfaction” without the use of force.

Reid argued that TPS needs more funding, not less, because the service is understaffed and its officers are overworked.

According to TPS, the service had 568 fewer uniform officers and 160 more civilian staff members last year than in 2010. At the same time, police have had to serve a larger population per officer, homicides and gun violence have increased and response times are getting longer.

“If we were to reduce the number of police officers even further, it’s going to be unsafe, in my humble opinion, to the communities at large [and] unsafe for our officers,” Reid said.

Where do mayoral candidates stand?

Soon after Monday’s municipal election, TPS will make its budget request for 2023, and the next mayor and council will be responsible for accepting, amending or rejecting it.

A big increase could be hard for some to swallow for some councillors depending on whether city has closed this year’s $857-million budget gap.

“It’s not just taking money out of police services. It’s moving it towards mental health care so that we can get people off the streets and into supported communities, bringing down the cost of hospitalization, incarceration,” Brown said.

In a statement to CBC Toronto, Penalosa said his approach to the police budget would be to start with a “zero budget,” evaluate what’s needed and only fund what is justified.

“There are many additional responsibilities the police currently have for which they are untrained, ill suited, and frankly don’t want on their plate. I want to work with the police to find better solutions to these areas of work,” the statement said.

As an example, Penalosa said he would expand the TCCS pilot.

“I want a safe city, where marginalized and racialized communities are respected, and force is not misused in encounters involving police. I’m not convinced that defunding the police will achieve that result,” she said in a statement.

Tory has made clear he will not reduce police spending.

“We’ve kept the increase to 1.7 per cent in the fastest growing city in North America,” Tory said at Monday’s debate, referring to the average annual increase in the police budget over his eight years as mayor.

“We’ve managed to finance neighbourhood policing and a host of other police modernizations and reforms while constraining the budget. And I think that’s the way to do it.”