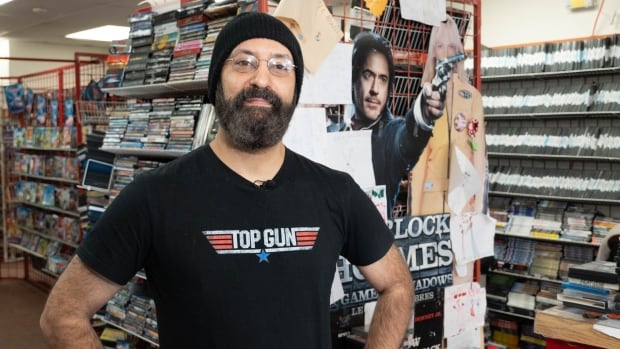 The movie rental store lives — and it’s not going anywhere


It may be a business model of a bygone era, but cinephiles can still physically browse through aisles of fantastic flicks at one of the last movie rental stores in Ottawa.

Tucked away in a small and unassuming strip mall on Kilborn Avenue in Ottawa’s south end, movie rental buffs with a keen eye will find Movies n’ Stuff.

Inside is like taking a step back in time: 12,000 movie titles (mostly DVDs) are stacked along walls. A large figurine of Darth Vader looms over customers as they browse. There’s a cardboard cutout of Uma Thurman from Kill Bill.

As you make your rental purchase, you can buy some candy and microwave popcorn.

It’s a business Peter Thompson carries on with pride. He inherited the store from his parents five years ago, who ran it for 30 years before that.

Thompson, who previously worked in sales, nearly shut it down.

“There was a pretty good backlash from people around here that said ‘Look, don’t do it, don’t do it. You know what you’re doing. Trust us, you can do it,'” he said.

“My wife and I talked about it and we decided to do it, and it was a good decision.”

In a world of streaming and free content online, most customers have abandoned in-person visits to video rental stores. Many have stopped coming in over the last 15 years, said Thompson.

Still, there are enough loyal customers, about a couple hundred a week, that walk through the door to keep Movies n’ Stuff steady.

“It’s like going to the library and browsing the shelves and enjoying the books that way,” said Phoebe Gowdy, who has been renting from the store for the last 10 years. “We enjoy the movies that way and we get very good advice here.”

“We actually don’t have to spend a long time browsing because he knows what we like.”

Thompson said it’s that personal touch that has people coming back. That, and not everyone enjoys paying for multiple subscription services that are going up in cost.

There’s also a fair bit of hustle involved. Thompson works with a distributor to stock his shelves with the latest or rare releases — the key to keeping up with the competition, he said.

“I’ll search for them until I find them.”

No sequel for video rental stores

But don’t call it a comeback, according to Ottawa-based film reviewer Di Golding.

“I don’t think we’re going to see the video store back the way it was and maybe that’s OK. It’s like a perfect moment in time. It’s such a cultural thing,” she said.

Golding, who worked at Elgin Video that closed down nearly 10 years ago, believes streaming services have cemented the end of in-person rentals.

“There aren’t very many places that you can go where you can just hang out  … and then you can just leave and you haven’t done anything, but your life has just kind of been changed or opened a little bit from being around the movie experience itself,” she said.

“We don’t have that anymore. You know, I find that really sad.”

While Thompson also doesn’t expect a resurgence of video rental spots, he said he’s grateful to his neighbours that come in to talk and rent movies.

“There’s some nights when it weighs on you, right? You’re thinking to yourself, ‘OK. This is a model. It’s not gonna explode. You’re not gonna become busier,” said Thompson.

“Then there are other times I feel very proud.”