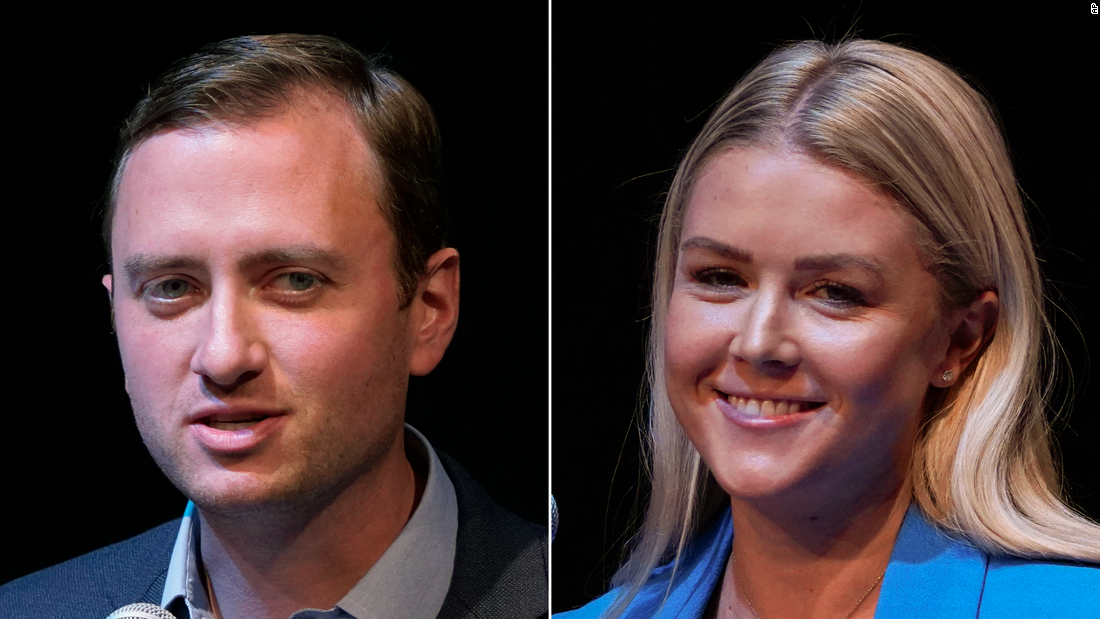 But in Tuesday’s race to be the Republican nominee in New Hampshire‘s 1st Congressional District, Republicans Matt Mowers and Karoline Leavitt are in a bitter fight that is more about style than substance, one that has fractured Republican loyalties and highlighted how running on Trump’s policies in a Republican primary is often not as potent as running like Trump himself.

Mowers and Leavitt are seen as the top two candidates in a sprawling field of Republicans seeking to take on Rep. Chris Pappas, one of the most vulnerable House Democrats in the country. With election forecasters tempering their months-old predictions of an overwhelming red wave election for Republicans this November, operatives on the right are looking at targets like Pappas as must-wins if the GOP is going to win control of the chamber.

“Watching these two try to out-Trump each other, with Matt trying to walk a fine line between talking up his Trump administration bona fides while also preserving his electability in a general election… has allowed an opening for Leavitt, who is running as this pure Trump, election-denying candidate,” said Fergus Cullen, a former chair of the New Hampshire Republican Party who is voting for Russell Prescott, a former member of the New Hampshire Executive Council.

Cullen said he won’t vote for Leavitt if she wins the nomination — “New Hampshire doesn’t need a Marjorie Taylor Greene or a Lauren Boebert representing us,” he said — a feeling that highlights the fears about a Leavitt win.

Recent polling shows the race is deadlocked. A Granite State Poll conducted by the University of New Hampshire and released in late August found Mowers at 26% and Leavitt at 24%, within the survey’s margin of error. A significant 26% of likely Republican primary voters were undecided.

Mowers’ ties to New Hampshire go back to the 2014 election cycle, when he worked as the executive director of the New Hampshire Republican State Committee. In the 2016 cycle, Mowers initially worked for Chris Christie as the New Jersey governor sought the GOP presidential nomination. But when Christie’s campaign failed, Mowers went to work for Trump’s campaign and, after the Republican’s victory, the State Department. Mowers, with Trump’s backing, then unsuccessfully challenged Pappas in 2020.

Although Mowers is running on Trump-backed policy — his website blares “Drain the Swamp” and has an entire page on “Election Integrity” — his style is more measured than the brand of politics that has defined Trump’s orbit of political acolytes, a caution that has opened the door to the more aggressive Leavitt.

Recent debates in the primary have highlighted these stylistic differences.

Earlier this month, when Mowers was asked if he had confidence in elections, the candidate said, “I have confidence in New Hampshire elections,” but added that there was space to “get better.”

That wasn’t good enough for Leavitt, who lambasted Mowers and echoed Trump’s lies about the 2020 election.

“I consistently continue to be the only candidate in this race who said that I believe the 2020 election was undoubtedly stolen from President Trump,” Leavitt said, turning her attack on Mowers by noting that he voted twice in the 2016 primary and saying Mowers agrees with Joe Biden that the President “legitimately won more votes than Donald Trump.”

These differences continued when asked whether Biden should be impeached.

Mowers was more cautious, calling for “hearings to look into these things.”

After the debate, which was hosted by WMUR, Leavitt put a finer point on her strategy: “Voters are finally waking up to who Matt Mowers is. He is a go-along, get-along politician who cannot answer a straight question,” she told the outlet.

The race has divided House leadership, too.

Reps. Kevin McCarthy and Steve Scalise, the top two Republicans in the House, have both endorsed Mowers. Leavitt, in addition to Stefanik’s support, also picked up endorsements from some of her party’s more far right leaders, like Reps. Jim Jordan and Boebert.

Money has flooded the race, with millions being spent to try to protect Mowers from a Leavitt surge.

Congressional Leadership Fund, the predominant House Republican super PAC, has spent nearly $2 million defending Mowers. Defending Main Street, a centrist Republican super PAC, has spent $1.2 million with ads that say Leavitt “pretends she is a conservative” and call her “woke,” “immature” and “irresponsible.”
Leavitt has responded to the outside spending with $285,000 of her own spending, including on an ad that attacks Mowers for voting in both New Hampshire an New Jersey during the 2016 primaries, accuses him of trying to “sabotage President Trump” and labels him a “another swamp doormat.”
She has also tried to turn the deluge of money against her into an attack against Mowers, venting on Twitter that she was “officially the top target of DC’s money machine” because “the Establishment knows I am the greatest threat to their handpick puppet Matt Mowers.”

Democrats have watched the primary with a mix of trepidation, joy and concern.

Collin Gately, a Pappas spokesperson, said the Republican primary has been dominated by “extremism and ugliness” and that none the candidates “have a clue about how to help New Hampshire families, and voters will reject their extreme agenda.”

But even the most upbeat members of the party acknowledge that Pappas is vulnerable. Still, many believe that the contentious GOP primary — along with the fact that the race is concluding in September, less than two months before the general election — could help the New Hampshire Democrat win.

In response to the President’s plan to cancel some student loan debate, Pappas said it “should be more targeted and paid for so it doesn’t add to the deficit.”

And he knocked Biden’s description of Trump’s following as “semi-fascist” days before the primary, telling reporters that Biden “has to be careful not to paint with too broad of a brush.”

Mowers is married to a senior video producer at CNN.

Premarket stocks: The Fed is fighting inflation. Could deflation be its next battle?

One-of-a-kind glow in the dark pumpkins