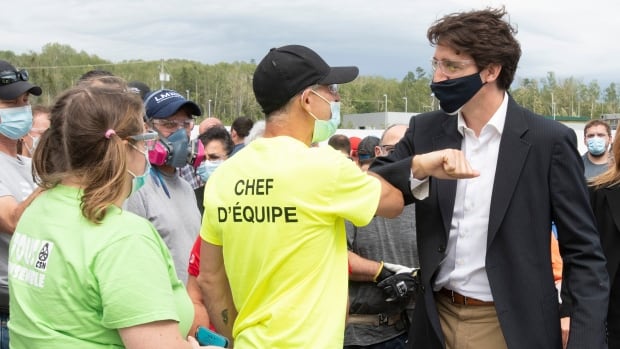 
While the Prime Minister’s Office insists that the recent series of government announcements is merely business as usual, the major parties appear to be in full pre-election mode as their leaders fan out across the country to meet voters.

Experts say they’re not surprised, that minority governments tend to last about two years and prefer to call elections when they see the conditions are ripe to win a majority. If recent polls are to be believed, that’s the position the Liberals find themselves in now.

“No government has been in the unique situation that the current one has, where a country has just gone through a … pandemic and there is a mood of positivity, of relief, that is coming in,” Conservative strategist Tim Powers told CBC News.

The three major national federal political parties have been getting their leaders out in front of voters lately, road testing policy announcements and working on campaign logistics.

Prime Minister Justin Trudeau held two events in Quebec this week and there are plans in the works for him to do a short tour of Eastern Canada next week.

Trudeau is on holiday for the first week in August. Sources have told CBC News that Liberal party staffers have been told to ensure their vacations are over and they’re back in Ottawa by Aug. 9.

Conservative Leader Erin O’Toole visited Alberta, British Columbia and Saskatchewan this week and there are plans in the works for him to tour parts of Atlantic Canada next week, although a party spokesperson said those plans could change.

A spokesperson for the NDP said the party is assuming an election call is imminent and will keep leader Jagmeet Singh on the road attending events until the call comes.

Singh is touring Southwestern Ontario this week before heading off to Alberta to visit the Calgary Stampede on Saturday and Edmonton on Sunday.

The week after that, Singh will be in Ottawa meeting with his caucus before heading back out on the road for two weeks of travel through Northern Ontario, Manitoba and Nunavut.

The NDP spokesperson said the party’s campaign plan is in place and it will have its plane and bus ready to roll by early August.

“What the parties are trying to do right now is test message, test framing. Each party is trying to frame up the ballot box question and they are trying to make sure they are being seen in those battleground ridings.”

Monk said the parties are also trying to gather video and photographs now that they can use during the campaign. She said Singh’s team shot footage of him when he was in B.C. last week, just as Trudeau’s staffers did in North Vancouver around the same time.

Powers said that O’Toole’s trip out west this week allowed him to get in an early visit to safe Conservative ridings so that he can focus on Ontario and Quebec, where he really needs to pick up seats.

“You also go to the areas of the country where you need to gain support, you do the work that you need to do, you go to places that you may not get to during the campaign because you have to focus on other key areas,” Powers said.

The NDP has not purchased Facebook ads in the past month but the Conservatives have spent $31,989 on their own ads.

Monk said she was surprised to see such a small ad purchase by the Conservatives, since the party has been so successful at fundraising. A party spokesperson said Canadians should “stay tuned” because more ads are coming.

Observers still warn that while they expect a late-summer election call, things can change quickly.

“There’s lots of signals, but we never know until Trudeau actually walks across the street and sits down with the Governor General. Then we’re off,” Monk said.

Playing ‘a hot mess’ in Never Have I Ever, Canadian actor Maitreyi Ramakrishnan wants to shake up conventions