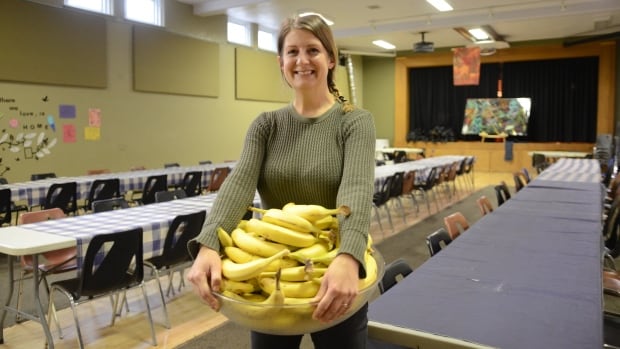 The face of poverty is changing. This woman is feeding more mouths than ever


The face of hunger is changing in London, Ont., as more people are feeling the effects of food insecurity close to home.

Londoners working on the frontlines of the food crisis are seeing record numbers of need as food prices soar. At the Ark Aid Mission, the need for food has more than doubled over the pandemic. Now, about 150 people come for lunch and 200 for supper. Just a couple of years ago, around 60 people would stop by for a meal, staff said.

The increase concerns Amy Ford, who works as food and nutrition manager at the Ark Aid Street Mission. She’s seen the effects of food insecurity firsthand, and more people grapple with rising expenses.

“I have seen hunger change a lot in London,” said Ford, who started volunteering at the mission more than 20 years ago before joining the staff this fall. “I think that poverty and homelessness and hunger is just expanding to so many more people.”

Despite inflation slowing, food keeps getting more expensive. In fact, it’s rising at its fastest pace since 1981 — and more people are feeling the pinch.

The result is hundreds of different faces in need of emergency remedies for hunger.

“People may not realize that some folks who eat here actually have jobs, and they just don’t make enough money to pay for all of the things that are required for life,” said Ford, who added seasonal jobs, inflation, job loss, barriers related to disabilities and break-ups are just some of the reasons she’s heard of for people needing a meal.

People who were just getting by really aren’t anymore, she said.

“We also hear about, unfortunately, families that don’t have enough. Sometimes the children will be able to eat, but the parents have to come and grab a bite, and that’s always really heartbreaking.”

Food insecurity has hit record territory this year in London, with 20,000 people unable to afford food, according to the London Food Bank.

Ark Aid provides daily meals out of their temporary location at First Baptist Street at 568 Richmond Street, along with laundry and clothing facilities, while their Dundas Street building is under renovation.

Food insecurity in London is a problem Ford said needs to be tackled from a two-prong approach — with emergency solutions to immediate needs as well as systems-based thinking leading to bigger solutions that could “eliminate the need for non-profits to be feeding people because our city is thriving in such a way that people are able to have access to food in more dignified ways.”

Combating food insecurity led Ford to Ottawa last week to attend Hunger on the Hill with farmers, nutritionists, researchers and advocates from across Canada with the Canadian Foodgrains Bank.

On CBC’s Afternoon Drive, Gordon Janzen of the Canadian Foodgrains Bank said “It’s been a particularly difficult year in terms of global food security” with the number of people experiencing crisis levels of hunger globally increasing by 40 million people to 193 million.

While the focus of Ford’s advocacy work was global, she saw a strong link to hunger in London.

“We do have a global food system, and what happens in other countries does affect what happens here,” she said.

“Hunger, regardless if it happens down the street or far away to a place I’ve never been, is an injustice. And as Canadians, we need to do something about it. For me, it’s all connected.”

'Doggone it': Pups banned from cemetery after urinating on plots

Mouth taping during sleep can be dangerous, experts say