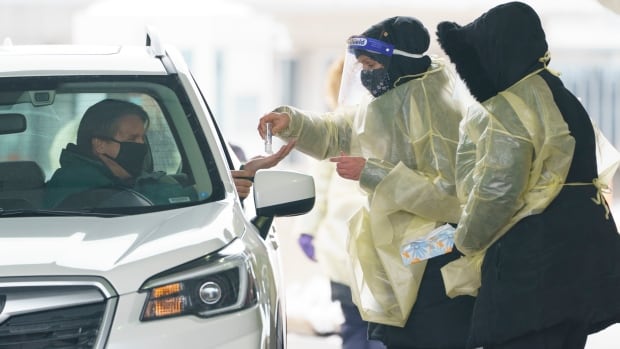 
The federal government’s pandemic border measures — including random testing for vaccinated travellers — could be coming to an end soon. It might not be soon enough for many travellers and tourism operators.

Sources told CBC News that the government is likely to end all of the measures in the near term and the final decision is awaiting Prime Minister Justin Trudeau’s approval. The measures were set to expire on Sept. 30.

Cathy Pudlewski said she had such a terrible experience after being tapped for a random test that she could only compare it to “being almost harassed.”

The 73-year-old from Lancaster, New York said she was crossing the border to nearby Niagara-on-the-Lake, Ont. to see a play in mid-August when she was told she would need to complete a test and was handed a testing kit.

Pudlewski said she was so overwhelmed by the complex instructions that she asked a local pharmacy to schedule a virtual testing appointment to take place after the play ended.

“I couldn’t enjoy [the play] one minute,” she said.

She said she was on the verge of tears as she took the test in the theatre lobby with help from an employee. After completing the test, she said, she learned she would have to drive to another city — St. Catharine’s — to drop the test in a FedEx box. She said the ordeal added three hours to her trip.

Pudlewski said that, since she was in Canada only for the day and wouldn’t learn her results until after she got home, the idea that she was protecting Canadians is “preposterous.”

“I am all for vaccinations and keeping everyone safe and healthy, but this is beyond the pale,” Pudlewski said, adding that she won’t be coming back to Canada until the random testing requirement is dropped.

It’s a refrain that tourism operators have been hearing from a number of visitors, said Laurie Marcil, executive director of Nature and Outdoor Tourism Ontario.

“We are hearing from guests that they won’t be back because it’s been such a negative experience,” she said of visitors who have been selected for random tests.

Marcil, whose organization represents tourism operators in Northern Ontario, said the process is particularly onerous in remote locations where the cell service needed to register for a test is spotty, and courier locations are few and far between.

She said some of her members have taken it upon themselves to help guests register and arrange for couriers to pick up tests — things she said they shouldn’t have to do.

“The owner of a lodge who’s got maybe 40 guests in, they have a lot to tend to. So having to deal with these sort of crisis-at-the moment type situations is very, very difficult,” Marcil said.

Random testing moved away from airports

Foreign travellers aren’t the only ones complaining about the random testing requirement. Toronto’s Paul Milgram was tapped for a random test after coming home from a work trip to London, U.K. in August.

The government moved random testing out of airports in the summer to help alleviate some of the backlogs and long lineups air travellers had been experiencing. It instead allowed private offsite labs to conduct the tests.

Milgram said that after receiving an email telling him to register with LifeLabs to complete a test, he was sent on a digital wild goose chase, without clear instructions on how to fulfil the federal requirement.

“Why should I have to do research in order to carry out the test? They should be sending me and telling me exactly what to do,” he said after spending about an hour trying to register.

Milgram said he also sought help from a pharmacy and was able to get a test without an appointment.

He said that while he wasn’t opposed to getting a test, the hoops he had to jump through to get one were “dumb.”

The government says it has earmarked up to $1.1 billion for its arrival testing regime. Some medical experts say there are more efficient ways to monitor for COVID-19 in travellers.

“You can do wastewater surveillance where you can very likely answer the exact same questions and inconvenience few people, do it in a much more cost effective manner,” said infectious disease expert Dr. Isaac Bogoch.

Wastewater testing has become a vital tool for tracking the spread of the virus. Dr. Bogoch said replacing the random testing regime could be a simple matter of monitoring wastewater at airports and on airplanes.

On Tuesday, a group of MPs and border-city mayors published an open letter calling on the Canadian and U.S. governments to end their pandemic border measures, including Canada’s randomized testing regime.

“We have been left behind in the recovery effort as both countries have largely returned to normal daily life,” the letter says.

Teen shot to death while lying in bed, JPD says