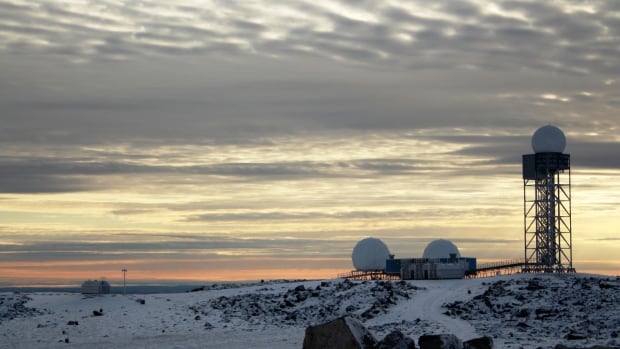 The DEW Line at 65: Future unclear for the North’s aging radar sites

Many of the 60-plus radar sites, built on the northern tundra in the 1950s, have long since gone the way of so many other Cold War relics around the world, abandoned and dismantled. Others were rebuilt to form parts of the successor North Warning System.

This July will mark 65 years since the first phase of the DEW Line became operational. The concept behind it was straightforward — it would detect bombers if Soviet Russia were to launch a nuclear attack on North America via the shortest route, over the Arctic. It was to act as a deterrent.

Within a few years it was largely obsolete. Some of the radar sites were upgraded in the 1980s to be part of the North Warning System, now jointly operated by the U.S. and Canada.

But that system is aging too. And with renewed anxiety over Russian aggression, and North America’s security and surveillance, there are questions about whether a string of decades-old radar sites have much to offer anymore.

“I think the North Warning System as it exists today will be replaced rather than renovated,” said Adam Lajeunnesse, an Arctic security analyst at St. Francis Xavier University.

“And what it will be replaced by is the big question.”

The federal government has promised some major investments to modernize NORAD but has not offered any specifics yet. Defence Minister Anita Anand recently told CBC’s The House that a plan was in the works to increase defence capabilities in the Arctic and North America.

Asked about an Ottawa Citizen report saying Canada would spend $1 billion on a new radar system in Southern Canada, Anand did not confirm it.

“Canada is doing its part in terms of modernizing NORAD,” she said. “I will have more to say on this very soon.”

Defence Minister Anita Anand details her discussions with close allies in two big meetings this week and how billions of dollars in new defence spending will be used. 11:40

Construction of the DEW Line, conceived by the U.S. Air Force as a series of manned radar stations scattered in a line “twisting across arctic wastes” (in the language of the U.S. military documents) began in 1954 with the agreement of Canada. The U.S. paid for most of it, while Canada took pains to publicize it as a joint effort.

Building it was no picnic, but considering the harsh climate and remoteness of the chosen sites along the 68th parallel, it was done within a remarkably short period of time.

The DEW Line has a mixed legacy, says Natan Obed, president of the national Inuit organization, Inuit Tapiriit Kanatami. It’s something he and many Inuit have thought a lot about, he says.

“I can think off the top of my head of a dozen different communities that have the infrastructure that they do only because of the militarization in that time frame,” he said.

At the same time, Obed says, the Northern development that came with the DEW Line was not conceived with the specific needs of Inuit in mind.

“It wasn’t really community-building,” he says.

Inuit were often employed to work at the sites, and for some it was their first introduction to wage labour. Housing for DEW Line workers would follow and Inuit were encouraged to move into communities.

Speaking to the Inuit-led Qikiqtani Truth Commission many years later, elder Joe Piallaq of Hall Beach, Nunavut, recalled doing labour at the nearby DEW Line site as a young man. He talked about how he and his brother bought a motor, some tents and ammunition with their pay.

“At the time, we were just pleased with whatever we were paid with,” Piallaq said, in Inuktitut.

Today, the North Warning System is operated and maintained by the Inuit-controlled Nassituq Corporation, under contract to the federal government.

In a statement announcing the seven-year, $592-million contract earlier this year, the Department of Defence said it would “continue to invest in the operation and maintenance of the current [North Warning System] until a suitable replacement is put in place.”

Built for another era

The construction and operation of the DEW Line may have permanently altered life in the North in the 1950s but according to Lajeunesse, the warning system itself was virtually obsolete within a few years.

“It was built for an era of manned bombers,” he said.

“Within probably half a decade, certainly within a decade, of its construction, the Soviets were relying on ICBMs [intercontinental ballistic missiles] as their primary delivery mechanism for their strategic weapons.”

By the 1980s, the DEW Line — as a series of manned radar stations — was no more. A decades-long cleanup project would begin of some of the sites and the rest were folded into the North Warning System.

That system is now also largely obsolete according to Rob Huebert, an Arctic defence specialist at the University of Calgary.

“The fact of the matter is that we have not modernized it or done anything with it since 1985,” Huebert said.

“It’s marginally useful in being able to determine and detect ICBMs. So in other words, the really big ones that will be the end-of-the-world type missile — we can detect those, sort of … but it will not allow you to detect hypersonics.”

Hypersonic missiles can travel at more than five times the speed of sound and have vast ranges. The technology can bob and weave through the atmosphere and avoid interception en route to its target. NORAD commander Gen. Glen VanHerck warned top Canadian government and military leaders last fall that the threat hypersonic missile technology poses to North American security was making it “very challenging” for him to carry out his mission.

Huebert was alarmed by Russia’s invasion of Ukraine in February. He believes the authoritarian Putin regime wants to destabilize NATO and so Russia represents “a growing existential threat to Canadian security.”

“The aerospace and maritime threat is real and it’s growing,” Huebert said.

He does not suggest the likelihood of any sort of land invasion in the Canadian Arctic. Rather, he imagines Putin targeting NATO bases in Eastern Europe, preceded by efforts to “neutralize” a North American response.

“And so one could very easily conceive the utilization of hypersonics to, for example, take out elements of the North Warning System, take out the American base at Thule [Greenland], take out Fort Elmendorf [Air Force Base, Alaska].”

Heubert agrees that NORAD needs a major update, and the North Warning System is no longer adequate.

“Just looking across the northern coastline doesn’t cut it. You need to be able to look right across the entire entity of North America,” Huebert said.

Lajeunesse also refers to a “broader set of dangers” and says a string of radar stations in the Arctic may no longer be top priority.

“The next NORAD isn’t just going to be a big building with a dome. It’s going to be a very complex set of sensors tied into a broader network to watch everything from hypersonic cruise missiles to Chinese fishing fleets,” Lejeunesse said.